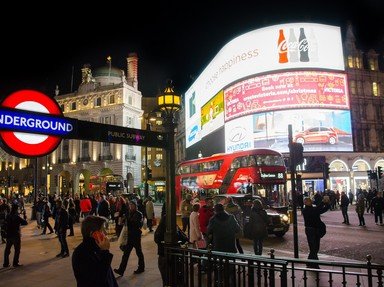 I love all you delightful quizzers, who play my quizzes and send me notes, but more than chocolate? I'm not so sure about that. If you love chocolate as much as I do, can you match these slogans to the products they advertised in the UK?

Fry's Turkish Delight has been available since 1914, made by J S Fry & Sons originally, and keeping the name even after Fry's merged with Cadbury's in 1919. The 'full of Eastern promise' slogan has been around for many years, with television adverts featuring pan pipe music, which doesn't seem particularly Turkish, and lots of sand dunes. Miraculously, the chocolate never seemed to melt despite the desert setting.

A little goes a long way with these bars, as they are quite sweet and sickly.
2. A taste of paradise

The Bounty bar was introduced in the UK by Mars Inc. in 1951, and consists of a coconut filling surrounded by chocolate - originally just milk chocolate but with a dark chocolate version introduced later. The 'taste of paradise' slogan has been used since at least the 1980s and adverts usually involve a lot of sandy beaches, palm trees and tropical islands.

As for the bar itself, I detest coconut, so can't comment on whether they taste of paradise or not.
3. P-P-Pick up a

If in doubt, choose the alliterative option! Penguins consist of two chocolate flavoured biscuits, sandwiched together with a chocolate cream filling and covered with (you guessed it) chocolate. They are made by McVitie's, who are primarily biscuit manufacturers. The 'P-P-Pick up a Penguin' slogan was introduced in the 1980s in television advertising.

The Australian Tim Tam biscuit is very similar to the original Penguin, supposedly being an 'improved' version. I couldn't possibly comment on that assertion, though.
4. They grow on you

Made by Cadbury's, Roses chocolates are a variety of individually wrapped chocolates with different fillings. The shops are full of boxes of them in the run-up to Christmas (from about September, it seems). The 'Roses Grow on You' advertising campaign was fronted by the comedian Norman Vaughan in the 1960s.

Fillings include fudge, hazelnuts, coffee cream and strawberry cream, with the latter flavour seeming to be much more numerous in the boxes I receive. In any event, they are the ones left in the box when everyone else has chosen their favourite.
5. If you like a lot of chocolate on your biscuit

The full slogan was 'If you like a lot of chocolate on your biscuit, join our Club' and began in the mid 1970s, running for twenty years or so. Club biscuits were originally made in Ireland and consisted of a biscuit bar covered by a generous coating of chocolate.

The original range has greatly expanded and now includes biscuits flavoured with orange, mint and fruit. A biscuit and lots of chocolate - what's not to like?
6. Just enough to give your kids a treat

I'm not sure that eating between meals is recommended, but the creator of the jingle was none other than Mike d'Abo, who replaced Paul Jones as lead singer of Manfred Mann. I suspect he'd rather be remembered for 'Handbags and Gladrags'.
7. Smooth on the outside, crunchy on the inside

This bar is a Swedish creation and consists of a chocolate covered solid caramel, hence the slogan of being smooth outside and crunchy inside. The bar was supported by a rather bizarre advertising campaign in the 1990s, fronted by comedian Harry Enfield, who claimed to prefer armadillos to Dime bars, as they were 'crunchy on the outside and smooth on the inside'.

In many countries, the bar is now sold as a Daim bar, but we traditional Brits don't like change, so, to us, it's still a Dime bar - not that I can recall seeing one recently.
8. It's not Terry's, it's mine

The advertising campaign referred to in the question featured Dawn French, who actually looks as if she might occasionally eat the product she's selling. The slogan referenced the maker's name, which is also used as a first name, with Dawn also, at other times, advising us 'Don't tap it, whack it'. Getting into a chocolate orange can be challenging!
9. Why have cotton when you can have silk

The Galaxy bar, known as Dove in some countries, was introduced in the UK by Mars in 1960. The slogan 'why have cotton when you can have silk' was first used between 1987 and 2000. It was trademarked by Mars in 2012 and used again as the strapline for adverts running from 2013 and featuring Audrey Hepburn - brought back to life by computer wizardry.

Galaxy was the second best selling chocolate bar in the UK in a 2014 survey. Mars has brought out a white chocolate version, which seems to be available only in the United Arab Emirates at the time of writing. It's just as well, really. It's already hard enough to choose a chocolate bar from the many available.
10. You're spoiling us, Mr Ambassador

Created by the Italian firm of Ferroro, these chocolates have been available in other parts of Europe since 1982. The chocolate consists of several layers, including nuts, a wafer shell and hazelnut chocolate (Nutella), covered with chocolate and more nuts and individually wrapped in gold paper.

An advertising campaign of the 1990s involved platters of the chocolates being offered to guests at an up market party in an Embassy, hence the slogan quoted in the question. The campaign, according to my research, was entirely serious but has been much parodied and mocked as being ridiculous. Whatever the truth, the advertising paid off, at least to the extent that most people have heard of it. Whether it sold more of the chocolates, or put buyers off, I'm not qualified to say.
Source: Author rossian

Here's the third quiz list of the quizzes I've written for commissions, where other players give you a title to work with.


1. Axis: Bold as Love Easier
2. Why I'm in Love with Science Very Easy
3. I'm a Man, Not a Boy Average
4. Love You More Than Chocolate Easier
5. Long Day's Journey into Knight Average
6. Fifteen Minutes to Save the World Easier
7. Help Me Find My Parent Very Easy
8. Anita and Me Very Easy
9. Dyed in the Wool Average
10. Eclectic Pubs of the World Average
11. Castle in the Air Easier
12. Her Best Friend Easier