Not all rides on ships are pleasure cruises, even if they started out that way. Here are some questions about some ships that now reside in Davy Jones Locker.

Quiz Answer Key and Fun Facts
1. The sinking of which British Cunard passenger ship in 1940, caused a greater loss of life than the sinking of the Titanic and the Lusitania combined?

When the Lancastria was sunk off the coast of France, it was participating in the evacuation of British troops and civilians from that country. Over 4,000 lives were lost when this ship was sunk by a German air attack on June 17, 1940. The sinking of the ship was to cause the greatest loss of life in British maritime history.

It is estimated that about 2,000 lives were saved by passing ships, who stopped to help despite the fact that they themselves were under fire. The story was suppressed in British newspapers for over a month.

It was not until the American press reported on it that the British found out about the incident.
2. The MV Wilhelm Gustloff is a very distinct shipwreck for which of the following reasons?


Answer: Greatest loss of life in any 20th century shipwreck

Although the numbers vary, the MV Wilhelm Gustloff is usually credited as having the greatest loss of life when sunk. This cruise ship had been changed into a hospital ship, as had many cruise liners during the war. The ship was sunk by a Russian submarine while it was trying to evacuate German soldiers, and civilians from Gdynia, Poland.

There were also over 4,000 children on board. It was a bitterly cold night and there was some ice in the water. Most figures put the loss of life at over 9,000 people.
3. All passengers and crew from the MTS Oceanos were rescued when the cruise ship sank off the coast of South Africa in August of 1991.

This statement is true and the gallant rescue efforts were filmed live and shown around the world. The ship had just had a major overhaul after sinking into a shocking state of disrepair. When the ship sailed into a bad storm off the coast of South Africa, it started to leak.

The passengers were not notified that the ship was sinking until long after the captain and crew had packed their belongings and sent an SOS. While there was much to criticize, there were many actions to be admired.
4. What type of ship was the MV Dona Paz, which sank with great loss of life off the coast of The Philippines in 1987?

The MV Dona Paz was a passenger ferry boat that sank of the coast of Manila after colliding with the oil tanker MT Vector. When the two ships collided the contents of the Vector ignited and spread to the Dona Paz. Witness' told stories of the sea, itself, being on fire.

The Dona Paz tragedy took the lives of over 4,300 people. Survivors were forced to jump into shark infested waters without life jackets which had been inadvertently locked up. Within two hours the Dona Paz lay on the bottom of the ocean.

The Vector sank within 4 hours after losing most of the men on board to fire. It was over 8 hours before authorities learned of the accident and began any kind of rescue operations.
5. The sinking of the Cospatrick in 1874 is considered one of which country's worst civil disasters?

This was a dangerous trip that involved sailing around the infamous Cape of Good Hope. Another reason that this ship is remembered is that five survivors were found in a life boat, of which two later died.

These men had survived by practicing cannibalism on their dead shipmates.
6. The HMHS Britannic, which sank in 1916, was the sister ship to which other famous ship?

HMHS Britannic was the sister ship to the RMS Titanic which sank on its maiden voyage with great loss of life. The Britannic sank in 1916 during World War I, off the coast of the Greek island of Kea in the Aegean Sea. Originally constructed as a luxury passenger liner the Britannic was converted to a hospital ship during the war, as were most luxury liners. Even though this ship sank, only 30 lives were lost, in large part due to what was learned from the sinking of her sister ship four years before.

The shipwreck was first discovered and explored by Jacques-Yves Cousteau in 1975.
7. The RMS Empress of Ireland sank with a loss of life of over 1,000 people when it sank in which of the following bodies of water?

The veracity of this claim cannot be substantiated.
8. What natural phenomenon is to blame for the sinking of the MV Princess of the Stars, on June 21,2008?

The MV Princess of the Stars capsized in the waters off of the Philippines in 2008 with complete loss of life after getting caught in the middle of Typhoon Frank. This sinking of this passenger ferry cost over 800 lives and only 32 people managed to survive.

This passenger ferry was also laden with the pesticide endosulfan. While this was not the only ship lost in that typhoon it did cause one of the greatest losses of life. There was an uproar over why the ship was sailing when it was known a typhoon was coming.

There were also questions as to why a passenger ship of any kind would be loaded with pesticides.
9. The passenger ship RMS Carpathia saved hundreds of people when the Titanic sank and then sank herself six years later.

The captain of the Carpathia and his crew were given numerous medals for their quick actions. It was not enough to save them, when they were torpedoed in 1918 in the Celtic Sea by a German submarine. At the time they were sunk, they were acting as troop transport. Evacuation was carried out in an orderly fashion and all passengers and crew boarded the lifeboats.

The submarine was approaching the lifeboats and getting ready to fire when the HMS Snowdrop arrived and started to return fire. Most of the crew and all of the passengers were saved.
10. The SS Andrea Doria sank in 1956 after colliding with which of the following ships?

The rescue and subsequent sinking was televised world wide. The Andrea Doria lays on its side in 160 ft. (50m) of frigid water. Experienced divers consider it one of the most difficult shipwrecks to visit and have nicknamed the wreck "The Mount Everest of Scuba Diving".
Source: Author dcpddc478

This quiz was reviewed by FunTrivia editor bloomsby before going online.
Any errors found in FunTrivia content are routinely corrected through our feedback system.
Most Recent Scores
Dec 30 2022 : Guest 107: 9/10
Dec 08 2022 : Guest 86: 4/10 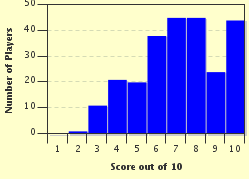 Related Quizzes
This quiz is part of series Maritime and War Quizzes:

A few quizzes about maritime and war topics.