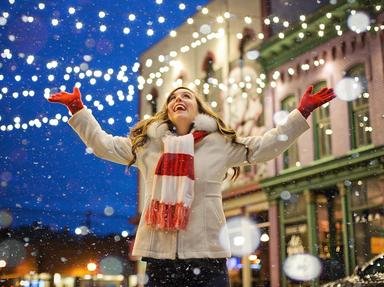 Quiz Answer Key and Fun Facts
1. Where is the first documented evidence of the use of a Christmas tree?

Documented evidence for the first Christmas tree comes from Riga, Latvia. In the town square there is a plaque which reads, ""The First New Year's Tree in Riga in 1510" in eight languages. Apparently there is also a claim that the first Christmas tree was in Tallinn, Estonia. An account from the House of Blackheads, which was a German merchant/ship captain guild, refers to celebrations in Riga prior to the 1510 celebration, and also indicates that the tree was decorated.

There is not very much information available about the first Christmas trees. Sources agree that they were attended by men in black hats and burned at the end of the ceremony; the burning of the Yule log dates back to pagan times in Scandanavia. The log was actually an entire tree that was brought into the house.

The largest end was placed in the fireplace, and a fire was started with the remains of the previous year's log. Christians later adopted the practice, and the log was burned during the Twelve Days of Christmas.

As this tradition spread throughout Europe, different types of wood became traditionally used in different regions. For example, in England the log was oak, while in Scotland, birch was used.
3. The first Christmas tree might have been derived from the use of the "Tree of Paradise" in medieval plays. What were these plays called, that frequently taught stories from the Bible?

Because the majority of medieval people were unable to read the Bible, they had to learn its teachings in creative ways. Sacred stories were performed as plays. At first the plays were performed by the clergy in Latin in the church; later it became common for lay people to perform using the vernacular.

The plays were very popular, so they were moved to the marketplace to accommodate a large audience, and were called mystery plays because they told the stories of unusual events from the Bible. It is possible that the tradition of the Christmas tree was taken from the use of the Paradise Tree used during mystery plays that were performed on Christmas Eve, which was considered Adam and Eve's Day.

The Paradise Tree represented the Garden of Eden.

Incidentally, during medieval times there were three types of plays: a mystery play, a miracle play, which was associated with miracles performed by Jesus and the saints, and a morality play, which was to teach moral instruction.
4. There is a legend that an early Christian missionary working among German pagans cut down an oak tree after he found them preparing a human sacrifice there. A new fir tree immediately sprang from the roots of the oak tree. Who was this saint?

Saint Boniface of England was preaching among the pagan Getmans when he came across the preparations for a human sacrifice. Angry and wishing to stop the sacrifice, he cut down the oak tree. When a fir tree sprang up for its roots, Saint Boniface took it as a sign of the Christian faith. Using candles, he and his followers decorated the tree so that he could preach at night.

Another story tells that Boniface was cutting down the Donar Oak or Jupiter's Oak when a wind came and blew the tree down.

The pagans were amazed that Jupiter did not strike Boniface down, and immediately converted. Were these stories told to show that Boniface rooted out paganism? He is the patron saint of Germania, and is called the "Apostle of the Germans".
5. Which great religious reformer is given credit for being the first to bring the Christmas tree inside his home?

While some believe the story to be a legend, it is written that Martin Luther was walking through the forest on Christmas Eve preparing a sermon when he saw the stars shining through the tree branches. He brought the tree inside, and attached lighted candles to its branches to share the beautiful sight with his family.
6. How were the first Christmas trees traditionally decorated once they were brought into the home?

Many sources state that the first Christmas trees brought into the home were decorated with edible treats, such as apples, nuts, and gingerbread. In addition paper roses and candles were used. Eventually glass ornaments were also made. Tinsel, which was hammered from thin pieces of silver, was also invented in Germany. Written in 1605, one German source describes, "At Christmas they set up fir trees in the parlours of Strasbourg and hang thereon roses Cut out of many-coloured paper, apples, wafers, gold foil, sweets, etc."
7. Which type of ornament most likely was placed at the top of the first Christmas trees placed inside the home?

The tops of the first Christmas trees were usually decorated with a likeness of the Baby Jesus. Later on, stars, which represented the Star of Bethlehem, and angels, representing the angels telling the shepherds of Christ's birth, were used.
8. One of the stories concerning the first Christmas tree in England credits Prince Albert, who was the Prince Consort of which queen?

Queen Charlotte was from the German duchy of Mecklenberg-Strelitz, where the Christmas custom was to decorate a yew branch. She brought the custom with her when she married George in 1761, and took what had been a rather private solemn observance in her homeland, turning it into more of a public, joyous occasion in her home.

It is said that she decorated the bough herself, putting it in the largest room, after which the entire Court sang Christmas carols. In 1800 the Queen decided to use an entire tree rather than just a bough, decorating it especially for the children to enjoy. Queen Charlotte brought the idea of the Christmas tree to the upper class who attended her parties.
10. The use of the evergreen tree to decorate for holiday celebrations existed prior to the introduction of Christianity.

Actually the use of evergreen boughs as a special symbol is a long-celebrated tradition. The Druid pagans used the evergreen to decorate their temples during the winter solstice to symbolize the coming of Spring and everlasting life. The Romans decorated their temples and homes with fir trees during the Saturnalia to symbolize the upcoming growing season. Scandanavians believed the evergreen to be the special plant of the God, Balder. Christians use it as a symbol of everlasting life.
Source: Author ponycargirl 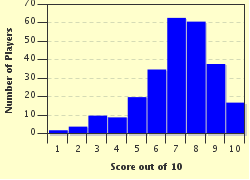 Related Quizzes
This quiz is part of series Christmas:

Christmas is a season not only of rejoicing but of reflection. Winston Churchill