How much do you know about the 1965 Mustang?

Quiz Answer Key and Fun Facts
1. How many body styles were there to choose from in 1965?

There were 18 exterior colors available in 1965, including Raven Black, Champagne Beige, Poppy Red, and Sunlight Yellow.
3. All 1965 Mustangs came equipped from the factory with back up lights.

Back-up lights were a factory option, and cost $10.70. In addition, power brakes were $42, padded visors were $4.70, and air conditioning, the most expensive option, was $283.
4. Prior to its official release, by what name did the Ford company refer to the Mustang?


Answer: All of these names are correct.

Inside Ford, the car was called by one of the above names as late as September 1962. Ford stylist John Najjar, inspired by the P-51 Mustang fighter bomber that was flown in World War II, suggested that the new car be called by the same name. Ford's advertising agency, J.W Thompson, was asked to develop a list of names for the car.

The list contained 6,000 names; the final six were: Cougar, Bronco, Puma, Cheetah, Colt, and Mustang. From November 1962 onward the new car was called Mustang.
5. In 1965 three factories built the Mustang. Choose the location that did not.

The code for the factory is part of the vehicle's VIN number. Dearborn is coded F, R represents San Jose, and T stands for Metachen.
6. Mustangs were built in 1965 with an option of either bucket seats or bench seats.

Although more cars were sold with bucket seats, bench seats were an option. There were 2,111 Convertibles and 14,905 Coupes made with bench seats.
7. The Pony Interior was available as an option in 1965.

People who wanted to splurge could spend $107.08 on the Interior Decor Group, which is commonly called a Pony Interior. It features the Ford Mustang emblem and a galloping pony.
8. How many total Mustangs were made in 1965?

A total of 559,451 Mustangs were made in 1965.
9. According to Carroll Shelby, the '65 Mustangs looked like they were marketed with which group in mind?

Carroll Shelby was the first to call the Mustang a "secretaries car." He was brought into the project to give the Mustang a bolder image. Between 1965-1970 approximately 13,900 Shelby Mustangs were produced.
10. Who was the director of the Ford project to build a show car demonstrating the "Total Performance-Powered by Ford" concept?

Lee Iacocca is considered to be the Father of the Mustang. Stanley Tucker, a Eastern Provincial Airlines pilot, saw a Mustang convertible at his hometown dealership two weeks before the debut. He bought the car on the spot, and became the first owner anywhere in America.

His car carried the serial number 100001. Although Tucker did not want to give up his car, he traded his first Mustang with 10,000 original miles (after a lot of negotiating) with Ford Motor Company for a new 1966 Mustang convertible. Today is the car is in the Henry Ford Museum in Dearborn, Michigan.
Source: Author ponycargirl 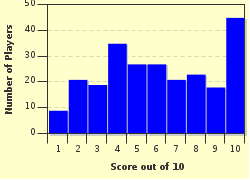 Related Quizzes
This quiz is part of series Cars!!:

My name is ponycargirl! Need I say more? My husband is a car guy. I am a car girl who loves Ford Mustangs!


1. End Of The Line! Average
2. Tales of the Car Run Average
3. Who's Who: Radiator Springs Easier
4. Smokers Outside the Hospital Doors Easier
5. The 1965 Mustang Tough