This quiz is about plurals of French nouns and adjectives.

Quiz Answer Key and Fun Facts
1. What is the correct plural form of the French word "Monsieur"?

Words ending in "-ou" form their plurals with an "s". However, seven French nouns ending in "-ou" form their plurals by adding "x": "bijou" (jewel), "caillou" (pebble), "chou" (cabbage), "genou" (knee), "hibou" (owl), "joujou" (toy) and "pou" (louse).
3. When used as an adjective, the French word "marron" is invariable whether it is masculine or feminine, singular or plural.

French adjectives of colors agree in gender and number, but "marron" (brown) is also a noun meaning "chestnut". When color adjectives derive from nouns of fruits, they do not agree with gender and number: for example "des foulards orange" (orange scarves); "des chaussettes rouge-cerise" (cherry red socks).

When "marron", "cerise" or "orange" are nouns, they do form their plurals with an "s": "des marrons", "des cerises", "des oranges".
4. Which of the following French plural forms is NOT correct?

Even though the correct plural of "ail"(garlic) is "aulx", it is very seldom used. Furthermore, the "Académie Française" (France's official authority on the usage, vocabulary, and grammar of the French language) approved the usage of the plural "ails" (see French dictionary Larousse). Yet in French, "des gousses d'ail" (cloves of garlic) and "des tętes d'ail" (heads of garlic) are usually used to express the plural form.
5. Which of the following French plurals is incorrect?

The plural of "coffre-fort" (safe for the storage of valuables) is "coffres-forts". "Coffre-fort" is a compound noun made up of a noun "coffre" (box) and an adjective "fort" (strong). When compound nouns consist of two nouns, or a noun and an adjective, or two adjectives, both parts take the plural form. On the other hand, "couvre-lit" (bedspread) is a compound noun made up of a verb (couvrir) and a noun (lit). Only the noun takes the plural form: "un brise-glace" (ice breaker) - "des brise-glaces".
8. Which of the following French plural nouns is NOT correct?

Both masculine and feminine form their plurals by adding "s" to their singular forms : "veuf - veufs", "veuve - veuves".
10. Which of the following numbers is NOT correctly spelled out in French? 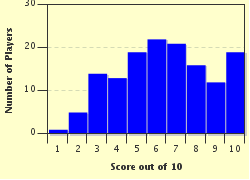 
Other Destinations
Explore Other Quizzes by Agape2012