Here are two beautiful poems for children in German by German author/poet James Kr¸ss. Here are "Der Sturm" and "Was Singt Der Wind" Do you understand them?

That was easy, I guess. This is the first verse and an introduction. He -the poet- creates the picture of someone and a girl (Marie) sitting inside the house while the wind is wildly blowing. He now starts the story of the storm.
A hurricane would be "Hurrikan", rain is "Regen" and fog is "Nebel" in German. Thankfully hurricanes are -until now- an absolute rarity in Germany.


Answer: In the desert

The storm is born in the "Morgenland" - you can translate this with orient- in the yellow desert sand. "In the field" would be "im Feld", "In Cologne" would be "in Kˆln" and "in the mountains" "im Gebirge" or "in den Bergen"

In World War II he was evacuated from the island of Heligoland to places in Thuringia, and later to Saxony.
3. "Weiter geht des Sturmes Bahn Auf den wilden Ozean, Wo die Haie schlafen. Doch vom Meere fliegt der Sturm Brausend fort zu einem Turm Irgendwo im Hafen" Our friend travels over the ocean. In this ocean there are sharks, and they are doing something. What are the doing?


Something more about James Kr¸ss:

In 1943 he started to study to be a teacher. In 1944, Kr¸ss, who turned 18 that year , was drafted into the air force. He was stationed until the end of the war in ⁄stÌ nad Labem, now in the Czech Republic.
4. "Fegt von dort ins Land hinein Durch die St‰dte, groﬂ und klein, Pustet und gewittert. Dicke Tannen sch¸ttelt er, Fensterl‰den r¸ttelt er, Daﬂ es bumst und zittert." The storm turned to a mild evening breeze now. True or false?

He is shaking firs and window shutters. That is not very mild, is it?


Even more about James Kr¸ss:
In 1946 -living in Cuxhaven with his parents- he published his first book called
"Der Goldene Faden". (The Golden Thread). He passed his exam as a teacher in 1948 but never worked as a teacher.
5. "Manchem Wand(e)rer, der bei Nacht Sich auf lange Wege macht, Saust er um die Ohren. Aber uns, Marie, mein Kind, Die in sich(e)ren Mauern sind, L‰ﬂt er ungeschoren." Asking the question my son always asks: What is "Ungeschoren" in regard of the text above?

"Ungeschoren" comes from "ungeschert" "Scheren" You may already recognize the English word shear. So directly translated it has the meaning of unshorn. But only if you are sheep, angora goat or something like this. If someone human is left "ungeschoren" he is left unharmed or scot-free.


Much much more about James Kr¸ss:

In 1948 he moved to Hamburg and published a magazine. In 1949 he again moved -this time to Munich- and met Erich K‰stner and other people of fame there.
6. "Was singt der Wind Was singt der Wind In den Telegraphendr‰hten? Muﬂ fort geschwind, Mein Kind, mein Kind, Ich darf mich nicht versp‰ten!" The wind sings to one child, how would you write two children in German?

"Ein Kind" means one child or a child.

Something more about James Kr¸ss:

After several audio dramas for children he released in 1956 the children's book "The Lighthouse on Lobster Cliffs" 1961 was the year of the book "Der wohltemperierte Leierkasten" ("the well-tempered hurdy gurdy" - but I don't think you can get it in English!). Both poems in this quiz are taken out of this book.
7. "Was singt der Wind, Was singt der Wind In den Kastanienkronen? W‰r ich nicht drauﬂ Im Feld zu Haus Mˆcht ich in Kronen wohnen!" The wind sings now in the crowns of chestnut trees. Now imagine he is in the crown of an apple tree, how do you write apple tree in German?

An apple tree is an "Apfelbaum". We have a "Kirschbaum", a cherry tree, in the garden.


Something you may like to know about James Kr¸ss:

1962 was the year of "Timm Thaler". The story of a boy who sold his laughter to the devil was shown on German TV in the year 1978 and was made into a not so good (to be polite) animation film some twenty years later.

"Tˆricht" can be best translated with foolish. Closest to that would be "Dumm" which is "dumb" in English.


Something not dumb about James Kr¸ss:

1965 he moved to Gran Canaria, a Spanish island. The last years of his life he had to fight with heart troubles.
9. "Was singt der Wind, Was singt der Wind Am Abend in den B‰umen? Schlaf ein, mein Kind, Geschwind, geschwind, Und mˆgst du friedlich tr‰umen!" The verb is "Tr‰umen". In English you dream a dream". But what is "the dream" in German"?

It is "Der Traum". You dream in your sleep (der Schlaf -the sleep). Normally at night (die Nacht-the night). Maybe the moon is shining? (der Mond-the moon).

Something sad about James Kr¸ss:

He died August 2, 1997 on Gran Canaria, Spain. He was buried at sea near Heligoland, Germany. He was born on this island.
10. Both poems are about weather conditions. Well, if you ever travel in Germany, Austria or Switzerland I wish you nice sunny weather. So what weather condition would make you very happy to hear in the weather forecast? What is sunshine?


Something at last about James Kr¸ss:

He wrote much more than the few things I mentioned. If you want some more information, take a look at Wikipedia. I used it myself. Thank you for playing the quiz. I hope I got you interested!
Source: Author Heidi66

This quiz was reviewed by FunTrivia editor TabbyTom before going online.
Any errors found in FunTrivia content are routinely corrected through our feedback system.
Most Recent Scores
Dec 12 2022 : Guest 72: 10/10
Dec 06 2022 : Guest 85: 9/10 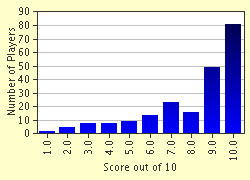 Related Quizzes
This quiz is part of series Something German from Heidi66:

I am German and that infuenced the choice of some quizzes I wrote. Enjoy!


Other Destinations
Explore Other Quizzes by Heidi66