Heine was one of the most controversial German authors of his day, and for long afterwards. This poet, journalist and essayist wrote more than more than just one popular poem about the Rhine.

Share on Facebook
Share on Twitter
Share by E-Mail
Author
Heidi66
Time
4 mins
Type
Multiple Choice
Quiz #
226,488
Updated
Dec 03 21
# Qns
10
Difficulty
Average
Avg Score
7 / 10
Plays
410
This quiz has 2 formats: you can play it as a or as shown below.
Scroll down to the bottom for the answer key.

Quiz Answer Key and Fun Facts
1. Heine's exact date of birth is not quite clear, but was most likely December 13, 1797 in the town of Düsseldorf. Which state did his birthplace belong to in 1797?

In the year 1795 Düsseldorf was occupied by France. In 1801 it was given to Bavaria for a brief period. 1806 Düsseldorf became the capital of the Grand Duchy of Berg - only be swallowed by Prussia in 1815. So, one of the answers is far-fetched.
2. Heinrich Heine is not the name he was born with. Which was his original name, dropped on baptism in 1825?

Christian Johann Heinrich Heine was originally known as Harry. Samson is the name of his father, Salomon the name of his uncle. He didn't change religion for reasons of faith but because of the restrictions on Jews at the time. He tried to keep the change secret from his family.
3. After being a unsuccessful businessmen - despite help from his uncle - and after finishing his law studies in Berlin, he decided to work as a freelance author. His first poems were published in 1821. Widely known is one from 1824 about a beautiful woman causing shipwreck on the Rhine. What's her name?

Clemens Brentano wrote a ballad about the same theme in 1801, Friedrich Silcher set Heine's poem to music in 1837. You can visit the Lorelei - a massive slate rock or cliff, where she was supposed to sit, distracting sailors, near St. Goarshausen.
4. Being outspoken and cynical in his writing, Heine soon clashed with the government censors. In 1833 Prussia and two years later the German Confederation banned all his works - past, present and future - from publication. Already in 1831 he had decided to leave Germany. Where did he choose to live?

He did visit England, Italy and Poland - you can read about this in his work "Reisebilder" but he went to live in Paris. He only visited Germany twice later on.
5. Without being a Communist himself, Heine was on friendly terms with the founders of Communism, including Marx and Engels. One of his poems, published in 1844, was translated into English by Engels himself. What is the title of this poem?

The poem was inspired by an uprising of weavers in Silesia in 1844. It was printed and distributed by Communists. It was soon banned.
6. In 1841 Heinrich Heine married his "good fat child", named by him Mathilde. When he met her in 1834 she was a shop-assistant. What was her real name?

Jeanne Antoinette Poisson: Madame Pompadour; Marie-Jeanne Bécu: Madame Dubarry and Agnčs Sorel were all mistresses of French kings.
7. In 1843 Heine published an epic poem, based on his travels to Germany the year before. The "viciously spiteful and outragous attack on Prussia and our distinguished monarch" - as the censor described it - is now a classic of German literature and is widely cited for the lines "If I think of Germany in the night/Then I can no longer sleep". What's the name?

Romanzero and Atta Trollwere released in later years. It's interesting that today the lines "If I think of Germany in the night ..." are mostly interpreted politically, but in reality he was thinking of not seeing his mother again.
8. In the year 1848 Heine suffered a physical breakdown. He himself thought that he had contracted syphillis earlier in his life, experts today think that it was more likely amyothrophic lateral sclerosis or multiple sclerosis. For how long did he suffer from this illness till he died?

Heine died on 17 February 1856. He was buried in Montmartre Cemetery. You can still visit his grave.
9. The 'Lorelei' was forbidden in Germany between 1933-1945 because of its Jewish author.

It was too popular. They did write "author unknown" when it was published, and all his other works were banned. His books were publicly burnt in 1933. Heine himself had written in "Almansor" (1821) "Where they burn books, they will, in the end, burn human beings too".
10. It took some time until Düsseldorf decided to be proud of its greatest son. The named a street after him and, in 1988, an important institution. Which one?


Answer: The university (and hospital)

The university was founded in 1965 and changed its name in 1988 after a long and sometimes heated discussion. Some wheels grind very slowly ...
Source: Author Heidi66

This quiz was reviewed by FunTrivia editor bloomsby before going online.
Any errors found in FunTrivia content are routinely corrected through our feedback system.
Most Recent Scores
Feb 03 2023 : griller: 7/10
Feb 01 2023 : john62450: 6/10 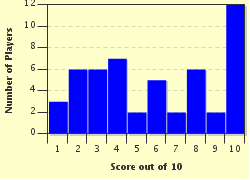 Related Quizzes
This quiz is part of series Look, literature!:

Read, read all about it! Or play the quizzes, it takes less time.


Other Destinations
Explore Other Quizzes by Heidi66