The Bible is filled with people who, for various reasons, are either exiled or forced to run away. This quiz takes you traveling to meet some of those people. All questions are made using the Danish 1992 edition together with the NIV.

Quiz Answer Key and Fun Facts
1. You find yourself in a barren land. Suddenly you see a young man. When you approach him, you hear him mumble something about "being his brother's keeper". You also notice that he has a strange mark on his forehead. What is the mark for, and how did he get it?


Answer: Protection; God gave it to him

Cain killed his brother Abel and was banished by God to the land of Nod. However, God gave Cain a mark for protection in Genesis 4:15.
2. Finding yourself in a desert you see a woman, who is clearly pregnant, kneeling down by a spring. When you ask her what she is doing in the middle of a desert in her condition, she tells you that she was running away from her mistress. However she also tells you that an angel told her to return, and revealed the meaning of the name she is to give her child. What is the meaning of the name?

Hagar ran into the desert due to being mistreated by her mistress Sarai. In the desert she met an angel who told her to return and told her that her son's name would be Ishmael. See Genesis 16:11.
3. Next you meet a man who looks as if he has just woken up. He tells you that he had to flee from his brother, who wants to kill him. Then he proceeds to tell you about a dream he'd had the same night. Can you imagine what the dream was about?


Answer: A stairway going up to Heaven with angels going up and down

Jacob, the younger son of Isaac, had to flee from his brother Esau's anger because he tricked his inheritance away from him. On the way he dreamt about the Stairway to Heaven. During the dream God re-confirmed the promise to Abraham and Isaac that their descendants would become a great nation, but Jacob didn't actually see this in his dream. See Genesis 28:12-15.
4. Suddenly you feel yourself moving again. When you stop you are in the middle of a vast desert. In the distance you can see a great river and from that direction you see a man running towards you. He explains that he had to flee because he killed someone. Who did he kill?

Moses killed an Egyptian taskmaster when he saw a Hebrew slave being beaten to death. Hiding the Egyptian's body in the sand, he thought the deed had gone unnoticed, but upon learning that he had been discovered he fled into the desert. See Exodus 2:12.
5. You've moved again! You see a man escaping from a house, climbing out through the window while someone makes a dummy in his bed. He tells you that he was helped to escape by a person related to someone who wanted to kill him. How was the person who helped him escape related to the person who wanted to kill him?

Saul was jealous of David and wanted to kill him. However, Saul's daughter Michal, who was also David's wife, warned David and helped him escape. She then took an idol and dressed it up as David. See 1 Samuel 19:11-13.
6. You find yourself in a large valley outside a major city. The landscape seems to be crying for a large group of people leaving the city. Catching some of their conversation, you find out that they are fleeing from the son of the man who appears to be leading them. You also see him send some men, carrying a large object, back to the city. What is the name of this strange valley where the landscape itself cries?

David, who had at this point been king for several years, had to flee for his life when his son Absalom rebelled. Upon leaving, David and his followers crossed Kidron Valley outside Jerusalem. See 2 Samuel 15:23.
7. Moving again you almost bump into a man who is clearly in a hurry to get away. He quickly explains that he is a prophet who had to run away from a wicked queen who wanted to kill him, and that she had already killed multiple other prophets. What is the name of the queen?

Jezebel, the wife of King Ahab, was an avid Baal follower who hated the prophet Elijah. After Elijah had beaten the Baal priests in the famous challenge on Carmel Jezebel threatened to kill Elijah, who fled for his life. See 1 Kings 19:1-3.
8. Finding yourself once again in the desert, you stumble upon a family consisting of a couple and their infant son. The man quickly explains that they had to flee because the king in the country they had fled from wanted to kill the boy. Why would a king want to kill an innocent child?


Answer: He feared the boy would eventually overthrow his kingdom

King Herod didn't exactly like the news that a new king -- Jesus -- had been born. Fearing for his kingdom he sought to kill the baby Jesus. However Joseph was warned in a dream to flee to Egypt with Mary and Jesus until it was safe to return. See Matthew 2:13-15.
9. You find yourself outside a major city with a wall going around it. All of a sudden you see something strange: a basket being lowered down from an opening in the wall. When it reaches the ground a lid opens and a man gets out. Why does the man leave the city in this peculiar manner?


Answer: Some Jews wanted to kill him

After Saul (later Paul) had been converted on the way to Damascus he stayed for a while in the city, preaching that Jesus in the son of God. As one might imagine many of the Jews didn't like this change in character and sought to kill him. Luckily Saul had already gained friends in Damascus who helped him escape. See Acts 9:20-25.
10. Moving again you find yourself on an island. Venturing into a cave you meet an elderly man with a look of amazement on his face. He tells you about a great vision he just had in which he saw the end of the world. Not wanting to fill your head with such matters you ask him the name of the island. What is the name of the island then?

John was exiled to Patmos, presumably for preaching the Gospel. While there he wrote what would later become the last book in the Christian Bible: Revelation. See Revelation 1:9.
Source: Author RedheadDane 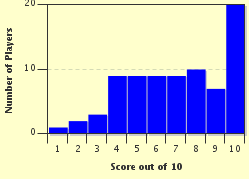 Related Quizzes
1. Handmaidens, Servants and Slaves in the Bible Average
2. The Devil Made Them Do It? Average
3. Children of the Bible Average
4. Brave or Maybe Not so Much Average
5. A Quick Look at Ten Women in Acts & Paul's Letters Average
6. Bible People In the Same Book -- #3 Average
7. Hey, I Did That Too! Average
8. Witches, Wizards, and Sorcerers of the Bible Tough
9. But They Seemed Like Such Nice People! Average
10. The Kindness of a Stranger Easier
11. Children in the Old & New Testaments -- #3 Average
12. What Child Is This? Average


Other Destinations
Explore Other Quizzes by RedheadDane