This quiz examines ten women mentioned in the Book of Acts as well as the thirteen letters written by Paul. Your assignment is to match the ten statements with the ten women. (The NKJV and the NIV were used for this quiz.)

Quiz Answer Key and Fun Facts
1. Find the match for the woman whose household made Paul aware of divisions in the church at Corinth. (1 Corinthians 1:11)

Chloe is the correct answer. However, little is known about her as she is mentioned in passing reference. In 1 Corinthians 1:11, Paul, in the NIV, writes: "My brothers and sisters, some from Chloe's household have informed me that there are quarrels among you." Paul then goes on to exhort the believers at Corinth to end their bickering.

There is no mention of the identity of the person in Chloe's household who made Paul aware of divisions in the church.
2. Find the match for the woman who was a tentmaker, just like her husband. (Acts 18:1-3)

Priscilla, according to Scripture, was a tentmaker, similar to her husband Aquila. Their occupation was shared by Paul, the apostle to the Gentiles.

Acts 18:1-3, in the NKJV, states: "After these things Paul departed from Athens and went to Corinth. And he found a certain Jew named Aquila, born in Pontus, who had recently come from Italy with his wife Priscilla (because Claudius had commanded all the Jews to depart from Rome); and he came to them. So, because he was of the same trade, he stayed with them and worked; for by occupation they were tentmakers. And he reasoned in the synagogue every Sabbath, and persuaded both Jews and Greeks."

In Romans 16:3, Paul states Priscilla and Aquila risked "their own necks for my life." No details are given, however, as to what the husband-wife team did to win such praise from Paul.
3. Find the match for the woman who lived at Philippi and was baptized by Paul along with her entire household. (Acts 16:11-15)

Lydia was converted to Christianity by Paul and, according to Scripture, her entire household was baptized. Scripture states Lydia was a dealer in purple cloth at Philippi. Going strictly by Scripture, she was the first Christian convert in Europe.

Lydia's step of faith was followed in the same chapter by the conversion of the Philippian jailer and his household. Incidentally, many theologians believe Lydia was a dynamic and wealthy woman. Purple cloth was an item that only the very wealthy could afford in Biblical times.

Notes in the NKJV Study Bible explain things this way: "Purple dye had to be gathered drop by drop from a certain shellfish. Because it was so expensive purple dye was used on garments worn by royalty. As an artisan in purple dyes, Lydia was a wealthy woman who came to Philippi to practice her trade."
4. Find the match for the woman with whom Euodia was at loggerheads. (Philippians 4:2)

Euodia and Syntyche it seems were like cats and dogs. Although they both lived in Philippi and were members of the early church, they didn't get along. However, little light is shed on the situation. In Philippians 4:2-3, in the NKJV Bible, Paul writes: "I implore Euodia and I implore Syntyche to be of the same mind in the Lord. And I urge you also, true companion, help these women who labored with me in the gospel, with Clement also, and the rest of my fellow workers, whose names are in the Book of Life."

Philippi is the same community in which Paul converted Lydia and her family, as well as the jailer and his family, to Christianity. Details of their conversion are found in Acts 16:11-40.
5. Find the match for the woman who was always doing good and helping the poor. (Acts 9:36-42)

Dorcas, also known as Tabitha, is the correct answer. According to Acts 9:36-42, she was raised from the dead by Peter, one of the original Twelve Disciples. Scripture states Dorcas was "always doing good and helping the poor." In different places in the Bible, helping the poor is pointed out as a strong virtue. In Acts 10:2, for example, Cornelius, a Roman centurion who was also a Christian believer, is described as "giving generously" to those in need.

Dorcas lived in Joppa. The community is now known as Jaffa and is part of Tel Aviv, on the Mediterranean Sea. According to Scripture, after Peter raised the woman from the dead the miracle became known all over Joppa, and many people believed in the Lord. The story of Dorcas being raised from the dead is only one of several incidents in which Peter performed miracles in Acts.

For example, in Acts 9:32-25, just before the report about Dorcas, Scripture tells of Peter healing Aeneas, a paralytic who had been bedridden for eight years.
6. Find the match for the woman who is BELIEVED to have been Philemon's wife. (Philemon 1:1)

There is no conclusive proof, but many theologians believe Apphia was the wife of Philemon, master of the run-away slave Onesimus. In the salutations of his letter to Philemon, Paul writes, "to Philemon our beloved friend and fellow laborer, to the beloved Apphia, Archippus our fellow soldier, and to the church in your house." As a result, it is believed Apphia was Philemon's wife and Archippus was their son.

Paul's letter to Philemon is an appeal to Philemon to accept Onesimus back as an equal. According to the letter, after Onesimus ran away on Philemon, he met up with Paul in Rome and ended up being converted to Christianity.
7. Find the match for the Jewish woman who was married to Felix. (Acts 24:24)

Drusilla was married to Felix, the Roman governor who Paul appeared before on charges of sedition. She is mentioned only once in the Bible -- Acts 24:24. But there is considerable information about her at various websites, including Wikipedia.

The website Christiananswers.net, for example, reports she was the third and youngest daughter of Herod Agrippa I. The website goes on to report: "Felix, the Roman procurator of Judea, induced her to leave her husband, Azizus, the king of Emesa, and become his wife. She was present with Felix when Paul reasoned of 'righteousness, temperance, and judgment to come' (Acts 24:24). She and her son perished in the eruption of Mount Vesuvius, A.D. 79."

According to the website Biblical-Baby-Names.com, Drusilla means 'watered by the dew.'
8. Find the match for the woman who was struck dead after withholding money from the early church. (Acts 5:1-11)

Sapphira and her husband Ananias were struck dead after selling their property and withholding part of the money from going to the Lord's work, as per Acts 5:1-11. According to Scripture, they were struck dead after they met separately with Peter and both claimed they had turned over the entire proceeds from the sale of their property.
9. Find the match for the woman who was the mother of Timothy. (2 Timothy 1:5)

Eunice is the correct answer. However, not much is known about her as she is mentioned in passing reference. 2 Timothy 1:5 states her mother was Lois. According to Acts 16:1, Eunice lived in Lystra and, while she was Jewish, her husband was Greek.
10. Find the match for the servant girl who served at the house of Mary, the mother of John Mark. (Acts 12:13)

Rhoda will be always remembered as the highly excitable girl who let her mind wander from the task at hand. According to Scripture, she went to answer the door after Peter's miraculous escape from prison and got so excited when she heard Peter's voice that she went to tell the other occupants he was at the door and left him knocking. It's a good thing Peter was not being chased by would-be captors, as he would have been an easy capture. It must have been exasperating for Peter. He had miraculously escaped from prison but had difficulty entering Mary's house because, while he was pounding on the door trying to get in, Rhoda was busy telling everyone else the latest news. The comical account is found in Acts 12:12-16.

According to Verse 12, the incident took place at the home of Mary, the mother of John Mark.
Source: Author Cowrofl 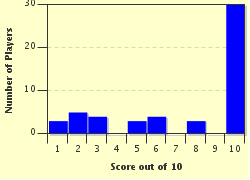 Related Quizzes
1. Handmaidens, Servants and Slaves in the Bible Average
2. The Devil Made Them Do It? Average
3. Children of the Bible Average
4. Brave or Maybe Not so Much Average
5. Bible People In the Same Book -- #3 Average
6. Hey, I Did That Too! Average
7. Witches, Wizards, and Sorcerers of the Bible Tough
8. But They Seemed Like Such Nice People! Average
9. The Kindness of a Stranger Easier
10. Children in the Old & New Testaments -- #3 Average
11. What Child Is This? Average
12. You Can Be One Too Average