Hey, I Did That Too! Trivia Quiz

Several people in the Bible have done the same thing as someone else. Not to be left out, match the other person with the action done. The King James Version (KJV) of the Bible was used for all scriptures.

Quiz Answer Key and Fun Facts
1. Benaiah wasn't the only man to kill a lion in the Bible. What was the name of the man who killed a lion in Judges 14?

Samson was considered the strongest man in the Bible. Judges 14:5-6 of the KJV Bible refers to Samson killing a lion with his bare hands while he was with his parents at the vineyard in Timnah.
2. Ahab's blood was licked up by the dogs after he was killed in battle. What was the name of Ahab's wife whose blood was also licked up by dogs in II Kings 9?

II Kings 9:10 of the KJV Bible has Jezebel and her family being slaughtered by Jehu and his followers. Jezebel's body was left unburied and eaten by dogs.
3. Jesus wasn't the only person to walk on water. Who followed Jesus in walking on water in Matthew 14?

In Matthew 14:29 of the KJV Bible, the disciples saw a man walking on water toward them. They were afraid until Jesus called out to them. Peter was still doubtful. He asked Jesus to call for him to walk on the water if it was really their Savior standing before them. Jesus told Peter to come to Him. Peter stepped out of the boat and walked on water to get to Jesus.
4. Eutychus fell from a window while listening to Paul preach in Acts 20. Ahaziah fell from a window in his room in Samaria in 2 Kings 1. Did both of these men die from their injuries?

Eutychus fell from a window while listening to Paul preach. He died from the fall in Acts 20:9 of the KJV Bible, but Paul raised him from the dead. Ahaziah fell from the window in his bedroom. He didn't die from his injuries right away, but soon after in 2 Kings 1:2 of the KJV Bible.
5. Who else besides Moses appeared to Jesus, Peter, James, and John during the transfiguration of Jesus in Mark 9?

After Peter saw Elijah and Moses, he wanted to build a tabernacle for each one of them, but they disappeared before anything could be done. As they walked down the mountain, Jesus told Peter, James and John not to breathe a word of who they saw until He had risen from the grave.
6. The first two men that Jesus picked as his disciples were Peter and ______.

Matthew 4:18-19 of the KJV Bible mentions the first two men that Jesus made as His disciples. Simon Peter and Andrew were fisherman. They were getting ready to go fishing when Jesus called for them to follow Him. Immediately, they did.
7. Besides Mary, who was also the sister of Lazarus, according to John 11?

John 11:1-2 of the KJV Bible lists Mary and Martha as the sisters of Lazarus, the brother who was raised from the dead by their friend Jesus.
8. According to Luke 23, Herod became good friends with this man at the trial of Jesus?

Luke 23:12 of the KJV Bible references Herod and Pilate's friendship as they both witnessed the trial of Jesus. Before the trial they were enemies.
9. David wasn't the only man that was let down over a wall in a basket. Who left Damascus in a basket to escape death in Acts 9?

Saul had changed his name to Paul upon hearing God's voice and becoming blind in Acts 9:20-26. While in Damascus, he preached the gospel and was condemned to death by the Jews. The disciples helped Paul escape by lowering him down a wall in a basket. After leaving Damascus, Paul went to Jerusalem.
10. Who accompanied Joshua to look for the Promised Land in Numbers 14?

God made Joshua and Caleb live because they gave a good report when they checked on the Promised Land in Numbers 14:38 of the KJV Bible. The men that gave an opposing view of the Promised Land died of a plague.
Source: Author pennie1478 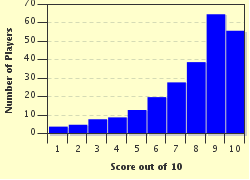