One of my favorite chemistry professors called carbon incestuous and promiscuous because it combines with itself and everything else. How much do you know about this element?

Quiz Answer Key and Fun Facts
1. There are four allotropes of carbon. One is famous for its hardness. In this form of carbon, each carbon bonds with four others. What is this allotrope commonly known as?

When an animal or plant is alive its respiration keeps the ratio of C-14 and C-12 constant. After it dies, the carbon-14 decays to carbon-12 and the ratio changes at a known rate, which allows the determination of the date that the animal or plant died. The half-life of carbon is about 5700 years.
3. Thin "whiskers" of carbon are imbedded in an epoxy to produce a light-weight material used in sporting equipment and in aerospace applications. What is the term for this combination of materials?

Carbon fiber composites are used to make guitars, kayaks, and bicycle frames. It is expensive, but worth it for many because of its superior strength, corrosion resistance, and light weight.
4. The name carbon comes from the Latin word carbo. What does carbo mean?

Carbon is one of the elements discovered in ancient times. Its chemical symbol is C.
5. Another allotrope of carbon has a structure composed of sheets of covalently-bonded carbon, held together with weaker bonds. What is this very common form of carbon called?

Graphite is 100% carbon, as is diamond. The bonding between the small carbon atoms makes a huge difference in the properties of the materials, due to the overlap of electronic orbitals in the case of graphite. Until recently, diamond, graphite, and amorphous carbon (soot and charcoal) were the only known allotropes of carbon.
6. There is more than one oxidation state for carbon. Which is not a possible one of them?

Carbon forms a wide variety of compounds. It forms hybrid structures, mainly with hydrogen. Because carbon can form four bonds,the ultrahard substance diamond is possible. Although silicon also forms four bonds in a diamond type structure, it is brittle because of the relative size of the silicon atom compared with the carbon atom.
7. How abundant, by mass, is carbon in the universe?

Hydrogen is the most abundant element in the universe, followed by helium and oxygen with carbon fourth. Einstein weighs in on stupidity claiming "Only two things are infinite, the universe and human stupidity, and I'm not sure about the former." Other abundant elements are iron and silicon.
8. What is the branch of chemistry that is concerned with the combination of carbon with hydrogen, oxygen, and nitrogen?

Soot is not crystalline and therefore is classed as without form or amorphous. It results from combustion of hydrocarbons.
10. A fourth allotrope of carbon was discovered in 1985 following work done at the University of Sussex and at Rice University. This form of pure carbon was first found as hollow balls. What are these tiny balls called because of their resemblance to a geodesic dome?

To date, most of these structures which now include nanotubes and elipsoids are laboratory curiosities, although there are huge number of proposed uses, for example, nanowires or ionic cages.
Source: Author drbabe 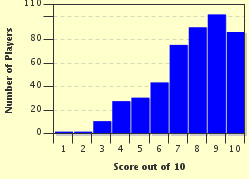 
Other Destinations
Explore Other Quizzes by drbabe