This time we take a trip around the world visiting the burial sites of notable persons. Perhaps the photographic clues will help too.

Quiz Answer Key and Fun Facts
1. We begin with a visit to New York NY, and the largest mausoleum in the U.S.A. (pictured). Which president is buried here?

Located in Riverside Park in the Morningside Heights neighborhood of Upper Manhattan in New York City, the "General Grant National Memorial" contains the remains of the 18th President, Ulysses S. Grant (1822-1885) and his wife, Julia Dent Grant (1826-1902). Completed more than a decade after his death, in 1897, the management of Grant's Tomb was taken over by the National Park Service in 1958. Born Hiram Ulysses Grant in Point Pleasant, Ohio, Grant was the commander of the victorious Union Army during the latter half of the American Civil War (1861-65).

He was elected President in 1868 and served two terms from March 1869 until March 1877.
2. Our next stop is the burial site (pictured) of which great 19th-Century writer? He died aged just 37 as a result of injuries sustained in a duel.

Born Alexander Sergeyevich Pushkin in Moscow in 1799, he is widely considered the greatest Russian poet of the Romantic era and the founder of modern Russian literature. Pushkin fought a remarkable 29 duels during his relatively short life, so it is, perhaps, hardly surprising that one eventually led to his death.

His opponent on the fatal occasion was the brother in-law and the alleged lover of Pushkin's wife, Natalya, a French officer named Georges d'Anthčs. Shot through the spleen, Pushkin died two days later of his injuries. Although he died in Saint Petersburg, Pushkin's body was returned to his mother's estate for burial.
3. The tomb (pictured) of which 10th-Century Saint can be visited in Saint Vitus Cathedral in Prague, Czech Republic?

Wenceslas was born in Prague sometime around 907. He became Wenceslas I, Duke of Bohemia in 921 and ruled for fourteen years, until his assassination, allegedly in a plot planned by his brother, Boleslav the Cruel, in 935. He was subsequently elevated to sainthood, posthumously declared king, and adopted as the patron saint of the Czech people.

He is immortalized today by the song, "Good King Wenceslas", which was written more than nine centuries after his death, in 1853. His tomb and altar are located in the Saint Wenceslas Chapel in the church commonly known as Saint Vitus Cathedral, which is located entirely within Prague Castle, overlooking the city.

The full official title of the cathedral, though, is "The St. Vitus, St. Wenceslas and St. Adalbert Cathedral".
4. Which 12th-Century King of England, the fourth son of William the Conqueror, is buried in the rather innocuous grave at Reading Abbey, pictured here?

Born Henry Beauclerc in 1086, probably in Selby, Yorkshire, he became King Henry I on the death of his brother, William II, in 1100. Although Henry and his wife, Matilda of Scotland, produced two legitimate children, but their son died in a shipping disaster leaving him with no male heir. (He did have nine illegitimate sons and 15 daughters, but none were considered suitable successors.) Henry died in Saint-Denis-en-Lyons, France in 1135 in his mid-60s and was succeeded as King of England by his nephew, Stephen of Blois. Henry was buried at Reading Abbey, which he had founded in 1121.

His first wife, Matilda of Scotland, is also buried there. Located in the center of the modern-day city of Reading in Berkshire, only a few ruins survive.
5. The grave (pictured) of which London-born 20th-Century British Prime Minister can be visited in the West Sussex village of Horsted Keynes?

Born Maurice Harold Macmillan in Chelsea, London in 1894 and a graduate of Balliol College, Oxford, "Supermac" became Prime Minister in January 1957. He had previously served as Defense Minister (under Churchill) and both Foreign Secretary and Chancellor in Sir Anthony Eden's government. PM for nearly seven years, Macmillan was succeeded by Sir Alec Douglas-Home in October 1963. He was both the last British PM born during the reign of Queen Victoria and the last to have served in World War I.
Elevated to the House of Lords as the Earl of Stockton in 1984, Macmillan died in just after Christmas in 1986 at the family estate in East Sussex. His 92 years and 322 days was the greatest age attained by a British Prime Minister at the time. (James Callaghan surpassed this record on 14 February 2005.)
Macmillan is buried in the family plot in the churchyard of the 11th-Century St. Giles Church in Horsted Keynes. Curiously, the grave of the former Prime Minister is the smallest -- on the right in the photograph.
6. One of the major composers of the 20th Century, his death in 1953 went virtually unnoticed because a major world leader died on the same day. Who is this composer and pianist who is buried in the pictured grave?

Born Sergei Sergeyevich Prokofiev in Sontsovka (now Krasne in eastern Ukraine) in 1891, his works include five piano concertos, nine piano sonatas, seven symphonies and ballets such as "Romeo and Juliet", "Cinderella" and "Peter and the Wolf".
His death on March 5, 1953 went unreported as the newspapers were filled with the death of Joseph Stalin on the same day. Indeed, the crowds were so large that it was three days before Prokofiev's body could even be removed from his apartment near Red Square. He is buried in Novodevichy Cemetery in Moscow.
7. Born in 1776, which great English Romantic painter is buried in the pictured tomb in the churchyard of St John-at-Hampstead in London, near where he died at the age of 60?

He was born in the Suffolk village of East Bergholt in 1776, and because of his landscape paintings that area is now widely known as "Constable Country". His best-known work is probably the 1821 painting, "The Hay Wain". Other highlights include "Dedham Vale" from 1802, "The Cornfield" from 1826 and "Salisbury Cathedral from the Bishop's Grounds" painted around 1825.
8. The pictured grave is one of the most famous in the Cimetičre du Pčre-Lachaise in Paris. Over the years it has been defaced with graffiti and had busts stolen by vandals. Who lies here?

Born James Douglas Morrison in Melbourne FL in 1943, Jim Morrison gained fame as the lead singer of Californian rock band The Doors. His wild performances marked him as one of the most iconic frontmen in rock history and a poll by 'Classic Rock Magazine' named him #22 in a list of the "50 Greatest Singers in Rock".
Alcohol abuse was a problem for Morrison and almost certainly led to his death in Paris at the age of just 27, although he is alleged to have died of a heroin overdose although no autopsy was ever done.
His tomb at Pčre-Lachaise is one of the most visited tourist attractions in Paris.
9. Some spectacular mausolea can be found around the world. Who is honored by this picturesque Asian mausoleum?

Born with the name Temujin in the Khentii Mountains of Mongolia, probably in 1162, he was the founder and 'Great Khan' of the Mongol Empire. He began by uniting the nomadic tribes of northeastern Asia and by 1206 he was proclaimed the "Genghis Khan". By the time of his death in 1227, the Mongol Empire encompassed the whole of China and most of central Asia.
The Mausoleum of Genghis Khan was built between 1954 and 1956 in Kandehuo Enclosure in Inner Mongolia. Genghis Khan worship is a popular religion amongst Mongolians and the cenotaph here contains a coffin, but no body (his actual tomb and his body have never been found).
The mausoleum is guarded by "the privileged ones". Worshipers gather four times annually to offer flowers and food to 'The Heaven'. Wrestling, horse-riding, singing and archery contests follow the ceremonies.
10. The city of Agra in the northern Indian state of Uttar Pradesh is best known as the site of the Taj Mahal. The city is also the location of another significant burial site, though. Who lies within the pictured tomb?

Born Abu'l-Fath Jalal ud-din Muhammad Akbar in 1542 in Umerkot, Sindh province (now in Pakistan), Akbar I became the Mughal Emperor upon the death of his father, Humayun, in 1556 (at the age of just 14). By the time of his death, almost 50 years later in 1605, the Mughal Empire had expanded to encompass almost the whole of northern India and Akbar himself was revered with near-divine status.
Planning for the Tomb of Akbar the Great began around 1600. It was built in Sikandra, a suburb of Agra, during the decade immediately following Akbar's death (1605-1613).
Source: Author EnglishJedi 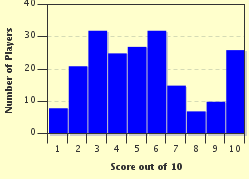