A Horse of a Different Colour Trivia Quiz

A quiz on all sorts of horse colours, from the common to the rare.

Quiz Answer Key and Fun Facts
1. What colour is a horse with a brown body, ranging from light brown to a dark mahogany, with black points (mane, tail, lower legs)?

This colour pattern is one of the most commonly seen horse coats. Bays can be light brown, like very milky coffee, or darker, like chocolate. They can also have a reddish brown coat, and these are known as blood bays.
2. A golden horse who has black points, but no dorsal stripe or primitive markings is called a?

Buckskins are golden horses with black manes, tails and legs. Unlike duns, they do not have primitive markings such as dorsal stripes or zebra striping on the legs.
3. A chestnut horse with white hairs mixed into its coat is known as?

Roan horses are horses with white hairs flecked into their main coat colour. Red roans, or chestnut roans, sometimes look almost pink from the combination of red and white.
4. One of the rarest types of paints, which of these horses is mostly white, with colour on its ears and polls?

Medicine hat paints are a variation of paints where the body is almost all white except for the top of the head. They can have colour on the chest, known as a shield, and occasionally around the eyes as well. War bonnets are pure white except for the head. Medicine hats were considered sacred by the Plains Indians.
5. My horse is nearly entirely white or very grey, with very tiny flecks of a darker colour. What is this called?

Grey horses are generally born a darker base colour, and lighten with age. Their coats often follow a pattern of different phases, and one of these is fleabitten, where tiny groups of few darker hairs create a speckled look.
6. One of the rarest patterns in horses, but fairly common in dogs, is black or white stripes running vertically down a horse's body. What is this called?

Brindle horses are very rare. They have thin black stripes over a normal base coat. You can see this often in dogs, especially breeds like pit bulls and boxers.
7. How would you describe a palomino horse?

Palominos are some of the most gorgeous and recognizable horse colours. Even many non-horse people could tell you that Roy Roger's famous horse, Trigger, was a palomino.
8. If I had a piebald horse, what colour would he be?

Paints are sometimes described as "piebald" or "skewbald". Piebalds are black and white, while skewbalds are any colour other than black and white. Fun fact: bald is an old word for white; this is why bald eagles are called bald, even when their heads are covered!
9. What would you call a horse that is a mouse-like grey, with black points and primitive markings (such as a dorsal stripe)?

Grulla (pronounced grew-ya) horse are a type of dun horse, but instead of having a yellow body colour, they have a grey one. They have other features common in duns, such as a dorsal stripe, and zebra striping on the legs and withers.
10. A pure black horse is just called "black".

No fancy name here! If a horse is pure black, then he's called black! Some black horses' colour may fade, even looking like a bay, but if their genetic makeup is that of a black horse, they are still considered black.
Source: Author KerBlang 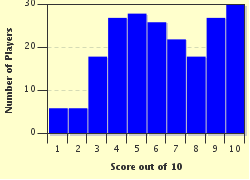 
Other Destinations
Explore Other Quizzes by KerBlang