This is a quiz about Horse Coat Colors and Horse Color Genetics. Questions are based on material from 'The Horse, 2nd Edition" by Evans, Borton, et al, the Horse Industry Handbook, and certain other sources on genetics.

Quiz Answer Key and Fun Facts
1. On a perlino horse, what color are the points?

Perlinos have rust colored points. The black is diluted to a rust color instead of a cream color.
2. What is the term for the genetic makeup of a horse?

The genotype is the genetic makeup (which genes a horse has, and in which forms) and controls the phenotype.
3. Which locus controls the gene for roan coloring?

The gene for roan is located on the R locus. T is tobiano spotting, E is for base coat color, and G is grey.
4. How many pairs of chromosomes do horses have?

The E's cause the horse to have a black base, while the A's restrict the black hair to the points.
6. If a horse has the genotype RnRn, it is:

A horse that is RnRn is homozygous for the roan gene, and it will probably die in utero since roan is frequently lethal in its homozygous dominant form. It also had to come from two roan parents, which would be a very risky pairing that most breeders probably would never attempt.
7. If a horse has the genotype Zz, it is what color?

The genes on the Z locus determine whether or not a horse is silver dapple. This gene is rare in most breeds, but very common in Shetlands, Minis, and Icelandic ponies.
8. Roan, Dominant White, and Grey are called what:

They totally or partially mask the presence of other coat colors.
9. Lethal white syndrome causes a foal to be born without a functional ___?

The foal will often be carried to full term and appear normal, although mainly white and with blue eyes. The foal cannot survive and will be euthanized as soon as the condition is identified. Both parents need to be carriers of the mutated gene for the foal to inherit the fault, and DNA testing can prevent this happening.
10. A double dilution of the creme gene can result in what two colors?

These two colors are both recognized by the American White Horse association.
Source: Author kspirit 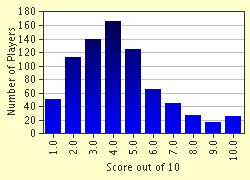 Related Quizzes
1. A Horse of Many Colors Easier
2. Strange and Unusual Horse Colors and Markings Tough
3. Horse Markings Average
4. Horse Colors for the American Horseman Average
5. More Horse Colors for the American Horseman Average
6. A Horse of a Different Colour Average
7. Equine Colors 101 Difficult
8. Just Horsin' Around - BACK TO BASICS Easier
9. Horsing Around! Average
10. Horsing Around 2 Average
11. Horse Lingo For Fun! Average
12. All About Horses Tough


Other Destinations
Explore Other Quizzes by kspirit