This is a quiz about some of the different colors that horses can come in.

Share on Facebook
Share on Twitter
Share by E-Mail
Author
morrigan
Time
4 mins
Type
Multiple Choice
Quiz #
157,058
Updated
Jan 21 23
# Qns
10
Difficulty
Average
Avg Score
7 / 10
Plays
8618
This quiz has 2 formats: you can play it as a or as shown below.
Scroll down to the bottom for the answer key.

Quiz Answer Key and Fun Facts
1. What body color is brown ranging from tan to red to almost black, with a black mane and tail?

A bay horse has all black points, which are the mane/tail, the legs, the ears and the muzzle.
2. What color of horse has a cream-colored coat with pink skin and blue eyes?

A cremello is a type of chestnut, just like the Palomino. The cremello has a white mane/tail, while the other like color, the perlino, has an orangish and darker mane/tail.
3. What is this color: a yellowish body, always with a dorsal stripe, sometimes with primitive markings?

A dun that has a black mane/tail often gets mixed up with the buckskin, but the difference is that the dun has a dorsal stripe while the buckskin does not. A dun can also have zebra stripes on its legs, much like the grullo. They can come in many different shades, including a red dun, a bay dun and a "regular" dun, in which the legs are a darker color than the body of the horse.
4. What is this color: a mouse-gray or smokey color that usually has a dorsal stripe. It can also have other primitive markings, including shoulder stripes and zebra stripes.

It's one of the more unusual shades of horses. The grullo (sometimes spelled grulla) horse may also have shoulder stripes and zebra stripes on the legs. Some other primitive markings that the grullo may have are a face mask, cobwebbing or mottling.

For future reference: both "grullo" & "grulla" spellings are correct.

In the AQHA registrary, only 1040 out of 143373 horses were registered as a grullo in 2001. http://www.aqha.com/association/registration/rulebook/registration.pdf
5. What color is born a solid color but gets lighter with age?

There are several varieties of gray, including fleabitten, dappled, light, steel and rose gray. A rose gray is an unusual color in which the medium-gray hair is tinted with red.

One breed of horse that almost always turns gray with age is the Lipizzan.
6. What color is a yellow with a black mane/tail, with black on the legs?

The difference between a dun and a buckskin is that the buckskin doesn't have a dorsal stripe. Buckskins do not have any primitive markings that the dun and grullo have.

The dun & the buckskin are genetically different colors-not just surface colors!
7. What color horse usually has an even amount of red and white mixed through their coat?

The roan color also comes in blue roan and strawberry roan. The blue roan is with black and white instead of red and white, while the strawberry roan is with a chestnut coloring and white. Aside from those three colors, the roan can come in almost any horse color, including buckskin and palomino.
8. What breed of horse is a color variation and a breed?

The spotted coat is mostly known through the Appaloosa, but it is also seen on several other breeds, including the Knapstrub, Pony of America, Palouse pony, and Noriker (also known as the Noric and Pinzgauer.)

There are several different variations of the spotted color, including leopard which is large dark spots over the entire white body. Snowflake is white spots over a dark coat, a blanket is a white blanket with dark spots on it with the body of a horse being a solid color. Marble is small dark marks over a coat of any color. Frost is just the opposite; small white marks over a dark base color.
9. What color has a golden body with a cream or white mane and tail?

Like the Appaloosa, the Palomino is a color variation as well as a breed. A Palomino can be many shades of gold, from a light, almost white shade, to a deep gold.
10. What color is (recessive) hidden in its heterozygous form, but when combined with cream, lookes like a double dilute (cremello, perlino or smokey cream)?

Pearl is found in several Spanish-based breeds, including Andalusians and Lusitanos. It's also found in Gypsy horses, the American Paint Horse and Peruvian Pasos. When in its homozygous form, it dilutes the coat once (like a palomino or buckskin, but is recessive (hidden) in its heterozygous form unless combined with cream. http://gowerphotos.tripod.com/chalani/hgenetics.htm and http://www.horsenetwork.com/reference/horsecolors.html http://www.equusite.com/articles/basics/basicsColors.shtml http://www.horsedirectory.com.au/horseresources/general/ColoursMarkings.html
Source: Author morrigan

This quiz was reviewed by FunTrivia editor crisw before going online.
Any errors found in FunTrivia content are routinely corrected through our feedback system.
Most Recent Scores
Dec 23 2022 : Guest 68: 6/10
Dec 14 2022 : Guest 24: 10/10 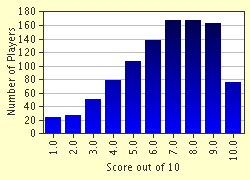 
Other Destinations
Explore Other Quizzes by morrigan