Australia, the Island Continent, is obviously surrounded by sea - which is full of stinging nasties! Can you identify the particular 'nasty' from the description given? All questions are multiple choice.

Quiz Answer Key and Fun Facts
1. I am the deadliest of my kind. I am quite small in comparison to my relatives and have a colourful name that reflects my habit of changing colour when I sense danger! What am I?

The Blue-ringed Octopus has a venom that includes a toxin found in no other animal which paralyses and can kill within thirty minutes! Until the 1950's the Blue-ringed Octopus was not known to have actually killed anyone but some unexplained deaths have since been attributed to this tiny killer, which grows no larger in adulthood than twelve to twenty centimetres.
2. I am the most venomous fish in the world. Nothing special to look at, I lie buried in the mud or sand and await passing prey. What is my name?

The Stonefish looks just like an encrusted stone or piece of coral. Found scattered in northern waters the Stonefish has spines that, when alarmed, are raised almost vertically and are full of venom. No deaths in Australia have ever been recorded and in 1959 an antivenom was developed.
3. I am a voracious feeder, responsible for the destruction of great swaths of coral. I am also venomous. What am I?

Each of the hundreds of spines that cover the Crown-of-Thorns has a venomous sting. A puncture brings enormous pain and there is no known antivenom. Growing to nearly sixty centimetres in diameter the Crown-of Thorns breeds only once a year, however, over twenty million eggs are spawned by each adult female.
4. In the northern waters of Australia, I have been blamed for nearly as many deaths as those caused by sharks and salt-water crocodiles put together! What is my common name?

The box jellyfish is claimed to be the most venomous marine animal known. Australian species are transparent pale blue, almost invisible in the water and are by far the largest in the world with the most stingers and venom that is much more toxic than any other jellyfish.
5. Not noticed in Australian waters prior to 1960, I am a dangerous yet attractive marine species. I inhabit waters along the eastern coast of Australia from Sydney Harbour through to the Great Barrier Reef. What am I?

The Flower Sea Urchin is very dangerous, covered with large flower like stalks that are actually pincers. Venom is released once the pincers clamp down on anything that tries to sit/stand on or eat them and the venom may cause paralysis and death.
6. The most lethal of my kind is quite rare, but I can deliver venom with deadly precision. There are about seventy of my kind in Australia's northern, western and eastern waters. What is my name?

The Geographer Cone Shellfish is a killer! It is found in northern and eastern Australian waters, but is rare. All Cone Shellfish are highly valued by shell collectors, however, each has a harpoon like 'nose' with up to twenty teeth that injects immobilising venom into their victims.
7. Closely related to other venomous fish species, I am one of the most attractive of coral reef fish. Who am I?

A member of the scorpionfish family the Lionfish is a very beautiful fish. However, spines hidden within its lacy fins are venomous and can cause immense pain and swelling, followed by immobilisation of the limbs along with nausea, breathing problems, paralysis, delirium and convulsions.
8. Resembling an underwater tree, this creature can inflict a nasty sting. What is its name?

While most Sea Anemones are relatively harmless the blueish grey or light brown coloured Stinging Anemone found in Australian waters has strong toxins which can produce very severe effects.
9. My venom is more toxic than my land dwelling relatives and over thirty of the fifty known species worldwide live in Australian waters! What am I?

Most sea snakes will not attack humans, as they are very shy. In Australia there have been no recorded fatalities as sea snakes' fangs are small and the volume of venom low. They will bite if threatened but don't usually inject venom as it is kept for their prey, not for defence.
10. I look like a plant but sting like a bee! I am found in shallow reefs and around jetties. What is my common name?

Like a feathery plant, Fireweed is actually a large group of animals called Hydroids that have strong stinging cells used for their prey and in defence. A severe sting can cause inflammation, swelling and pain lasting up to a week and sometimes longer in very bad cases.
Source: Author Engadine 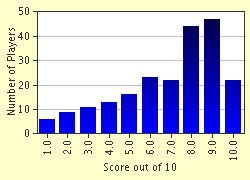