How much do you know about Australian wildlife? Test your knowledge and have fun!

Quiz Answer Key and Fun Facts
1. What two well known animals are on the Australian Coat of Arms?

The reason that these 2 animals were chosen is because neither of them can walk backwards. Hence on the Coat of Arms they are both facing each other depicting a nation that ONLY goes forwards and never backwards.
2. Which of these Australian birds is flightless?

This is perhaps the most well known of the flightless birds of Australia. The male bird broods and raises the chicks.
3. What is the spiky egg laying mammal of Australia called?

The Echidna's spikes are used as protection from predators. Its short sturdy legs and strong claws enable it to burrow beneath the soil as well as a tool for searching out its food of termites and ants.
4. Name the wild dog of Australia that originally came from Asia.

The Dingo does not bark and does not have the distinctive 'dog smell' of domestic dogs.
5. Which of these is a flightless bird of Australia?

The Cassowary is often overlooked and yet it is notorious for its aggression and has actually killed humans in an attempt to defend its territory or chicks.
6. The koala eats exclusively the leaves of which tree?

Because the koala feeds exclusively on the leaves of the eucalypts which are low in energy and difficult to digest, the koala spends much of its daylight hours asleep in the fork of a tree.
7. The largest living marsupial is the ... ?

The Red Kangaroo is the largest living marsupial and dominates the fauna of the arid regions of Australia. Males are usually red whilst the females may be grey, red or even a bluish grey leading to the description as 'blue fliers'.
8. This bird is Australia's only stork? Also known as the Black-necked Stork.

This bird is Australia's only stork. Pairs for life. A large area of wetland is needed to support 1 pair.
9. Australia's famous 'dancing' bird is the ... ?

Famous for its dramatic and graceful dancing during mating season. Flocks are made up of family groups, each led by a male.
10. Australia has 2 species of crocodile. One is the freshwater crocodile, can you name the other?

The Estuarine Crocodile (also known as the Saltwater) is the world's largest living reptile. Although seen in the open ocean, this species is mostly estuarine. The Freshwater Crocodiles are smaller and prefer creeks and pools.
Source: Author Chianti 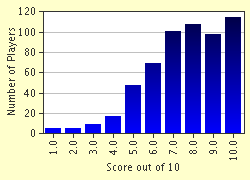 
Other Destinations
Explore Other Quizzes by Chianti