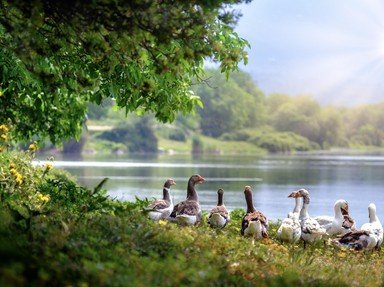 In this quiz I introduce you to some well known birds in the land of Israel.

Share on Facebook
Share on Twitter
Share by E-Mail
Author
yaarbiriah
Time
7 mins
Type
Multiple Choice
Quiz #
129,922
Updated
Nov 24 22
# Qns
10
Difficulty
Difficult
Avg Score
4 / 10
Plays
710
This quiz has 2 formats: you can play it as a or as shown below.
Scroll down to the bottom for the answer key.

Quiz Answer Key and Fun Facts
1. Which dove migrates to Africa for the winter and returns to the Holy Land in the Spring ?

The Turtle dove's call is a gentle purr. The Laughing dove, also known as the Senegal or Palm dove, is an introduced species and found in all human settlements throughout the year. The Collared dove is found in rural areas and the edges of cities. The Town pigeon is actually the same bird as the Rock dove which still nests wild in the Judean desert.
2. Which bird is often assumed to be a hummingbird by American immigrants and visitors?

The male orange tufted sunbird has an iridescent green and purple sheen though he seems black at a distance. The female is modest brown/grey. These birds have spread successfully throughout the country, enjoying the nectar of flowers in gardens and parks.
The other birds are fictional :).
3. This bird hunts for food on the ground, probing for bugs with a long slender curved bill. It has a striped black and white wings and a long crest that is raised above the head when the bird is excited.

'Dukifat' in Hebrew, the English name echoes the bird's owl like call. This bird is commonly found on lawns and trees in parks throughout the country.
4. It looks like a large black starling, has a patch of orange on each wing and if you whistle to it, it will probably whistle back !

These Grackles are common around the Dea Sea area, though flocks are known to roam the entire country outside the breeding season. Many birds show up in Jerusalem to the north, several thousand feet above their usual Dead Sea haunts.
Jackdaws are small crows common on city outskirts. They have greyish heads and raucous, slightly nasal sounding calls.
Blackbirds are thrushes and beautiful songsters, often heard making their music in the parks and gardens of the region.
5. These perky garden birds love fruit and bugs, have dark heads with a slight crest, neat grey plumage and a splash of yellow under the tail.

Bulbuls have an amusing warbling nonsensical chatter and always go about in pairs or small groups.
Graceful warblers are tiny long tailed birds also common around human dwellings. Their song sounds like a loud alarm clock! Blackcaps are very common warblers but they are not so easily noticed by passersby as they busily hunt insects in the bushes.
6. Which majestic long billed bird with white and black wings is often seen in awesome flocks, migrating across the country in spring, on passage from Africa to Europe?

These birds are called 'Chasida' in Hebrew. This means bird of loving-kindness because of the dedication the parents have for their chicks.
7. Which common grey and white bird is known to children as the harbinger of the rainy season since it flies to Israel from northern Europe and Russia to winter here?

White wagtails are known as 'nachalieli' from the Hebrew word for stream, 'nachal' since many birds of this family are found along streams. The white wagtail is quite happy hunting for tiny bugs on the streets and sidewalks of the city, and huddling in huge roosts in trees on the cold winter nights.
Stonechats, black redstarts and wheatears are also beautiful insect eating birds which can be found close to human habitation in their season.
8. Which small bird of prey is special in that it nests in loose colonies, is with us only during the summer and nests in the eaves of century old buildings in inner city Jerusalem?

Though similar to the larger common kestrel in colouring, the Lesser Kestrel has a smaller weaker bill and hunts large insects and small lizards rather than rodents, birds and other typical falcon prey.
9. Which white bird is often found around livestock, hoping that the feet of the larger animals will disturb some tasty locust or other treat?

Cattle egrets are related to herons though they are pure white in colour with beige plumes on head, throat and back. Though they hunt in fields with the cattle their nesting colonies are found on trees by water.
10. Which large colourful bird can be heard 'laughing' loudly in the trees and eats different food from most other members of its family?

The White breasted or Smyrna Kingfisher prefers lizards and frogs over fish and can often be found on kibbutzim and other rural areas far from water.
Source: Author yaarbiriah

This quiz was reviewed by FunTrivia editor crisw before going online.
Any errors found in FunTrivia content are routinely corrected through our feedback system.
Related Quizzes
1. Let's Say Hi to Friends Who Fly Average
2. Santa Birdy Average
3. Birds of Antarctica Average
4. Boobies and Beyond: Birds of the Pacific Islands Average
5. The Truth About Birds of Central America Average
6. Birds of Cambodia Average
7. Watching as the Birds Go By Average
8. Birds of Cambodia - The Passerines Average
9. The Birds in Europe Easier
10. Birds of East Africa Average
11. North American Birds Tough
12. Encounters of the Feathered Kind ( W Europe) Difficult


Other Destinations
Explore Other Quizzes by yaarbiriah