This quiz is about cats that actually like cold weather.

Quiz Answer Key and Fun Facts
1. What is a Skogkatt?

The Norwegian forest cat is a natural breed and originates from Norway. Although the origins are unknown, according to Norwegian folklore they were family pets of the Vikings. Unlike most cats they like water, and catch fish in lakes and streams.
2. Where does the snow leopard live?

The snow leopard lives in Central and South Asia, mainly in mountainous areas. It is highly endangered with estimates of only 4000 to 7000 animals still living in the wild. Snow leopards are solitary and like most cats, strictly carnivorous.
3. What is the Amur tiger better known as?

The lynx is a medium-sized cat endemic to Northern Europe, Asia and Canada. Body color ranges from brown to golden to white-beige. Their most outstanding feature is the black hair tuffs at the tips of their ears. They are solitary animals, only joining one another for breeding. Their main diet is hares and rabbits, but deer are also regularly caught.
5. Which of these is a cool cat that likes to live in a cold climate?

The Maine coon cat is the largest domestic cat breed. Also known as the American wild cat it mainly lived on farms, where the farmers appreciated its ability to catch vermin. As a cold climate animal, it has a long shaggy coat that starts short over the head and becomes longer over the back, stomach and legs.

Although this makes the cat very pretty, this warm coat developed out of necessity for survival in very cold weather.
6. The caracal is a cold climate cat.

The caracal is sometimes called the African lynx or desert lynx as a result of its tufted ears. Its name comes from the Turkish word "karakulak" which means "black ear". It was once trained in Iran and India for bird hunting. A trained caracal could down a large number of birds in one sweep of its paw. It is endemic to Northern Africa, the Arabian peninsula, and southwestern Asia.
7. Which of these cats lives in the Rocky Mountains?

This large feline is the largest wild cat in North America and the second largest in the Americas after the jaguar. It is a night hunter that mainly preys on deer, although smaller prey like coyotes and raccoons are also on the menu.

Although on occasion humans have been attacked this is very rare. According to statistics there are on average only four attacks and one human fatality each year in all of the USA and Canada.
8. Which of these cats is the national Russian cat?

The Siberian is a medium to large domestic cat. Its long outer fur is waterproof with a very dense undercoat. This makes it very well adapted to the icy Siberian winters.
9. The mountain lion and the cougar are two names for the same animal.

It is also known as the puma or catamount.
10. The saber tooth tiger is almost extinct apart from a few animals left high up in the Arctic.

The saber tooth tiger became extinct around 10,000 years ago. The reason for this extinction is not clear. Speculation roams from humans to the changing climate with the end of the last ice age.
Source: Author Bogdiver 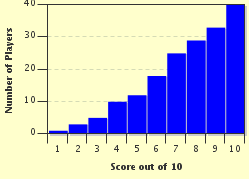 Related Quizzes
This quiz is part of series Commission #34:

Don't sit around catching Zs! Instead, get buzzing for another Commission of quizzes-- the thirty-fourth!-- all of which came from Author'z Lounge writers who had to receive a title containing the letter Z. This Commission took off in August 2014!


1. Zeitgeist in Zurich Average
2. Zipping up the Zips Average
3. Getting Lazy With "Z" Easier
4. Zippity Doo Dah Very Easy
5. Zeroing in on the Truth Average
6. What I Learned in Jazzercise Easier
7. Freeze the Sneeze Average
8. "Zing! Went the Strings of My Heart" Easier
9. Zany Things to Do With Your Body Average
10. What's With the Azzurri Average
11. Puzzle Pizzazz Average
12. Amazing Easier


Other Destinations
Explore Other Quizzes by Bogdiver