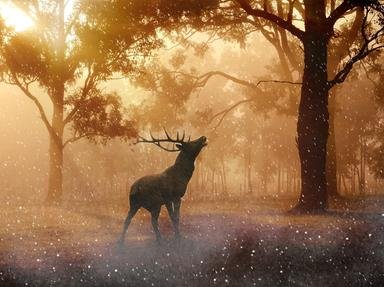 Getting My Goat Trivia Quiz

Get your goat is a slang term meaning to make you annoyed or angry. Since I don't normally get annoyed or angry, I have decided to channel my energy into searching for real wild goats!

Quiz Answer Key and Fun Facts
1. Let's start our journey from the place scientists believe that Homo sapiens started his long journey towards Middle East and Europe. The place is Africa. This really gets my goat, because there is only one place in Eastern Africa were wild goats can be found. This goat is called Walia ibex and can only be found in which country?

Kri-Kri or Agrimi is the name of the Cretan ibex. It can be found only in Crete and three small islands just off the coast of Crete. It is the only species of Ibex in Europe. A gri-gri or gris-gris is a climbing device.
3. In which of the following countries can one come across wild goats?

The wild goat (Capra aegagrus) lives mainly in the Middle East, Pakistan, Afghanistan and Turkey. Capra aegagrus is the ancestor of the domestic goat. It likes rocky places with steep cliffs. Both male and female have horns, but the male has larger horns that curve upwards and back. Their natural enemies are wolves and leopards.
4. In which European country can one see in the wild the Capra pyrenaica?

Capra pyrenaica is an ibex and can be found mainly in Spain. As the name suggests this ibex used to live in the Pyrenees but sadly it has become extinct in Andorra and France. It is known under the names of Iberian wild goat, Spanish ibex and Pyrenean ibex.
5. The Capra ibex, also known as steinbock, lives in which part of Europe?

It is also known as Alpine ibex. It lives in the Alpine regions of France, Italy, Austria, Germany and Switzerland. The Pyrenees are between France and Spain, the Apennines in central Italy and the Carpathians are in central and eastern Europe. The Alpine ibex likes rocky places at high altitude. Both male and female have horns but on the male they are much larger. Horns on the male can grow up to 1 metre long, whereas on the female the only grow to about 35 cm.

The gestation period is about 170 days and normally they give birth to one kid.
6. Which ibex can be found in both Egypt and Israel?

The Nubian ibex (Capra nubiana) can be found in desert and mountain regions of Northeast Africa and the Middle East. The Nubian ibex is smaller than other ibexes.
7. What is the Capra falconeri known as?

Capra falconeri is known as Markhor. Markhor is a combined word and in Persian it means the snake eater or killer. It is named falconeri from the name of the Scottish palaeontologist and botanist Hugh Falconer who worked in India in the 19th century.
8. Where would you expect to find Capra caucasica?

The mountains of Caucasus are the habitat of Capra Caucasica. Georgia is part of the Caucasus region. It is also called West Caucasian tur because it can be found in the western side of the mountain range. Capra caucasica are on the endangered list. It lives at altitudes between 800 and 4000 meters.

The gestation period is about 160 days and normally one offspring is produced. Both male and female have horns.
9. Where in Asia is the Chiltan ibex endemic?

The Chiltan ibex (Capra aegagrus chialtanensis) is endemic to Pakistan. Eritrea and Sudan are in Africa and Georgia in Europe. The Chiltan ibex is on the endangered list. The gestation period is about 160 days and twins are born very frequently. Their horns are very sought after and are used in the Asian medicine market.
10. Capra aegagrus blythi is a wild goat native to Pakistan. By what other name is it known?

The Sindh ibex takes its name from the Sindh province of southern Pakistan. The Nubian ibex can be found in Africa, Alpine in the Alps, and Cindy is just a made up name. The gestation period is about 170 days and normally one kid is produced. Both male and female have horns. The male has horns shaped like a scimitar that grow up to 1 metre long. Only the males have beards.
Source: Author gme24 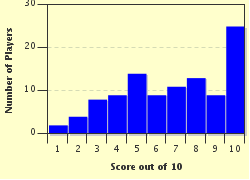 Related Quizzes
1. How High Does Your Knowledge of Giraffes Stand? Very Easy
2. All About Okapis Easier
3. Takin Care of Business Easier
4. Let's Talk About Ibex Average
5. Have I Got Gnus for You Average
6. The Gargantuan Gaur Average
7. White-tailed Deer In My Yard Average
8. Endangered: The Alluring Tamaraw Average
9. Endangered: The Key Deer Average
10. This Little Piggy Went to Market Average
11. Smallest Antelope in Africa. The Blue Duiker Average
12. The Sacred Bongo Average