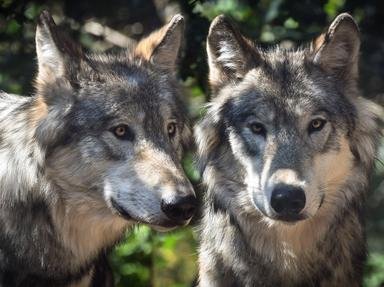 How about a photo quiz on ten of the world's wild canines. Give one of the these dogs a bone and you can be sure that they will probably eat it and possibly take one of your fingers along for dessert!

Quiz Answer Key and Fun Facts
1. This is a photo of which cold-loving wild canine?

The Arctic wolf lives in the far northern regions of Alaska, Canada, and Greenland. Little is known about this beautiful animal as it tends to live in areas which are inhospitable to man. They have very thick white fur which provides warmth and camouflage. Arctic wolves which are kept in zoos often lose some of their hair, as it is not needed for warmth and can sometimes look smaller than their wild compatriots.

They are superbly adapted to live in the frigid tundra and can go weeks without food, spend months at a time in darkness, and can live most of their lives in temperatures that are below zero.

They live in small family packs which cooperatively hunt seals, hares, caribou and other indigenous species.
2. Found mainly on the Indian sub-continent, can you name the wild dog in this photo?

The dhole or Asiatic wild dog is a very unique animal. It has less teeth and more teats than other canids. It is the only existing member of the genus Cuon which is slightly different than Canis. This endangered dog is threatened by habitat loss, other feral and tame dogs, and competition for food.

The dhole lives in large family packs which work together when hunting food. The dhole is one of the few animals that allows the puppies in the pack to eat before the adults.
3. If I tell you that the fennec fox has sand colored fur and large ears to dissipate heat, will that help you figure out where this wild dog lives?

The large-eared fennec fox makes its home in the northern areas of Africa involving the Sahara Desert. This animal is not often seen, as it sleeps during the day and is active at night. The fennec fox is the smallest of the wild dogs and is well-adapted to the desert environment.

The large ears help dissipate heat, and helps the animal hear prey moving underground while the fur provides camouflage against their main predator, the eagle owl. Fennec foxes live in large adjoining dens and population numbers appear to be stable.
4. What is the curious name of this animal, one of the few members of the wild dog family that makes a habit of climbing trees?

Nyctereutes procyonoides means night wanderer and is the proper name for the raccoon dog. Indigenous to eastern areas of Asia gets its name from the noticeable resemblance to the raccoon, to which it is NOT closely related. After being introduced into areas of central and western Europe, this wild dog is now looked at as a dangerous invasive species.

They are the only canids known to hibernate when weather calls for it.
5. What is the name of this wild dog which derives its name from an Aztec word meaning trickster?

The wily coyote has a wide range running from Panama all the way to northern parts of Canada. This animal is very adaptable and can live in the desert, in the mountains, in the swamp, and in residential neighborhoods. It comes in a variety of colors and are one of the most intelligent of the wild dogs. Coyotes tend to be monogamous and both parents help feed the pups they bear by regurgitating meat for the pups until they are old enough to take hunting.

The coyote has also been known to mate with domestic dogs and wolves if they run across a female who is in heat.
6. The apex predator in Australia, what kind of wild dog is seen in this photo?

This is a photo of a dingo. They are found in extreme southeastern Asia and in Australia. They hunt rabbits, rats, kangaroos, and livestock. Many in Australia view the dingo as a symbol of their country and there are those who fear that the dingo will become extinct as so many other Australian animals have done in the past. Dingos are social and while they are often seen alone, most belong to a pack with clearly defined territories. Dingos are adaptable and can change breeding habits, hunting habits, and social habits, when this is needed for survival.
7. Anubis could tell you that this is a photo of which wild canine?

Anubis, ancient Egyptian god of the afterlife, is often depicted as having the head of a jackal. There are three subspecies of jackal which are found in Africa and southern Asia and small regions of south-central Eurasia. The jackal is an opportunistic, scavenging, omnivore which will also hunt small to medium sized animals of all kinds.

They live in small packs controlled by a dominate mating pair which vigorously defends the packs territory from other pairs of jackals which may attempt to intrude.
8. What is the name of this wild dog which is found in the Andean regions of South America?

This is an image of the Andean wild dog known as a culpeo. It is the second largest canid in South America. Very foxlike in appearance, it has fur that is a mixture of red and gray with a white chin. The culpeo does eat some plant material and carrion, but the majority of its diet is made of rabbits, birds, rodents, and occasionally, livestock. With a stable population, shy nature, and adaptability, the culpeo is one of the least threatened wild dogs.
9. The largest member of the wild canids, what is the animal in this picture?

This is a photo of the magnificent gray wolf which makes its home in the remote northern regions of North America and Eurasia. It has large broad paws designed to walk on snow and long bushy fur that keeps it warm in the winter. Despite its name, the grey wolf comes in many colors including white, red, black, brown and a mixture of any and/or all of these.

The gray wolf is the sole ancestor of the dog and is found in the mythologies of many cultures around the world. Most wolves are very social and live in packs of related animals, headed usually by a mated pair, who are usually the parents and/or grandparents of all members of the pack.
10. The striped hyena is the largest wild dog in Africa.

Although it looks like one, the hyena is not a dog. They are part of the Hyaenidae family, one of the most important mammals in the ecosystem of Africa. They share features of both dogs and cats, but are very distinct species. The largest wild dog in Africa is the beautiful African wild dog also known as the ornate wolf and painted hunting dog.
Source: Author dcpddc478 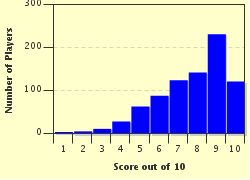 Related Quizzes
This quiz is part of series I Love Dogs!:

A few quizzes on dogs and puppies.


1. A Great Deal of Puppy Love! Easier
2. Some of My Best Friends Average
3. Even More of My Best Friends Easier
4. X Barks the Spot Average
5. Giving The Dog a Bone Average
6. Give the Dog a Bone Average
7. Doggies in Hiding Easier
8. Furry Persons and Their Human Companions Average
9. Do you DOG? Easier
10. Zoonosis is NOT a Word For a Dog's Nose Average