Are you owned by a Bengal cat? Are you considering turning your house over to one? What do you know about this regal breed?

Quiz Answer Key and Fun Facts
1. The Bengal cat is a hybrid of a wildcat and a domestic cat. Which wildcat is used to create a Bengal?

The Asian leopard cat is a jungle cat that inhabits a wide range in Southeast Asia. It is similar in size to a domestic cat, although there are size variations in different areas of Asia. Its size and desirable coloring made it a good choice for breeding with a domestic cat. The Bengal name actually comes from the taxonomic name for the Asian leopard cat, Prionailurus bengalensis.

The coat patterns of a Bengal resemble that of an ocelot or a clouded leopard, but the latter is a bit large for breeding with a domestic cat, and attempts to create an ocelot/domestic hybrid have resulted in sterile offspring. A domestic cat probably wouldn't fare too well with a Bengal tiger.
2. Several breeds of domestic cats have been used in creating Bengals. Which of the following breeds WOULD NOT be a good choice for creating a Bengal?

One of the distinctive physical traits of a Bengal is its pronounced muzzle -- it contributes to the Bengal's wild look. The flat face of a Persian would not promote this trait. The Bengal is also a shorthaired cat while the Persian has a long coat. The Abyssinian, Egyptian Mau and American Shorthair are common choices for creating a Bengal.
3. Jean Mill is usually credited with founding the Bengal cat breed. In 1963, she bred a wildcat with a domestic cat, with the resulting female offspring being fertile. Where did this breeding take place?

Several others had attempted breeding various types of wildcats to domestic cats, and although some of these breedings were successful, the resulting offspring were sterile. Jean Mill proved that fertile offspring were possible when her Asian leopard cat was breed to a domestic tom. She began developing the Bengal breed in Yuma, Arizona (I had to sneak Arizona into this quiz!) and successfully produced a second-generation litter before having to abandon her endeavor due to the death of her husband. She resumed her breeding efforts in the late 1970s and finally created the Bengal cat as we now know it by breeding an Asian leopard cat with an Indian Mau in the 1980s.

Not all cat organizations support wildcat/domestic hybrids, but Jean Mill's purpose for developing the breed was noble. At the time, it was fashionable to keep wildcats as pets (Jean bought her Asian leopard cat at a pet store). Although the kittens would be similar in temperament to domestic kittens, once they reached puberty, their wildcat traits would emerge, and these cats were frequently abandoned. Jean believed that creating a domestic cat with the wildcat appearance would solve this problem.
4. Bengal cats were created for their exotic spots, but what other coat pattern occurs?

The marbled Bengal coat resembles that of a clouded leopard. Oddly enough, it isn't a trait that Asian leopard cats are known to have, so it appears that this trait is inherited from the domestic side.
5. Which of the following is a coat trait that is unique to the Bengal breed?

Several other domestic cat breeds have spots, but none have glitter -- an appearance of gold dusting on the fur of the cat that gives it a slight metallic look. Not all Bengals have glitter though, and it isn't required according to the International Cat Association's breed standard.

Another coat trait unique to Bengals is the rosette. This is a two-toned spot, which gives the cat a bit of a jaguar look. It also doesn't occur in all Bengals, but it is highly desirable.
6. In which of the following ways does a Bengal cat NOT differ from other domestic cats?

You might expect the claws to be different, given their wild ancestry, but a Bengal's claws are the same as other domestics -- equally destructive.

The Bengal is the dachshund of cats -- besides the coat, the long body is the first thing you'll probably notice about a Bengal. Watching a Bengal stretch is a treat! Pick up a Bengal, and you'll immediately realize that these are muscular cats -- they're heavier than they look. The rear legs in particular are very powerful and give the Bengal tremendous leaping ability. They can reach the top of the refrigerator in a single bound. The Bengal head is wide and wedge-shaped and has a very prominent muzzle with thick whisker pads. It is smaller in proportion to the body than other domestic cats.
7. Your friend proudly displays her new Bengal kitten, but you suspect she has been duped. You turn the kitty over. What are you looking for?

A Bengal must have spots on its belly. Even a marble Bengal has them, and before a kitten's fur grows in, you'll see the spotted marks on its skin.
8. Bengal cats are known for having doglike traits. Which of the following is NOT a Bengal trait?

Bengals have several doglike traits. Fortunately, drooling is not one of them. They can be trained to fetch, perform tricks and walk with a leash. They love water! A common Bengal trait is to splash in their water bowl (it's been suggested that this is an instinct from their wild ancestry -- they're clearing the water to get a fresh drink). They may also "help" with the dishes and join you in the bath.

Bengals are also people-cats. They'll follow you around, and if the family is gathered together watching T.V., the Bengal will be curled up right there with you. Enjoy these moments though, because when a Bengal is awake, it is on the move. These are extremely active and mischievous cats. They will find entertainment in the oddest places. Baby-proof your home, as if you were bringing home a six-foot baby...
9. Even the Bengal voice is different from other domestic cats. They make a variety of sounds to let you know exactly how they feel! But what sound are you UNLIKELY to hear from your Bengal?

If your Bengal barks at strangers, you have a keeper! Some Bengals have been described as having a low bark/growl, but it's associated with food, not strangers.

The Bengal yowl is distinct. It gets noticeably louder if you fail to meet the Bengal's demands, whether it be for food, water or opening a door. The deep yowl before vomiting is a carpet-saver; when you hear it, you have a matter of seconds to move the kitty to a cleanable surface (and unlike the hairball cough, the vomit yowl will always be followed with a spew). Chattering at birds is not uncommon with other domestic cats, but the Bengal may also chatter in other situations, such as being disturbed while sleeping or being stared at.
10. Some people might confuse Bengals with Ocicats. There are some physical differences, but what is the main difference between the two breeds?


Answer: The Ocicat was created from domestic cat breeds

The Ocicat was created around the same time as the Bengal, but the Ocicat resulted from the breeding of a Siamese and an Abyssinian, both domestic breeds. And no, they aren't mean! They actually have similar personality traits to a Bengal.

Physically, they mainly differ from a Bengal in head shape/features, in spot patterns and in coloring. An Ocicat looks like a domestic cat with spots, while a Bengal has a decidedly wildcat look to it.


Bengals are relatively rare cats and thus they can be expensive. But anyone owned by a Bengal will tell you that a house without a Bengal just isn't a home -- it may be quieter or less disheveled, but isn't life about excitement? If you are considering a Bengal, please visit the following sources to ensure that your personality will be acceptable to the cat: 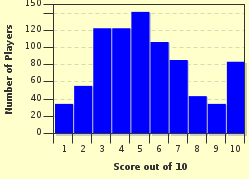 Related Quizzes
1. A Very Photogenic Cat Average
2. Ragdolls Average
3. Oh, How cute! Average
4. Manx Cats Average
5. How Much is That Sphinx in the Window? Average
6. Cat-alogue Average
7. In Praise of the Siberian Cat Average
8. Maine Coon Mania Average
9. Cat Planet Average
10. Cat Breeds and Some Cute Photos Too Average
11. What Breed of Cat am I? Tough
12. Beautiful Birmans Tough