Funny man, philanthropist, citizen, actor, singer, husband and father, world traveler and supporter of the troops. Bob Hope was all this and much more. See how much you know about this multi-faceted entertainer.

Quiz Answer Key and Fun Facts
1. The name we know him by, Bob Hope, was actually a nickname itself. What was Bob Hope's name at birth?

Bob's scrawny stature as a boy made him the butt of jokes and a punching bag for schoolyard bullies. His sense of humor developed quickly as a defense mechanism. In his teens, Bob changed the name he'd been given at birth, "Leslie", to a more American-sounding moniker, "Bob." He used to joke that he didn't want to be considered "hopeless" when the roll was called at school as "Hope, Leslie." Bob's middle name, "Townes," was his mother's maiden name.
2. Bob Hope has been called the "Quintessential American." Surprisingly enough, he wasn't born in the US at all. Bob Hope came into the world on May 29, 1903 where?

Hope was the fifth of seven children, all boys, born to a British father and Welsh mother. The clan moved to Cleveland, Ohio in 1907 or 1908 (the sources don't agree), when Bob was four or five, in search of a better life. The whole family became US citizens in 1920 when Bob's father was naturalized.
3. Though Bob was bitten by the entertainment bug early in life, he had a variety of other jobs before seeking his fortune in vaudeville. One of these early endeavors was as a professional boxer. What was Hope's nickname in this short-lived career?

Lucky for us, Bob wasn't a very good pugilist. The world may never have known his one-liners and zingers if he'd been a successful boxer. Though a few well-placed blows could have explained Bob's most interesting facial feature, his nose, he always maintained that the boxing did nothing to it. His schnozzle was all his own!
4. Apart from being a natural comedian, Bob Hope was trained as a singer and dancer. In fact, Bob "Twinkle-Toes" Hope broke into show-biz as half of a dance team. What was his partner's name?

Mildred was Bob's first girlfriend and later, fiancée. Unfortunately, she hadn't gotten permission from her mother to become a dancer, and the romance and partnership ended abruptly the first time Mildred's mom saw the act. Bob's next partner was Lloyd Durbin, with whom he formed a not-too-talented comedy duo. Though Hope was in his first play on Broadway with Ruby Keeler, she was the star and he was just a bit player.

His partner at that time was named George Byrne. Finally, Bob did work with Bing Crosby a few years later (and they made a very good duo, better than his earlier partners by a long shot).
5. Bob Hope met his future wife, Dolores Reade, while they were both appearing in what would be Bob's first success on Broadway, the musical "Roberta".

Bob was appearing in the musical, but Dolores wasn't. She was a singer at a nightclub near the theater district in New York City. Bob and Dolores were introduced by one of the other actors in "Roberta," George Murphy. It was a whirlwind romance, which became one of the longest lived marriages in Hollywood history - lasting for almost 70 years until Hope's death in 2003 at the age of 100.
6. Bob "Dulcet-Tones" Hope, made a big splash in his first big movie appearance. Though he wasn't known primarily as a singer, Bob did have a nice voice and could hold a tune. Hope's well-known theme song came from his first important film appearance in what?

Bob's theme song was called "Thanks for the Memory," but that was not the title of the movie. The best thing about "The Big Broadcast of 1938" (1938) was Bob's bittersweet rendition of that lovely tune with Shirley Ross. Though the song was a sad reminiscence of a closeness lost by a divorcing couple, Bob's use of the tune over the years became a joyous celebration of all he had achieved. Bob was not in the movie version of "Roberta" (1935), which had been a successful outing for Fred Astaire and Ginger Rogers. Finally, "The Road to Singapore" (1940) was the first of the raucous "Road" Pictures that Bob made with Bing Crosby and Dorothy Lamour.
7. One of Bob's most famous personal and professional relationships was with Bing Crosby. The two men first met and appeared together at the Capitol Theater in New York in 1932, where Bob had a radio show.

Many of Bob Hope's colorful nicknames came from his friendship and good-natured rivalry with Bing Crosby. "Old Ski-Nose" and Bob "Three-Putt" Hope are just a couple of the many labels that Bing came up with for Bob. Bob was not to be outdone, however, and he called Bing "The Old Groaner" and Bing "Mr. Vitamin C" Crosby (for his association with Minutemaid orange juice), among other names.
8. Bob "Always-on-the-Road-to-Somewhere" Hope and his Road-side companion, Bing Crosby, made seven of these buddy pictures together over the years. They also appeared in a number of other films with each other, sometimes in unbilled cameos. Which of the following movies was NOT one of the Road pictures that Bing and Bob made together?

"Road to Tokyo" was not one of the Hope-Crosby Road pictures, but it was a throwaway line from "Road to Morocco" (1942) that Paramount nixed in the final cut. Bing and Bob were to have signed up for the Marines at the end of the movie, signing off with, "See you on the road to Tokyo." Perhaps the saddest Road picture that the pair never made was "Road to the Fountain of Youth," which they were planning as as reunion for Hope, Crosby and Lamour when Bing died in Spain in 1977.

It doesn't look like anyone will ever reach Bob's record of hosting the Academy Awards 17 times. No one did tie it in the 20th century. Billy Crystal hosted six times between 1990 and 2000. There was no host on five different dates (in 1948, 1969-1971, and 1989). Jerry Lewis hosted only four times, and Whoopi Goldberg hosted only three times between 1994 and 2000. Both she and Billy Crystal have hosted in the 21st century, but they are still a long way away from Bob's record.

Though Bob Hope never won a competitive Oscar, he did win four honorary Oscars (in 1941, 1945, 1953 and 1966), as well as the Jean Hersholt Humanitarian Award (in 1960). Another of Bob's many nicknames came from his never being nominated for a competitive Oscar award: Bob "They-Call-It-Passover-at-My-House" Hope.
10. Bob Hope's support of the US Troops is legendary. In which of the following wars did he NOT host a war-zone tour to entertain the soldiers?

Bob made his first tour in 1941 in the throes of the Second World War. His most treasured nicknames came from these visits Bob "GI-Joe" Hope and "America's No. 1 Soldier in Greasepaint". Until 1990, Bob spent the holidays and many other normal days visiting and cheering US troops overseas. Bob received one of his greatest tributes in October 1977, when members of Congress unanimously passed a resolution making him an Honorary Veteran, the first person so recognized in the history of the United States.
Source: Author shuehorn 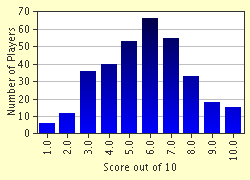 Related Quizzes
This quiz is part of series A Favorite From Each Category:

Here is a quiz I've liked from each category on fun trivia. All but one are mine, but since I've never written in Video Games, I've included one I enjoyed from that category. Hope you like these as well!