These Celebrities have adapted these nicknames through their careers, see if you can guess whose is whose! EASY!

Elizabeth Taylor called him that in 1989 and the name seems to have stuck.
4. 'Material Girl'?

'Material Girl' was one of Madonna's earlier hits and now it has turned into a nickname, mainly by the press.
5. 'Queen of Hearts'?

Diana said in an interview that she would like to be known as 'the queen of people's hearts' and after she died, many people left signs and cards calling her the 'Queen of Hearts'.
Source: Author Mouthy_angel 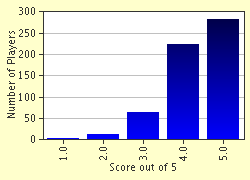 Related Quizzes
1. Skeletons in the Closet Average
2. What's in a Name? Average
3. They Were A.K.A. Average
4. Celebrities Named After Greek Legends Easier
5. What's My Name #2 Average
6. Who's In A name? Part 1 Difficult
7. What's In A Name? Average
8. Celebrity Real Names 2 Average
9. Who's That Difficult
10. What's My Real Name? 2 Average
11. The Name Behind the Name Average
12. Nom De Guerre Very Easy


Other Destinations
Explore Other Quizzes by Mouthy_angel