Stars burn brightly in Phoenix, Arizona. Here are some that have found their way to the front pages.

Quiz Answer Key and Fun Facts
1. Chester Bennington is the lead singer of which band that scorched the charts in 2010 with their concept album "A Thousand Suns"?

Bennington, born in 1976, is the lead vocalist and a songwriter for Linkin Park. Their debut album "Hybrid Theory" was certified diamond in the USA, meaning that it had sold in excess of 10 million units. Chester began his musical career with a band called Grey Daze before auditioning for his position with Linkin Park in 1998.

He also has a side project, a band called Dead By Sunrise. Coming from Phoenix it is rather appropriate that their debut album is called "Out of Ashes". It was released in 2009.

In recent times he has expanded his portfolio to include appearances in the movies "Crank" (2006), its 2009 sequel "Crank: High Voltage" and the film "Saw 3D" in 2010. Chester now is a strong campaigner against substance abuse.
2. Lynda Carter was Miss World USA in 1972 but is best remembered for her television appearances as which super heroine, with the alter ego of Diana Prince?

Sadly for Melody she did not progress as well as she may have hoped. She found herself in the bottom two, facing elimination, in the very first week of competition, did not need to sing for the second week and was in the bottom two again during the third week. This time there was no reprieve. Boasting a strong soprano voice she was recruited into the Pussycat Dolls' lineup to add power to the band's vocals. Being the youngest member in the band she earned the name "Baby Doll".
4. Jennifer Rubin's big break into movies was the role of Taryn White, in which 1987 horror film that was written by Wes Craven and was subtitled "Dream Warriors"?


Answer: A Nightmare on Elm Street 3

Jennifer started as a model for the Ford Modelling Agency, winning their International Model of the Year Award in 1984 and being selected as the model for a series of advertisements for Calvin Klein's "Obsession" range. Whilst "Nightmare" may have been a big break for her it also tended to typecast her somewhat. She has also made appearances in "Bad Dreams" (1988), "The Fear Inside" (1993), "Screamers" (1995) and "Twists of Terror" (1996).
5. Nicknamed Chief Falling Cloud, which US Marine portrayed himself in the 1949 film "The Sands of Iwo Jima"?

Ira Hayes will forever be immortalised in the iconic photograph of five US Marines raising the American flag on Mount Suribachi during the battle over the island of Iwo Jima during World War II. The photograph made Ira a national hero and, as a result, he was seconded into the Finance Division of the US Treasury in a bid to use his celebrity status to promote the Seventh War Bond Drive.
He appeared in the 1949 film with fellow marines John Bradley and Renen Gagnon alongside star Hollywood actor John Wayne.
6. Appearing in the 1991 film "Freddy's Dead: The Final Nightmare" as Mr Underwood is which Phoenix resident, best known for his album "Welcome to My Nightmare"?

Born Vincent Furnier, Cooper has made a name for himself as a shock rocker whose stage shows have incorporated such items as fake blood, boa constrictors and electric chairs. His band, Alice Cooper, achieved success with songs such as "I'm Eighteen" and "School's Out".

As a high school student Murray helped Arizona win its first National High School Rodeo Association Championship in 1987. At age 18 he entered the Guinness Book of World Records as the youngest person to win the PRCA All-Around Rodeo event and continued to dominate the event for over a decade.

He retired from rodeo in 2002 and co-founded the board for Professional Bull Riders. He was selected to feature in a series of commercials for the Miller Lite "Man Law" series. Ty has also been a big drawcard for reality television making appearances on "Fast Cars and Superstars" in 2007, "Dancing With the Stars" in 2009 and "Extreme Makeover: Homes Edition" in 2010.

In 2007 Country Music Television (or CMT) created the programme "Ty Murray's Celebrity Bull Riding Challenge" in which Ty attempts to pass on the skills of bull riding to nine celebrities.
8. Amy Davidson gained attention for her role as Kerry "Care Bear" Hennessey in which television series, that is notable as being John Ritter's last before his death?

"8 Simple Rules" ran for three seasons, 2002-2005, with its ratings dropping after the exit of Ritter. Amy featured in all 76 episodes as the sarcastic and smart, though naive, middle daughter with a passion for animal rights, hence the nickname "Care Bear". Amy's acting career began with advertisements which led to a spot in the TV movie "The Truth About Jane" (2000) before an appearance in "Judging Amy" (2001) and a recurring role in the Olsen twins sit-com "So Little Time" (2001-02). She also starred in the television movie "Firebreather" (2010).
9. Which actress, who made her film debut in "Superbad" (2007), won the MTV Award for Best Comedic Performance for her role in the 2009 film, "Easy A"?

Despite being a high school dropout at age 15, Emma Stone's star began to rise early. Voted the Most Exciting New Face for her efforts in "Superbad" she garnered a great deal of attention and award nominations for her turn as the con artist, Wichita, in "Zombieland" (2009). She also gained praise for her work in "Crazy, Stupid, Love" (2011) and "The Help" (2011). In 2012 she portrays Gwen Stacy in the re-working of "The Amazing Spider-Man".
10. Moving to Arizona when she was 13 years old which celebrity made a name for herself portraying the teen vixen Kelly Taylor in the television series "Beverly Hills, 90210"?

Born in 1972 Garth appeared as Kelly Taylor in all ten seasons of the television show, winning the Young Artist category at the Teen Choice Awards in the process. She also reprised her character in three episodes of the series "Melrose Place". Garth was successful in winning the role of Valerie Tyler in the TV series "What I Like About You" and won the Prism Award in 2008 for an outstanding performance in the miniseries "Girl, Positive".
Source: Author pollucci19 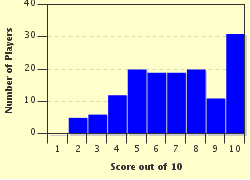