This includes famous Cincinnati personalities, not necessarily native to the city. I hope you find some of the answers interesting and surprising! Enjoy!

Quiz Answer Key and Fun Facts
1. Known formerly as Cincinnati's "Kid Mayor", this politician went on to have a successful talk show career. Can you name this person?

Jerry Springer was actually born in London, England. Initially, Springer was a campaign aide for Robert Kennedy. After Kennedy's death, he joined a law firm in Cincinnati, and eventually became a city council member in 1971. He was elected Mayor in 1977 at age 33.
2. This former singing cowboy from Cincinnati starred on a successful TV show. Who is he?

The Roy Rogers Show, along with Dale Evans and his horse, Trigger, ran from 1951 to 1957. Rogers was born in Cincinnati in 1911.
3. This Cincinnati-educated entertainer/actress once married an athlete/cross-dresser. Which is the correct answer?

Carmen Electra - Born Tara Leigh Patrick, in 1972.
4. This Cincinnati-born business mogul moved to another big city and developed a very successful baseball team and entertainment enterprise. Who is he?

Born in Cincinnati in 1938, Ted Turner, was a pioneer for cable television and the owner of the Atlanta Braves.
5. This infamous Cincinnati native is arguably one of the most recognizable mass-murderers of all time. Who is he?

Charles Manson - Born 1934. Nothing Cincinnati is proud of, but well-known nonetheless.
6. This Oscar-winning director from Cincinnati went on to direct some of the most famous movies of all-time. Can you name him?

Steven Spielberg - Director of the "Raiders of The Lost Ark" movies, "E.T.", and many more classics.
7. Which of these United States Presidents is NOT a Cincinnati or Ohio native?

Franklin Pierce was born in New Hampshire.
8. Early in her career, this actress from Cincinnati starred on the short-lived sitcom "Square Pegs" and also had a role in the movie "Footloose". Do you know this actress's name?

Sarah Jessica Parker went on to star in more memorable movies and TV rolls such as "L.A. Story", "Honeymoon In Vegas", and "Sex In The City".
9. This celebrity's dad and aunt became famous before he did. His aunt was a singer and actress, and his dad was a Cincinnati news anchorman. Who is he?

George Clooney - George was actually born in Augusta Kentucky in 1961, not far from Cincinnati. George actually tried out for the Reds at one time, but couldn't make the cut. Rosemary Clooney was a celebrated singer and actress from Cincinnati during the 1940s and 50s. Father Nick Clooney was a news anchorman for years at WKRC-TV in Cincinnati. Nick also went on to host a variety of PBS programs...
10. This famous Cincinnati-born baseball player wore #11 for the Macon Peaches minor league team. Who is this person? 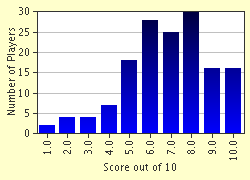 
Other Destinations
Explore Other Quizzes by leakypickle