Here is my quiz on the newest Harry Potter book. Hope you enjoy it! (Warning: if you haven't read the book yet, do NOT take this quiz!)


Answer: To warn him that Voldemort was back and causing trouble.

In the first chapter, Cornelius Fudge visits the Muggle Prime Minister and informs him that Voldemort is back and is behind all of the terrible things that have been going on. Fudge then introduces the Prime Minister to the new Minister of Magic, Rufus Scrimgeour.
2. What does Narcissa Malfoy ask of Snape when she visits him at Spinner's End?


Answer: To watch over Draco while he does what Voldemort asked of him.

In Chapter 2, Narcissa Malfoy and Bellatrix Lestrange visit Snape's house at Spinner's End. Narcissa tells Snape how Voldemort wants Draco to perform a task for him. Then she makes Snape make an Unbreakable Vow, saying that he will watch over and protect Draco while he performs the task.
3. Which person did Harry NOT choose as a Chaser for the Gryffindor Quidditch team?

At Quidditch tryouts, Harry chose Ginny, Katie, and Demelza to be Chasers; Jimmy Peakes and Ritchie Coote as the new Beaters; and Ron as Keeper.
4. Which class did Harry get an "Outstanding" in on his O.W.L.s?

On his O.W.L.s, Harry got an "Outstanding" in Defense Against the Dark Arts; "Exceeds Expectations" in Care of Magical Creatures, Charms, Herbology, Potions, and Transfiguration; "Acceptable" in Astronomy; "Poor" in Divination; and "Dreadful" in History of Magic.
5. On whom did Harry first try the "Levicorpus" spell?

Harry found the "Levicorpus" spell written inside the copy of "Advanced Potion Making" that had belonged to the Half-Blood Prince. Harry tried out the spell on Ron, and it caused him to hang upside down from his ankle in midair.
6. What did Dumbledore do to prove to Tom Riddle that there was a such thing as magic?

In the second memory that Dumbledore shows Harry, Dumbledore visits Tom Riddle at the orphanage and tells him that he has been accepted to Hogwarts. At first, Tom does not believe that there is a such thing as magic, and he demands Dumbledore to prove it. That is when Dumbledore makes Tom's wardrobe burst into flames.
7. Whom does Ron fall in love with after eating the Chocolate Cauldrons poisoned with Love Potion?

Ron accidental ate some Chocolate Cauldrons that had earlier been given to Harry from Romilda Vane. She hoped that Harry would eat them and fall in love with her. Ron then fell in love with Romilda, and Harry had to take him to Slughorn for an antidote.
8. Which one of the following is NOT known for sure to be a Horcrux?


Answer: the necklace from Borgin and Burkes that was used to curse Katie Bell

Dumbledore tells Harry that Voldemort has split his soul into seven--six parts are Horcruxes and the seventh part is inside his body. Dumbledore then says that two of the Horcruxes have been destroyed--one of them was Tom Riddle's diary (which was destroyed in the Chamber of Secrets) and the other is Marvolo's ring. Dumbledore and Harry then go to destroy the locket, which eventually turns out to be fake.
9. Why did Harry break up with Ginny?


Answer: Because he was afraid that Voldemort would try to hurt her.

At Dumbledore's funeral, Harry breaks up with Ginny. "Voldemort uses people his enemies are close to," Harry said to Ginny. Harry was afraid that Voldemort would try to hurt Ginny since they were so close.
10. Which unexpected couple do we find at the end of the novel?

In the hospital wing (after the encounter with the Death Eaters), Harry finds out that Tonks is in love with Lupin. At first, Lupin refuses to go out with her because he is a werewolf and he thinks she deserves better. However, at Dumbledore's funeral, Harry sees Tonks and Lupin holding hands.
Source: Author crazygurl12

This quiz was reviewed by FunTrivia editor minch before going online.
Any errors found in FunTrivia content are routinely corrected through our feedback system.
Most Recent Scores
Jan 13 2023 : klem2go2: 10/10
Dec 12 2022 : Guest 80: 6/10 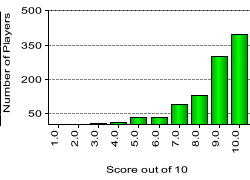 
Other Destinations
Explore Other Quizzes by crazygurl12