This quiz concerns the first half of Harry's sixth year at Hogwarts. Deals with some small points of the book. Spoilers ahead. This concerns the book and not any future films.

Share on Facebook
Share on Twitter
Share by E-Mail
Author
JaneMarple
Time
4 mins
Type
Multiple Choice
Quiz #
213,699
Updated
Dec 03 21
# Qns
15
Difficulty
Average
Avg Score
11 / 15
Plays
10082
This quiz has 2 formats: you can play it as a or as shown below.
Scroll down to the bottom for the answer key.

Quiz Answer Key and Fun Facts
1. At the beginning of the book, Cornelius Fudge is talking to the Muggle Prime Minister. Which member of the Order of the Phoenix has recently been found dead?

Cornelius Fudge often corresponds with the Muggle Prime Minister. Vance is believed to be killed by a Death Eater. Madam Amelia Bones, who cleared Harry at his hearing the year before, also has been found dead. Fudge is no longer the Minister of Magic. It is Rufus Scrimgeour.
2. What animal does Bellatrix Lestrange kill, when she and her sister, Narcissa, are going to see Professor Snape?

Narcissa Malfoy's husband, Lucius, is now in Azkaban. The sisters visit Professor Snape at Spinner's End, where he lives. Narcissa asks Snape to look out for Draco, her son, at Hogwarts. It is clear that Snape is still in contact with Lord Voldemort. Wormtail, also known as Peter Pettigrew, is Snape's servant in the house. Snape makes an Unbreakable Vow to Narcissa.
3. What time does Professor Dumbledore collect Harry from Privet Drive?

Before taking Harry to the Burrow, Professor Dumbledore takes him to meet Professor Slughorn. Professor Horace Slughorn is an old teacher. He taught at Hogwarts when Harry's parents were there. He was a Slytherin. He likes making friends with important people, or with pupils who show excellence. Professor Dumbledore and Harry persuade him to return to Hogwarts to teach.
5. What grade did Harry get for Herbology?

Professor Dumbledore is going to give Harry private lessons this year. Harry arrives at The Burrow to spend the rest of the summer. Harry gets seven O.W.L.'s. He has only failed Divination and History of Magic. He has not done well enough to continue with Potions. Ron got the same grades as Harry, except for no "Outstanding" .

Hermione, as usual, gets ten "Outstanding" and one "Exceeds Expectations".
6. Before Harry and the others return to Hogwarts, they pay a visit to Diagon Alley, to get their supplies and also to see Fred and George's magic shop. Two shops have been shut up, one is Ollivander's the wand makers and the other is Florean Fortescue's. What did that shop specialise in?

Both owners have mysteriously disappeared; whether they had joined the Death Eaters is unknown. Harry Hermione and Ron see Malfoy with his mother getting dress robes. Later they see him go to Knockturn Alley, and follow him under the Invisibility Cloak.

They see him threatening Mr Borgin of Borgin and Burkes - he wants something repairing. The trio see various Dark Art objects in the shop.
7. What sort of wood is Neville's new wand made of?

Harry asks Mr Weasley to search the Malfoy's home to find the thing Draco was talking to Borgin about. On the Hogwarts Express, a few selected pupils (including Harry Neville and Ginny) are invited to Professor Slughorn's compartment. Later, Harry follows Malfoy, under his Cloak to the Slytherin carriage.

He hears him boasting about the Dark Lord. Harry grows more convinced that Malfoy has become a Death Eater, in his father's place.
8. Who repairs Harry's nose and takes him to the gates of Hogwarts?

Malfoy discovers Harry hiding, and after beating him up, leaves him on the train. However Tonks rescues Harry and repairs his nose. Tonks looks a lot more dowdy and unhappy than last year. There is intense security on the Hogwarts gates. Unfortunately Professor Snape manages to escort Harry to the castle, and deducts points from him for being late.

Professor Snape mentioned this potion in Harry's very first Potion's lesson five years ago. Harry borrows a second hand book of "Advanced Potion Making" by Libatius Borage - he didn't think he had the grades to take the lesson but Professor Slughorn only wanted an "Exceeds Expectations". Unusually the book has helpful notes to aid Harry with his potion making.

It has been written inside by its previous owner. The book belonged to somebody calling himself or herself "The Half Blood Prince". Harry becomes immediately successful at potions, much to Ron and Hermione's disgust.

Professor Dumbledore is going to show Harry certain memories in his Pensieve, to help him defeat Lord Voldemort. The first memory is of a Ministry of Magic wizard, Bob Ogden. Ogden went to see the Gaunt family. The Gaunt's - Marvolo, his son Morfin and his daughter Merope - are descendants of Salazar Slytherin. Morfin is a Parseltongue, he can talk to snakes, and he had cursed a Muggle. Merope was Lord Voldemort's mother who died after giving birth. Ogden is now dead.
11. What is the first name of Peakes, one of the new Beaters on the Quidditch team?

Harry is the new Gryffindor Captain. The Chasers are Katie Bell, Ginny and Demelza Robins, a new find. Jimmy Peakes and Ritchie Coote are the Beaters. Ron is the Keeper again while Harry is the Seeker, as usual.
12. Harry finds helpful hints and spells that the Half Blood Prince has written in the Potion book. One of them is a hex that makes toenails to grow alarmingly fast. Who did Harry try this on?

This spell, as well as others, is written inside the second hand potions book. After their first visit to Hogsmeade, Katie Bell is given an opal necklace to give to someone at Hogwarts, but is taken ill when she touches it. It is obvious that Katie had been but under the Imperius curse and also the necklace is cursed.
13. In his next lesson with Professor Dumbledore, Harry is taken to a memory of Dumbledore's, and sees a much younger Tom Riddle. After Tom Riddle argued with a Billy Stubbs, what animal is found hanged?

Harry sees the orphanage where Tom was brought up, and sees a younger Professor Dumbledore tell Tom about how he has been accepted at Hogwarts as a pupil. Tom is a peculiar boy, who does not make friends easily; he was a bully and also a thief. He disliked his name as it considered it common. The younger Tom already knew he could talk to snakes.
14. Which aunt does Ginny taunt Ron about, saying he sleeps with a picture of her under his pillow?

Ginny is still with Dean Thomas, and it annoys Ron to see them kissing all the time. Harry also finds himself attracted to Ginny but tries not to show this, he doesn't want to ruin his friendship with Ron. Ginny says Ron is only annoyed because he's never kissed a girl.

The first Quidditch game against Slytherin goes well when Gryffindor win. Ron's nerves are cured when Harry pretends to give him Felix Felicis.
15. With whom does Harry go to Professor Slughorn's party?

Professor Slughorn has been organising special meetings for the selected pupils he liked best. It is nicknamed "The Slug Club". Ron is very jealous, as he is not invited. But Lavender Brown seems to have attached herself to him. Hermione goes with Cormac McLaggen, who narrowly missed out on getting on the Gryffindor Quidditch team.

At the party, Malfoy is discovered sneaking around the castle. Harry overhears Malfoy talking to Snape. They seem to be disagreeing on something and also Snape mentions the Unbreakable Vow. Bellatrix has also been teaching Malfoy Occumency. Look out for my second part of the quiz soon!
Source: Author JaneMarple 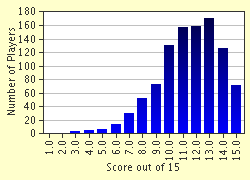