This is my favorite book of all time. Is it yours? *This quiz contains spoilers*

Quiz Answer Key and Fun Facts
1. Chapter 1: The Other Minister What did Fudge transform to make the Muggle Prime Minister believe that he was not a hoax?

The portrait in the Prime Minister's room announced when Fudge was coming.
2. Chapter 2: Spinner's End Avery, the Carrows, Greyback and Lucius are all Voldemort's followers.

Snape was telling Bellatrix that he wasn't the only Death Eater who did not attempt to find You-Know-Who when he vanished. Yaxley is not introduced until Book 7.
3. Chapter 3: Will and Won't Rufus Scrimgeour was previously assistant to the Head of office in the Department of Magical Law Enforcement.

Horace Slughorn is the Potions teacher at Hogwarts, Ambrosius Flume runs Honeydukes, a candy shop in Hogsmeade, and Ciceron Harkiss gave Ambrosius his first job.
5. Chapter 5: An Excess of Phlegm What did Harry get in his History of Magic O.W.Ls?

Harry got an A in astronomy, an E in Care of Magical Creatures, an E in Charms, An O in DADA, a P in Divination, an E in Herbology, a D in History of Magic, an E in Potions, and an E in Transfiguation.
6. Chapter 6: Draco's Detour Who ran the ice-cream place in Diagon Alley?

Ollivander is the wand-maker, Ambrosius runs Honeydukes, and Arkie Philpott is a random man.
7. Chapter 7: The Slug Club What is the name of Marcus Belby's uncle?

Anapneo is a spell to stop someone from choking. Bertie Higgs went with Cormac McLaggen to Norfolk to hunt nogtails.
8. Chapter 9: The Half-Blood Prince What is the name of Draco's grandfather?

Malfoy was "sick", Vaisey is a chaser on the team, and Harper was substitute for Malfoy.
10. Chapter 16: A Very Frosty Christmas "Oh, come and stir my cauldron, And if you do it right, I'll boil you up some hot strong love, To keep you warm tonight" How old were Mr. and Mrs. Weasley when they danced to this song?

Mrs. Weasley asked Mr. Weasley if he remembered, and he answered: "Mphf?"
11. Chapter 17: A Sluggish Memory How much do Apparition lessons cost?

Apparition lessons are given only to students who turn seventeen on or before the 31st August next. They are a twelve-week course taught by a Ministry of Magic instructor.
12. Chapter 22: After the Burial Hagrid and Slughorn sang a slow sad song about what dying wizard?

They were talking about James Potter but they didn't sing about him. Dumbledore hadn't died at that point. Hokey was Hepzibah's house-elf.
13. Chapter 25: The Seer Overheard Ron returned "A Thousand Magical Plants and Herbs" to the library.

Ron returned "A Thousand Magical HERBS and FUNGI" to the library.
14. Chapter 26: The Cave What or who did Harry see in the water?

Harry: "I think I saw a hand in the water- a human hand!"
Dumbledore: "Yes, I am sure you did."
15. Chapter 30: The White Tomb Who did Hagrid bring to Dumbledore's funeral with him?

Hagrid had been training Grawp since the 5th book, so he was able to take him to the funeral.
Source: Author hashahasha 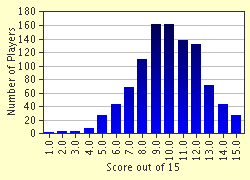 
Other Destinations
Explore Other Quizzes by hashahasha