This quiz is on random facts from the latest Harry Potter book, "Harry Potter and the Half-Blood Prince". BEWARE OF SPOILERS!

Quiz Answer Key and Fun Facts
1. What is the name of the Muggle Prime Minister's Junior Minister mentioned in the first chapter?

Herbert Chorley was put under a "poorly performed Imperius curse" by a Death Eater and it messed with his brain. He was too dangerous to remain living with his family and was moved to St. Mungo's.
2. What is "Spinner's End"?

Severus Snape resides on this street. It's where Narcissa Malfoy and Bellatrix Lestrange visit him to discuss Voldemort's plan for Draco.
3. According to the Ministry of Magic leaflet, who should you contact if someone you know is acting oddly?

"Should you feel that a family member, colleague, friend or neighbour is acting in a strange manner, contact the Magical Law Enforcement Squad at once. They may have been put under the Imperius Curse."
4. What is Dumbledore's favourite flavor of jam?

This is the answer to his security question to ensure that he really is Dumbledore, and not a Death Eater using Polyjuice Potion.
5. What colour is Tonks' hair and what is the shape of her face when Harry sees her at The Burrow?

Although Harry suspects that Tonks was in love with Sirius before he died, it turns out she is really in love with Lupin!
6. What is the name of the young witch working at Weasleys' Wizarding Wheezes?

She has short blonde hair and wears the magenta-coloured robes that the staff wear at Weasleys' Wizarding Wheezes.
7. What is the spell used to stop someone from choking?

Slughorn used this spell to save Marcus Belby of the Slug Club from choking on his mouthful of pheasant.
8. What is Amortentia?


Answer: The most powerful love potion in the world

It smells like whatever attracts the person smelling it. In Hermione's case, it smells like freshly mown grass and new parchment!
9. Who confunded Cormac McLaggen so he wouldn't get the keeper position on the Gryffindor Quidditch team?

McLaggen was insulting Ron and Ginny, and has a very quick temper, so Hermione felt it was her duty to Gryffindor House to stop him from making the team.
10. What was the necklace that cursed Katie Bell made of?

Madam Rosmerta, under the Imperius Curse, gave it to her in girls' bathroom at the Three Broomsticks. Katie was supposed to deliver it to Dumbledore, but its package ripped, and Katie was cursed instead.
11. What does Dumbledore set on fire at the orphanage to prove to a young Tom Riddle that he's a wizard?

Dumbledore made the flames disappear as quickly as they had appeared, and the wardrobe was completely undamaged by the fire.
12. What sweet treat did Romilda Vane put a love potion in for Harry?

Ron ended up eating them because he thought they were part of his pile of birthday presents.
13. What is the name of the Death Eater werewolf who bit Remus Lupin when he was very young?

Although Amycus, Alecto and McNair are all Death Eaters, Greyback is the only one who is a werewolf.
14. What is the name of the Weasley family great aunt who has a goblin-made tiara that Fleur may borrow for her wedding?

Ginny makes it quite clear that Ron has a bit of a crush on Auntie Muriel!
15. Who sang at Dumbledore's funeral?

Dumbledore spoke Mermish and conversed with the Merchieftainess on some occasions. For instance, the merpeople told him of Harry's heroic actions during the Triwizard Tournament's under-the-lake second task.
"The music made the hair on Harry's neck stand up...it spoke clearly of loss and of despair..."
Source: Author draco_lover1 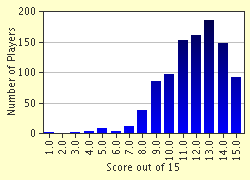 
Other Destinations
Explore Other Quizzes by draco_lover1