This quiz is based on chapters 11 to 20 of 'The Half-Blood Prince', book number 6 in the popular Harry Potter series. Enjoy!

Share on Facebook
Share on Twitter
Share by E-Mail
Author
elvenfair
Time
4 mins
Type
Multiple Choice
Quiz #
216,995
Updated
Dec 03 21
# Qns
10
Difficulty
Average
Avg Score
8 / 10
Plays
8445
Awards
Top 35% Quiz
This quiz has 2 formats: you can play it as a or as shown below.
Scroll down to the bottom for the answer key.

Quiz Answer Key and Fun Facts
1. 'Hermione's Helping Hand': In this chapter, try-outs for Gryffindor Quidditch players take place. As captain of the Quidditch team, Harry has to endure the long and strenuous task of choosing those persons most fit to gain certain positions on the team. Among them is Cormac McLaggen, desperate for the position of Keeper. However, in the end, Ron is chosen as Keeper, having outsaved McLaggen. How many penalty shots out of five did McLaggen save?

Wanting Ron to be Keeper, Hermione confunds McLaggen, causing him to move awkwardly resulting in his missed penalty.
2. 'Silver and Opals': Who nearly dies in this chapter?

Katie Bell, a Gryffindor student, is carrying a mysterious package to someone at Hogwarts from Hogsmeade when her friend Leanne's suspicion is aroused. Leanne demands Katie tells her about the package and eventually tries to grab it from her but Katie jerks it away from her, making contact with the object inside hence experiencing an agonizing phenomenon. Later it is revealed that only a tiny portion of Katie's skin is exposed to the necklace due to a hole in her glove. Had she not had her glove on, she would have died.
3. 'The Secret Riddle': During their first meeting, Dumbledore informs the young Tom Riddle that he is a wizard. Tom is hardly surprised that he himself is capable of magic but suddenly demands to know if Dumbledore is really a wizard. How does Dumbledore prove this?


Answer: He sets a wardrobe on fire

Even as a young boy, Voldemort was already unconsciously practicing Legilimency, the ability to tell whether people are lying by examining their minds. Since he would not have been able to get through to Dumbledore, he demands proof, which Dumbledore gives him.
4. 'Felix Felicis': What potion does Ron drink that helps him perform extraordinarily well in the Quidditch match against Slytherin?

Ron does not actually drink the Felix Felicis but thinks he does; Harry just pretended to slip the potion in Ron's juice. Believing himself to have had the potion, Ron feels lucky and confident, helping him save everything that comes his way in the Quidditch match.
5. 'The Unbreakable Vow': How does Draco Malfoy manage to arrive at Professor Slughorn's party in this chapter?


Answer: He is dragged in by Filch

Draco is caught lurking around an outside corridor and claims to have been invited to the party. When brought before Slughorn however, he confesses to gate crashing, looking quite put off. Snape is angered by Draco's carelessness and converses with him privately, reprimanding him for acting clumsily and foolishly about the incident with Katie Bell.
6. 'A Very Frosty Christmas': "Dumbledore's man through and through, aren't you, Potter?" Who says this?

The Minister of Magic visits the Burrow during the Christmas vacation in order to try to persuade Harry to become friendly with the Ministry, for the sake of image. Harry refuses however, still remembering the Ministry's previous hostile attitude towards him when he told of Voldemort's return.
7. 'A Sluggish memory': Who is convicted for the mysterious murder of the Riddle family?

Voldemort is the one who actually kills his father and family as an act of revenge. He then modifies his uncle's memory so that he confesses to the murder so that Voldemort is never suspected.
8. 'Birthday Surprises': Whom does Ron seemingly fall madly in love with in this chapter?

In this chapter, Ron finally comes of age and is greeted with a pile of presents when he awakes. Among these is a box of chocolate cauldrons which he eats enthusiastically. It turns out, however, that he has eaten the ones intended for Harry to make him fall in love with Romilda Vane. Ron instead becomes obsessed with Romilda and is carried by Harry to Professor Slughorn to be cured.
9. 'Elf-Tails': How does Harry manage to get Peeves to shut up so he can tell Kreacher and Dobby of the task he has for them?


Answer: He uses the Langlocker spell

It finally dawns on Harry how to find out what Malfoy is doing without getting caught - elf tails. He hence gives Kreacher (who has to obey him) and Dobby (who will do whatever Harry asks) the task of following Draco around the clock. Harry asks that they do not contact Draco and do not inform anyone of what they are doing, in order to make the plan as foolproof as possible.

The Langlock spell, which Harry uses on Peeves, shuts him up by causing his tongue to stick to the roof of his mouth.
10. 'Lord Voldemort's request': In this chapter, Dumbledore and Harry are able to explore yet another memory which would help them in the battle against Voldemort. This particular memory is given by an old house elf. What is the name of the elf's mistress?

This particular memory features the young man Voldemort being shown various treasured possessions by an immensely rich lady: Hepzibah. Her death days later left Dumbledore with the conclusion that Voldemort had killed her in order to take her treasures, though Hokey was convicted for the murder.
Source: Author elvenfair

This quiz was reviewed by FunTrivia editor minch before going online.
Any errors found in FunTrivia content are routinely corrected through our feedback system.
Most Recent Scores
Jan 13 2023 : klem2go2: 8/10
Dec 12 2022 : Guest 80: 4/10 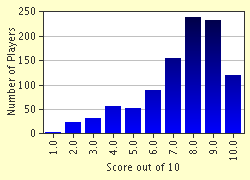 
Other Destinations
Explore Other Quizzes by elvenfair