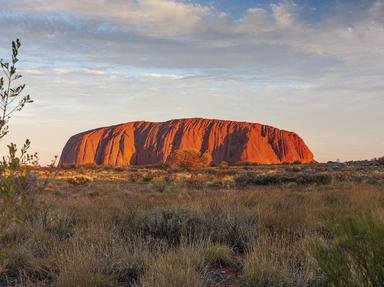 Gidday! In this quiz, I will test your knowledge of the Land Down Under, with one question from each FunTrivia category.

Quiz Answer Key and Fun Facts
1. ANIMALS- Australia has some of the most weird and wonderful creatures on the planet, and also some of the deadliest. Which one of these critters CANNOT cause you to become very ill, or.. shudder.. die, by toxicity alone?

The platypus is Australia's only venomous mammal, and can inflict a nasty injury with its poisonous spurs. These are located on the rear legs of the adult male, and they contain enough toxin to actually kill a dog!

The Reef Stonefish is one of the deadliest animals in the ocean, and is virtually invisible when lying in the reef shallows waiting to be trodden on. Most coastal hospitals now carry an anti-venom, and recorded deaths from stonefish poisoning are nowadays thankfully very rare.

The Sydney funnelweb is a large, aggressive and very toxic arachnid, and can cause death with his bite (the female is much less toxic). Strangely enough, domestic pets such as cats and dogs, are resistant to the poison, but scientists are not sure why.

The Carpet snake, whilst looking rather fearsome, is a member of the python family and not at all venomous, even though it can inflict a rather nasty bite. It can grow to a length of four metres, and is mainly confined to inland Australian areas.
2. BRAIN TEASERS- Of the Australia's six state and two territories' capital cities, only two can be anagrammed into other words. One is Hobart (which becomes the rather obscure 'athrob'), but what is the other city name?

Darwin, the capital of the Northern Territory, can be jumbled up to become 'inward'. Darwin was originally named Palmerston, and was renamed in 1911 in honour of Charles Darwin.
3. CELEBRITIES- Paul Hogan, star of the 'Crocodile Dundee' movies, starred in the very funny 'Paul Hogan Show' before his leap into international stardom. Who was his 'faithful sidekick' in the show?

The 'Paul Hogan Show' started showing in 1973, after Hoges won rave reviews on the talent show, 'New Faces'. John Cornell, who played the twisted-smiled, lifeguard-cap-wearing Strop, was also Hogan's manager. Luigi was a bumbling magician portrayed by Hogan, Tonto was the Lone Ranger's companion, and Skippy was a kangaroo!
4. ENTERTAINMENT- Which long-running radio serial, set in the fictitious town of Tanimbla, featured such luminaries as Gwen Plumb, Queenie Ashton and June Salter?

'Blue Hills' ran for over 27 years on the national radio station, the ABC. A gentle, yet endearing tale of life in a small country town, it lasted for 5,795 episodes. The series' author, Gwen Meredith, was awarded an MBE (Member of the Order of the British Empire), and an OBE (Officer of the Order of the British Empire) for her contributions to Australian radio entertainment.
5. FOR CHILDREN- 'Bananas in Pyjamas' is a very popular show with the kiddies. Many Aussies were brought up with the exploits of B1 and B2 and their friends. Which of these characters are NOT part of the cast?

Thin Arthur was a character on the very irreverent 'Aunty Jack Show'. Gregory and Peck are chooks (chickens), Maggie is a magpie, and Flash is a fish.
6. GENERAL- Australia is the leading producer of opals, with more than ninety percent of the world's output. There are several types of opal, but which type is generally considered the most valuable?

'Black Opal' is somewhat of a misnomer, as the stone is not actually black; it has a darker tone than a white opal. The black variety mainly comes from the northern New South Wales town of Lightning Ridge.
7. GEOGRAPHY- Australia covers three time zones, namely Eastern, Central and Western, but one city in New South Wales actually operates on Central Time. What is that city?

Broken Hill (population approximately 20,000), is in the Far West area of New South Wales, but is much closer to Adelaide than Sydney, and uses the South Australian capital as its main port. At one stage, Broken Hill was the world's leading source of silver, lead and zinc. Mildura is in Victoria and Mt Isa is in western Queensland.
8. HISTORY- Which knighted engineer, scholar and soldier was CIC of the Australian Army Corps in France in 1918? He is remembered by having a University named in his honour.

Sir John Monash was knighted in 1918 for contributions to the Allied war effort. He saw action at Ypres and Messines, and at one stage was commander of the AIF 4th Brigade in Egypt. His reputation as a leader was highly respected, and Field Marshall Montgomery later wrote "I would name Sir John Monash as the best general on the western front in Europe".
On his return to Australia he headed the Victorian State Electricity Commission and was heavily involved with troop repatriation, the Scouting movement and academia. He also has his head on the $100 note.
9. HOBBIES- In 1973, 'Wheels' magazine awarded Car of the Year to which rather controversial vehicle?

Loved by a fanatical few and an object of derision by many, the 'Flying Wedge' was a car years ahead of its time. Totally Australia-made and designed, its radical shape, aluminium alloy V-8 motor (as opposed to the cast-iron blocks of its competitors), extremely light body weight, and many other revolutionary features made it really stand out from the crowd.
10. HUMANITIES (Architecture). One of the most enduring images that the world sees of Australia is the Sydney Opera House. What nationality was the man who designed it?

Jorn Utzon's radical design rocketed the structure into a lot of controversy, and because of the many changes insisted on by the New South Wales government, he resigned from the project in 1966. True to his promise, he has never returned to see his masterpiece, in person. Considered a bit of a white elephant at the time, the Opera House was partially funded by State-run lotteries.

The multi-sailed building was officially opened by Queen Elizabeth in 1973, and together with the nearby Harbour Bridge, frames a wonderful view of Sydney Harbour.
11. LITERATURE- Author Patrick White won the Nobel Prize for Literature in 1973, for a book based on the life and death of explorer Ludwig Leichhardt. What is the name of the book?

Leichhardt was not a good bushman, and died in 1848 trying to cross Australia from east to west; the hero of White's book suffered the same fate. Another of White's books, 'A Fringe of Leaves' tells the story of Eliza Frazer's life with the aborigines. 'Kangaroo' was written by Englishman, D.H. Lawrence, and 'Weird Mob', by John O'Grady, is a comical view of Australian life as seen through the eyes of an Italian post-WWII immigrant.
12. MOVIES- What 1976 Australian movie was set against the backdrop of the 1969 federal election?

A tale of drunkenness and sexual shenanigans mixed with politics, 'Don's Party' was written by David Williamson and directed by Bruce Beresford. The movie starred Graham Kennedy, Graham Blundell, Jeannie Drynan and Ray Barrett with a cameo appearance by the Prime Minister, John Gorton.
13. MUSIC- Which long-serving group took its name from a body of water between Melbourne and Geelong, in Victoria?

The original lineup consisted of some of the biggest names in Australian music in 1975, including Glenn Shorrock, Graham Goble and Beeb Birtles. Australian legend John Farnham spent a couple of years in the band in the mid-eighties. Shorrock and Birtles saw the signpost to the small township and adopted it as their new name.
14. PEOPLE (Criminals)- Who was the last person hanged in Australia?

Ryan was a small-time criminal who was serving a sentence for break-and-enter and firearms offences. In 1965, he and Peter Walker escaped from Pentridge Prison in Melbourne, and prison guard George Hodson was killed during the escape attempt. Investigations carried out some years later cast doubt as to whether Ryan actually fired the shot that killed the guard, and mass demonstrations and pleas from prominent clergy and politicians against his death sentence took place around the country. They were all to no avail, and he was executed in 1967.

Capital punishment was abolished in Australia shortly afterwards.
15. RELIGION- Mary MacKillop was beatified in 1995 by Pope John Paul II, and became Australia's first saint in 2010. She was responsible for starting a series of Catholic schools throughout South Australia, which eventually covered most of the country. What is the name of the order that she founded that helped launch these schools?


Answer: Sisters of Saint Joseph of the Sacred Heart

The sisters are known as 'Brown Joeys', and have dioceses throughout Australia, New Zealand, Ireland and Peru. Mary's miracle (a prerequisite for sainthood) was the curing a woman of leukaemia in 1975.
I sincerely hope that you did NOT choose St Kilda- they are the team I support in the Australian Football League!
16. SCIENCE and TECHNOLOGY. Which dinosaur is named after a Queensland town?

Muttaburrasaurus was a large plant-eating reptile, named after Muttaburra; Minmi paravertebra was another plant eater with heavy protective body armour, who was discovered near Minmi Crossing in southern central Queensland. Richmond Pliosaur was a a large marine animal that inhabited the inland sea that used to exist near Richmond, north Queensland.
17. SPORTS. When the Olympics came to Australia in 1956, where were the equestrian events held?

Melbourne won the rights to stage the 'Friendly Games' by one vote, over Buenos Aires, thus becoming the first city south of the equator to hold the Games.
Because of the very strict quarantine on livestock coming into the country, the horses involved would have been in isolation for over six months. This was not a satisfactory arrangement for the riders, the Melbourne organising committee OR the horses, so the IOC decided that the events would be held in Stockholm, five months prior to the rest of the Games.
18. TELEVISION- When Australia's "Wheel of Fortune" appeared on television in 1981, who was the host?

Sigley's co-host and letter-turner extraordinaire was the lovely Adriana Xenides, who set the world record as the longest serving game show hostess ever (18 years!).

The show was first launched way back in 1959 where it was hosted by Reg Grundy, who went on to head the enormously successful Grundy Television Enterprises.
The original concept for "Wheel" actually came from a radio show of the same name.
19. VIDEO GAMES- Which Australian-made, hugely popular RTS video game was first unleashed upon the world in 1997?

Subtitled "The Future of War", the game was released by Brisbane-based company Auran, and pits the Imperium and Freedom Guard against each other.
20. WORLD- Politics- On November 11, 1975, Australia had a major constitutional crisis, with the Governor-General dismissing the Prime Minister, Gough Whitlam. A very famous photo was taken on the steps of Parliament House, with a man reading out the dismissal notice, a grim-faced Whitlam standing behind him. Who was the man who delivered that fateful notice of dismissal?

Turbulent times indeed! Because Whitlam's Labor Party did not have control of the Senate, Opposition Leader Fraser used the blocking of the Supply Bill as an excuse to approach Kerr, the Governor-General, to dismiss the Government. Barwick agreed that the move was legal, and the deed was done. Who can ever forget Gough's later pronouncement "Well may we say God save the Queen, because nothing will save the Governor-General."? For many years, disgruntled Labor supporters referred to the new Prime Minister, Malcolm Fraser, as 'Kerr's Cur'.
Source: Author ozzz2002 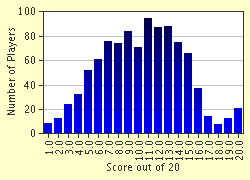 I love my country and love sharing it with the world. Here are some quizzes on various aspects of life Down Under.