Wherever she goes, Darth Revan just can't get away from those pesky commercials! The invasive advertising world seems to follow her. While you are quizzed on some general ad-related trivia, Darth Revan will attempt to find peace and quiet.

Quiz Answer Key and Fun Facts
1. In the beginning, many years before Darth Revan was even born, there were no TV commercials. Then, in 1941, the watchmaking company Bulova became the first to officially advertise on television, an effort that cost them only a few dollars. What "all-American" sports game was broadcast after this 10-second commercial, a match between the Brooklyn Dodgers and the Philadelphia Phillies?

"America runs on Bulova time" - according to the first FCC-authorized television commercial, which aired on NBC before the baseball game (which, by the way, the Phillies won, 6-4). The voice-over accompanied an image of a clock and a U.S. map. The Bulova watch company began in 1875, with Joseph Bulova's small New York City jewelry store.
2. Darth Revan was rather fond of TV, but commercials were the bane of her existence. Having just watched some TV, Darth Revan felt strangely compelled go and buy this fancy new hair product - it'll make her look like a model! (Yeah, right...) The ad must have sent her subliminal messages. What lemon-lime soft drink, manufactured by the Coca-Cola company, urged viewers to "obey their thirst" and used a "sublymonal" advertising campaign?

Subliminal messages, hidden in media such as commercials, are intended to reach out to a viewer's subconscious and affect their thought processes or actions without their being aware of it. Sprite's sublymonal ("lymon" = lemon + lime) advertising parodies such methods by clearly telling the viewer of the commercial's hidden messages, making them the opposite of actual subliminal advertisements. "Welcome to SubLYMONal advertising. For best results, do not blink."
3. "Snap, crackle, pop, Rice Krispies" ... "Meow meow meow meow Meow meow meow meow" ... "What would you do-oo-oo, for a Klondike bar?" Like it or not, Darth Revan had to admit that a few of these annoying commercials are accompanied by some pretty catchy tunes. What word refers specifically to a song written for advertising purposes?

The catchy jingles of a popular FreeCreditReport.com ad series will probably either get you singing along, or stick in your head and annoy you. The Free Credit Report guy (actor Eric Violette, though his voice was dubbed) is stuck buying a very uncool "used subcompact" car, lives in his in-laws' basement, and has to dress like a pirate at his place of employment, where he sells fish "to tourists in T-shirts" - all because of failing to check his credit report, and that of his "dream girl." An easter egg of sorts, a pirate hat is supposedly hidden in each of the commercials.
4. It was finally time to take control of television: enough of these annoying commercials! Darth Revan wanted to decide what she watched and when she watched it, and to hold the power to skip through advertisements at will. So, she invested in a Digital Video Recorder (aka, DVR). What popular brand of DVR, one of the first, became available in 1999?

TiVo's DVR is an interactive television system that lets you record your favorite shows, search for programs you might enjoy, and best of all, avoid those annoying commercials! The company was challenged by Mike Ramsay (who designed TiVo with Jim Barton) to ship the first DVR ahead of schedule, on March 31st. Since that month was graced with a rare blue moon (the second full moon in a month), the successful project and subsequent annual "TiVo holiday" on the last Friday in March bear the name Blue Moon.
5. Finding no escape on television from the relentless commercials (her DVR wouldn't arrive for some time), Darth Revan put her favorite DVD into the player - surely no commercials there, right? "The following preview has been approved for all audiences." Ugh, fast forward! Movie previews, like those shown at a theater or on a DVD before the feature presentation, are called what?

As the term indicates, trailers were originally shown after a film, a teaser to entice patrons to return for the next showing. Now, though, trailers precede the feature presentation. In a mere two and a half minutes (the maximum time for a theatrical trailer), a well constructed video comprised of excerpts taken from the best and most exciting scenes, combined with a riveting soundtrack, can whet a movie-goer's appetite for more.
6. You'd think Darth Revan had finally found a respite in her DVD, but then all the characters started drinking Dr Pepper, eating at Burger King, and using Dell electronics. It's called product placement, a common and often successful form of advertising. What movie's use of product placement led to a revived interest in Mr. Potato Head and other classic playthings?

Disney-Pixar's "Toy Story" (1995), starring the characters Sheriff Woody and Buzz Lightyear (voiced by Tom Hanks and Tim Allen, respectively), was the first film to be completely animated with computer generated imagery, revolutionizing the industry. Following their roles on "Toy Story," the careers of Mr. Potato Head, Slinky, and Etch-a-Sketch were revived and the classic toys experienced a surge in sales.

In 1999, the successful film spawned a sequel called "Toy Story 2."
7. Darth Revan next turned to her computer and the Internet. Unfortunately, the Web is a heavily commercial-infected place. While trying to check out her favorite websites, Darth Revan felt like she was playing a video game! It became a race to close all the browser windows that came up on her screen, advertising various sites and products. What are these obnoxious windows called, also part of the name of an informative VH1 television series?

VH1's series "Pop-Up Video" (originally airing 1996-2002) usually played five music videos per episode, and during the videos, "info nuggets" resembling bubbles would pop-up on the screen. On the World Wide Web, pop-ups (and their evil twins, pop-unders) are annoying advertisements that open in a new browser window when you're surfing the 'Net, either on top of or underneath your active window. Though there are many kinds of pop-up blocking software available, some ads will inevitably penetrate your defenses.
8. You've got mail! Darth Revan was greeted with an inbox full of electronic messages. But, knowing that she is not so popular as to warrant that many e-mails, she checked the subject lines and saw that most of them were urging her to buy illicit drugs, get out of debt, and earn millions working from home. Such unsolicited junk e-mails share a name with what much-maligned Hormel meat product?

The first can coming off the line in 1937, the affordability and convenience of Hormel's Spam (lunch meat made of 100% pork and ham) made it a favorite during World War II. A staple for soldiers during the war, the troops received 15 million cans of "The Miracle Meat of a Million Uses" each week.

The word "spam" came to refer to mass-mailings after a "Monty Python" skit, in which the word was annoyingly said almost 100 times in three minutes - sort of like the annoying junk mail crammed into someone's inbox!
9. Desperately attempting to escape the annoying commercials, Darth Revan hopped in her car and went to the local McDonald's for a bite to eat (yes, she *might* have been influenced by that Big Mac ad, earlier...but hey, she was hungry anyway!). On the way, she crossed paths with a large, roadside billboard. You can thus determine that Darth Revan does not reside in what 49th U.S. state, where billboards are banned?

Purchased from Russia in 1867 and derisively called Seward's Folly (Secretary of State William H. Seward having facilitated the purchase), Alaska achieved U.S. statehood on January 3, 1959. The 49th state, it would be followed by Hawaii's admission to the Union later that year.

The beautiful scenery of both Alaska and Hawaii, as well as Maine and Vermont, remain unspoiled by intrusive billboards.
10. In the end, The Enemy, that inescapable advertising world, simply couldn't be defeated. So if you can't beat 'em, join 'em! In a bizarre turn of events, Darth Revan made a career change and became an advertising executive, in search of the perfect commercial. Goal achieved, she was honored with what advertising award, named for a Greek muse?

Named for the Greek muse of history and first awarded in 1959, the Clio Awards are given in recognition of exceptional advertising design. Innovation and creativity in various mediums of advertising, as well as the achievements of specific individuals, are honored by the Clio Awards. Statues of gold, silver, and bronze are presented to the winners.
Source: Author darthrevan89 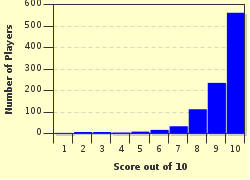 Related Quizzes
This quiz is part of series Commission #3:

Our third Commission, launching in late August 2009, asked our authors to get involved, putting themselves in the titles with something else of another author's choosing. Let's just say they didn't make it easy!


1. Eburge and the Aliens Average
2. StarStruck and The Fantastic Granny Average
3. Kyle and the Blue Box Average
4. Jonnowales and the Damaged Dry Cleaning Average
5. Darth Revan and the Annoying Commercials Very Easy
6. The Hibernating Fish Average
7. Salami and the Jaws of Defeat Easier
8. PDAZ and the Mysterious Mandrake Average
9. Bucknallbabe and the Journey of a Lifetime Average
10. Deputygary and the Terrifying Tour Guide Easier
11. BxBarracuda and the Chalice of Malice Average
12. Snowman and the Half-Peeled Quince Average


Other Destinations
Explore Other Quizzes by darthrevan89