Identify some of the unique places and events of England. Some require more than a perfunctory knowledge of England, but I've tried to help with some hints in the question.

Quiz Answer Key and Fun Facts
1. England and Australia play what is generally a five-match cricket series. By what name is this series generally known?

Although it might seem more fitting to award a trophy in honor of a famous Australian or English players (such as Donald Bradman or W G Grace), the match became known as the Ashes. The name originates from a satirical obituary after England were beaten by the Australians in 1882. The article claimed that English cricket had died, was cremated, and the ashes were being returned to Australia.

The country that wins the most matches retains the Ashes. If each team has won the same number of games, the current holder retains the title. A draw occurs in a cricket match if the trailing team has not completed two complete innings within the five day match - which is generally owing to delays caused by bad weather or lengthy play.
2. One of the items on my bucket list is to visit Poet's Corner. Where would I go to see this place?

English churches have a tradition of providing burial places and memorials to benefactors and noted personages. Geoffrey Chaucer was the original literary figure buried in the south transept of Westminster Abbey and the tradition started to inter or place memorials to other poets and authors in the same area.

The British Library is an outgrowth of the British Museum that contains many significant illuminated manuscripts, early print books, musical compositions, and other literary items. Two of the four extant copies of the Magna Carta are displayed here. (The other two are at Lincoln and Salisbury).

Highgate Cemetery is a noteworthy cemetery in North London, while the Radcliffe Camera houses the science library of Oxford University.
3. The bones of Richard III were discovered in 2015 buried under a parking lot near his last battle at Bosworth. In what city were his bones found?

(Groaner alert) It's ironic that Richard III ("my kingdom for a horse") was found beneath a car park.
4. In 1926 a famous female mystery writer saw her marriage fail, causing her to enter a period of severe depression. She disappeared for eleven days and many thought she had committed suicide. A nationwide search ensued and she was finally found at the Swan Hotel in the small North Yorkshire spa town of Harrogate. Who was this writer?

One critic found an interesting analogy of the recent book/movie 'Gone Girl' with Agatha Christie's real life situation. Christie's marriage to Archibald Christie, a debonair war hero, had come asunder with his affair. She disappeared either during a fit of depression or to punish and expose his unfaithfulness.

Sayers and Tey were mystery writer contemporaries of Christie. Tey was somewhat of a recluse herself and Sayers later abandoned mystery writing to focus on religious works. James is also a mystery writer, but in a later generation.
5. In November, towns and cities throughout England build bonfires of waste material on what is sometimes referred to as "Bonfire Night", although another term is also used. What is the origin of Bonfire Night?


Answer: Celebrate the foiling of the Gunpowder Plot

Guy Fawkes was one of the key participants in the Gunpowder Plot to blow up the Houses of Parliament building, and "Guy Fawkes Day" is celebrated on November 5 in honor of the day he was captured. An effigy of Fawkes is traditionally burned in the bonfire, accompanied by the letting off of fireworks.
6. Some London homes display a blue plaque on the outside of the home. What is the meaning of the blue plaque?


Answer: A famous person once lived there

The blue plaques, which are also used in other parts of England, are now managed by English Heritage. Over 900 blue plaques are located on buildings around London, and a formal process exists for adding plaques.
7. One of the most famous horse racing events in England is the Grand National Steeplechase held at a racetrack near Liverpool. What is the name of the track?

Liverpool is located in the north-west of England. Ascot is located in Berkshire, near Windsor Castle, Epsom Downs is in Surrey, and Newmarket is in Suffolk - all quite a long way from Liverpool.

The Grand National Steeplechase is over 4 and 1/4 miles long, requiring jumps over 16 fences - some of which are 5 feet tall. At times over 40 horses compete in the race, making it a gruelling and dangerous race. Probably the most famous horse associated with the race was Red Rum, who won it three times and was second twice.
8. A famous statue near the Westminster Palace (House of Parliament building) shows an English queen going into battle on a chariot against invaders. What is the name of the queen?

Queen Anne has a statue in front of St Paul's Cathedral and Queen Victoria has one in front of Buckingham Palace. Queen Boadicea's statue is at the north end of Westminster Bridge, overlooking the Houses of Parliament.

She was the wife of the leader of the Iceni tribe, who was an ally of the Romans. When her husband died, the Romans ignored his desire for Boadicea to succeed him. They seized the land, flogged Boadicea, and raped her two daughters. She raised an army and drove the Romans out of London. The Romans considered withdrawing from Britain, but eventually counter-attacked and defeated her through superior weaponry and training.
9. This Yorkshire city was once England's primary centre for steel production. If you don't know the answer off the top of your head, you might remember that the decline of British steel manufacturing was an issue in a popular 1997 movie. What is the city?

The movie "The Full Monty" told the story of several men in Sheffield who had lost their jobs and started an exhibitionist male dance troupe. Four of the men had been laid off from their steel manufacturing jobs.

The German bombing of England in WWII was not confined to London. Sheffield and other production centres in the Midlands and north (Coventry, Leeds, Middlesbrough, Manchester, and Liverpool) suffered regular attacks aimed to knock out war production. If you visit Coventry, you can see the new cathedral built next to the bombed-out ruins of the old one.
10. Residents of which large English city are often called "Geordies"?

"Geordie" actually refers to the dialect used in the Tyneside area (Newcastle and its surrounding regions). Other dialectical regions include Scouse (Liverpool), Mancunian (Manchester), Tyke (North Yorkshire), and Cumbrian. "Geordie" once carried a connotation of a lower class worker or coal miner.

There is some dispute over the origin of the term Geordie. Some believe it is based on the extensive use of the name George in the region, especially for Coal miners. Other believe it's based on the preference of the miners for Geordie lamps (made by George Stephenson).
Source: Author SixShutouts66 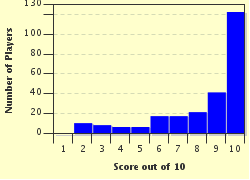 Related Quizzes
1. Station Mastermind Very Easy
2. Named After English Counties Average
3. Ye Olde English Gift Shoppe Average
4. In an English Country Garden Very Easy
5. An English Potpourri Average
6. My English Homes Average
7. An English Miscellany Average
8. England, by Category Average
9. Oh I Do Like To Be Beside The Seaside... Average
10. English Regional Nicknames Tough
11. Who What Where When and Wye Average
12. Anglomania Average


Other Destinations
Explore Other Quizzes by SixShutouts66