Welcome to my old world gift shop filled with memorabilia and keepsakes from good old Blighty. Have a slow browse around the souvenirs as you answer this eclectic range of English trivia.

Quiz Answer Key and Fun Facts
1. The first gift I consider purchasing is a Union Jack umbrella because I know the British weather can be so temperamental. Which of these is NOT a slang word used by the Brits to describe their climate?

British weather is notoriously changeable which is maybe why we like to discuss it so much. The gulf stream makes our temperatures mild with the addition of moisture in the air because we live on an island nation surrounded by sea. We also receive sudden bursts of a cold front coming across from Siberia or the occasional smattering of a Saharan dust storm traveling 2,000 miles from North Africa. This adds up to a mish-mash of different weather conditions, although not all at once I hasten to add.
2. Which company first introduced the iconic red bus seen driving around the busy bustling streets of London?

During the early 20th century, horse-drawn bus operators in London were in stiff competition with each other, all vying to to win over the most customers. All the buses came in different colours until the well established London General Omnibus Company came up with the idea of painting their buses bright red to be easily recognised. They soon became the largest bus company with their distinctive logo and livery. Over time, the company name shortened to London Transport, and transferred to Transport for London in 2000. Transport for London today oversees all transport links across London including train, tube, bus, trams, Docklands Light Railway and Thames river services. The bus service alone caters to over 2.4 billion passenger journeys each year.

The red colour on London buses is Pantone 485 C which is the same shade used on the branding for McDonald's, Kit Kat, Royal Mail post boxes and phone boxes, and also the Russian flag.
3. Brighton is the most popular destination outside of London for visiting tourists. Which of these attractions, designed by the same people who created the London Eye, opened in 2016?

"London Eye team goes pole dancing at the seaside" was a headline in one of the national daily newspapers on the opening of the British Airways funded i360, or Brighton Eye as it is sometimes called. Locals who opposed the design called it the "iSore". The tower was built at the site of the old West Pier which suffered a major fire in 2003. i360 is 162 metres tall and has a doughnut-shaped observation tower which turns 360 degrees as it gently elevates up and down, giving far reaching views along 42 km of East Sussex coastline. When it opened in 2016, the structure became the world's tallest moving observation tower.

Brighton welcomes over eight million visitors each year and the most popular destination is Brighton Pier which is just along from the i360. Brighton Palace Pier, as it is officially called, first opened to the public in 1899. The pleasure pier became popular with Victorians escaping London city life for the weekend. The 524 metre long pier made from iron has 136 km of timber planking and 67,000 illumination lights.
4. I am tired after visiting many gift shops and so I stop in a tearoom for light refreshments. Which of these sweet treats would I traditionally get served in Bath, Somerset?

Each corner of England has a traditional cake or biscuit served alongside a pot of tea in their tearooms, all dependent on which county you are visiting. The most famous of them all is Devon cream tea served in the West country and elsewhere. You can also sample parkin from Yorkshire, Eccles cake from Manchester, flips from Lancashire, fairings from Cornwall, Bakewell tart from Derbyshire, and lardy cake from the home counties.

The Sally Lunn Eating House is the name of a famous tearoom in Bath which opened in 1937 to serve tea and Sally Lunn buns. The bun is a sweet bread roll very similar to a French brioche, and named after a 17th century French refugee named Sally Lunn.
5. It is easy to buy a miniature souvenir blue plaque which normally adorn the many English houses to commemorate famous or notable people who lived there. The first plaque was unveiled in 1867 for which prominent figure, famous for writing his epic poem about "Don Juan"?

Most houses in England are unimposing and it is only when you see a blue plaque on the outside wall that the house and its history suddenly comes to life. You may walk past an ordinary mock-Tudor block of flats in London and then suddenly notice a blue plaque on the wall which reads "Amy Johnson 1903-1941 aviator lived here". An ordinary suburban house in Bromley has a blue plaque which reads "Enid Blyton 1897-1968 popular writer of over 600 books for children", or the terraced house tucked into a street corner in Lambeth where a comic genius once resided, "Charlie Chaplin 1889-1977 film maker and Water Rat lived here 1898-1899". These distinctive plaques also commemorate lesser known, although equally as important people, such as the London Georgian townhouse where "Luke Howard 1772-1864 namer of clouds lived and died here". Thanks to him we have words such as cumulus, cirrus and nimbostratus in our vocabulary.

The Blue Plaque scheme, which is now run by English Heritage, was instigated by William Ewart MP in 1863. The first plaque was unveiled four years later outside 24 Holles Street, Cavendish Square, to commemorate the birthplace of poet, Lord Byron. The building has since been demolished. Today there are over 850 blue plaques in London along with more nationwide.
6. Many uniformed men in London are seen at tourist hotspots in their ceremonial red livery, but which of their organisations dates back the furthest?

The Coldstream Guards (1650) and the Grenadier Guards (1656) are just two of the British army regiments often seen parading outside Buckingham Palace and Windsor Castle wearing their smart red uniforms and tall black bearskin hats. The Chelsea Pensioners (1682) also wear distinctive red uniforms. The 300 men and women are all former serving British army veterans who live at the Royal Hospital Chelsea, the location which is venue to the world famous annual flower show.

The Beefeaters, or Yeoman Warders, were established much earlier, in 1485. In 1509, the newly crowned King Henry VIII moved his royal residence from the Tower of London and placed a minimal number of sentries outside to guard the tower. These men were reported to be "given to drunkenness, disorders and quarrels". Their nickname was allegedly given because they were paid part of their salary in beef. The warders today are much more honourable. With their red, gold and black livery, these former serving army officers give guided tours and proudly stand guard over the crown jewels.
7. The next time I visit Blackpool, I intend to buy a stick of rock with letters inside which spell out the name of the seaside resort. Who was credited with inventing this piece of confectionery?

Bassett's, Cadbury's and Fry's are all household names in English confectionery, but it was little known Ben Bullock who created a national favourite. Ben Bullock was a former coal miner from Yorkshire and he came up with his invention in 1887 after visiting Blackpool on holiday. He returned to Blackpool with his new sweet and it was well received. Another confectioner called Dynamite Dick started a similar factory soon afterwards in neighbouring Morecambe. The new trend gained popularity in other seaside resorts including Brighton, Bournemouth and Great Yarmouth. Seaside rock is still popular today and can be bought in most tourist locations.

Craftsmen hand-make rock, with the aid of industrial machines, by boiling sugar and glucose together until it is a pliable mass. Coloured letters are shaped individually and then added to the mass which is stretched into long tube shapes before cutting. It sounds simple, but it is an old fashioned trade which can take ten years to master properly.
8. Next on my list is a gift to remind me about how stoical the English can be in keeping their stiff upper lip. What was the name of the original poster used during World War Two to raise morale of the British public?


Answer: Keep calm and carry on

During World War Two, the Ministry of Information was created to oversee propaganda and publicity. They came up with three poster designs, all with the Tudor Crown insignia, to encourage the morale of the British people. The first two were used on hoardings, buses and many other public locations. These read "Your courage, your cheerfulness, your resolution will bring us victory" (black background) and "Freedom is in peril" (green background). The third was to be used in the eventuality that Britain was invaded by Germany. Since this never happened, the poster "Keep calm and carry on" (red background) was never seen by the public.

Sixty years later, a bookkeeper from Northumberland stumbled across an original poster in a box of used books he had bought at auction. He began to sell copies which proved to be popular. The nostalgic design is now mass produced and can be found on many souvenirs including mugs and tea towels.
9. My next trip takes me to the dreaming spires within the city of Oxford. What type of gift would I purchase if I visited the Old Sheep Shop in St Aldate's?

Alice's Shop, or the Old Sheep Shop, is a small shop tucked between two much larger buildings in St Aldate's, just down the road from Christ's College in Oxford. It was once a grocery store frequented by a young girl and her sisters who together would often visit and buy sweets. The girl was Alice Liddell, the inspiration behind "Alice in Wonderland" by Lewis Carroll. The store featured in "Through the Looking Glass" where Alice visited and was confronted by a sheep who was knitting in an armchair. "Well, this is the very queerest shop I ever saw!", said Alice in amazement.

Since the 1960s, the store has been a treasure chest of Alice memorabilia and gifts, ranging from fabrics, to ornaments, and from jewellery to framed prints.
10. I found this small metal diecast Vespa scooter in an antique shop off Carnaby Street in London. It reminded me of which British subculture of the 1960s featuring young men who favoured wearing parka jackets with sewn on fabric badges?

The "war" between the two British subcultures of the 1960s has been much publicised through news articles, books and film. Violence erupted at seaside resorts, especially Brighton, where gangs would descend in their hoards to turn quiet holiday resorts into a major battlefield.

The Rockers were in their 20s and 30s and were brought up during the Teddy Boy culture a decade earlier. They were identified by their scruffy black leather biker jackets, jeans, pompadour hairstyle and could be seen riding their motorbikes. Their idol was Elvis Presley.

Mods on the other hand were much younger and smarter. They listened to modern soul and jazz music, hence their name. They had short hair, khaki parka jackets to keep their suits clean, and rode Italian Lambretta or Vespa scooters. They favoured wearing metal pins and fabric badges on their coats, with images of the Union Jack, chevrons and shooting targets.
Source: Author Plodd 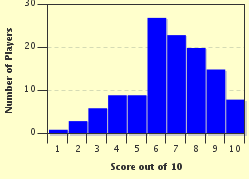 Related Quizzes
1. Station Mastermind Very Easy
2. Named After English Counties Average
3. In an English Country Garden Very Easy
4. An English Potpourri Average
5. England: Places, People, and Customs Easier
6. My English Homes Easier
7. An English Miscellany Average
8. England, by Category Average
9. Oh I Do Like To Be Beside The Seaside... Average
10. English Regional Nicknames Tough
11. Who What Where When and Wye Average
12. Anglomania Average