Take an easy stroll around a typical English country garden. Great quiz for those living abroad, 100 points for desperate point chasers in England!

Quiz Answer Key and Fun Facts
1. The first stop in my garden is at some trees with a green fruit on them that can turn red towards September and then fall if not picked. The English often wrap pastry around them and bake them into dumplings. Which fruit is this?

Apple orchards and apple trees are very much a part of the English countryside. Although they are usually very cheap in the shops nowadays the English did develop a habit of bottling them (boiled and stored in sealed jars) to provide a steady supply throughout the winter and into the following August.
2. Next on my journey are some flowers on a thorny bush that are typical of any country garden in this part of the world. This flower gave its name to wars in England between 1455 and 1485. Which flower is it?

The English rose is the typical garden flower of the country. The Wars of the Roses were fought between the House of York and the House of Lancaster. They were named after they took place because of the alleged symbols of red and white roses for the Houses of Lancaster and York respectively.
3. My next stop is a thorny bush that produces a green fruit that goes well boiled with sugar. As a kid I remember the famous myth that it was under these trees that babies are born. Which fruit is this?

The gooseberry tree thrives in the average English climate and its fruit makes excellent pies when boiled with sugar. This is another fruit that the English developed for bottling and storage.
4. Over in the corner of the garden is a tree with a long leaf with sharp points on it. It grows all the year round (it's evergreen) and is much used in Christmas decorations. It can have flowers and red berries. What tree is it?

Holly trees are very hardy growths and fight back strongly even if cut back. When the snow falls their leaves covered in white create the characteristic Christmas card scene.
5. Now down in the lower garden are plants that you can eat. They have large green leaves and thick stems that are green and go red as they ripen. These stems are delicious when boiled in sugar. Actors use the name of this plant to simulate conversation. What is this?

Another fairly hardy plant that is often eaten from homegrown.
6. This next flower comes to bloom in about March or April. It usually has a pale yellow flower like a bell. It is fairly hardy and will fight its way through snow on the ground. It is an alternative to the leek as the Welsh national emblem and has also been called the Lent Lily. Which flower is this?

The daffodil creates a typical spring scene in this part of the world. Easy to grow (but beware of squirrels stealing the bulbs) and very colourful at a time in the year when other plants are often still waiting to germinate.
7. This tiny little flower also fights its way through the cold and snow in the spring. It grows from a bulb that seems to double into two plants the following year and thereafter. Small little bells amid a lot of long green leaves. Which flower is this?

Often blue, but certainly can be white, they are very hardy and multiply year by year with very little attention.
8. Now what is this weed with a long thin green stalk and a surprisingly colourful yellow flower at the head of the stalk. How ever much you cut it back, unless you get the roots out it seems to come back throughout the summer. Wine can be made from this plant. What plant is this weed?

The dandelion will always seem to appear unless the astute gardener is ever alert to dig it out. It does make wine and looking at it one wonders where you draw the borderline between a flower and a weed? Is it their ability to grow untendered and unsown that makes them a weed, or is it a cultural assumption that we call it a weed?
9. Over there is a tree that has fruit which also mature in late summer. It's a fleshy fruit tapering towards the stalk and is usually green. What fruit is this?

Apples and pears are the two fruit trees you're most likely to find in the English garden. Homegrown pears can be used and eaten in much the same way as apples.
10. These prickly rambler bushes have a red berry that is quite sweet and can be eaten off the bush. What is it?

Raspberries and blackberries are common and are also very hardy and will spread. If not maintained properly they may well run wild, so beware.
Source: Author rialto88 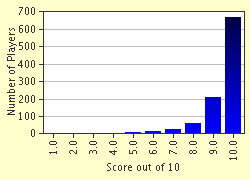 
Other Destinations
Explore Other Quizzes by rialto88