Inspired by Ozzz2002's "Australia, by Category" and the "Canada, by Category" from Agony, here is my attempt on England, my home country. There are twenty questions, one for each FunTrivia category.

Quiz Answer Key and Fun Facts
1. ANIMALS: The "Royal Arms of England" consists of a red shield with three golden animals. Which animal?

The three lions are also depicted on royal banners. Although there is some confusion in heraldry between lions and leopards, the English animals are lions stretched out with one paw in the air.
2. BRAINTEASERS (Wordwise): Say what you see. GHBIRMAM

Gary Oldman is considered one of the greatest actors of the late 20th and early 21st centuries. He slips into roles so easily. As Sirius Black he manages to be the father figure with the edge of danger and madness. His performance as Commissioner Gordon is the perfect family man fighting the forces of evil. Yes, I am a huge fan!
4. ENTERTAINMENT: Liverpool has produced many entertainers over the years, including sportsmen and women, musicians, actors and comedians. Which of the following did NOT come from Liverpool?

Matt Monro (1930 to 1985), known as "The Man with the Golden Voice", was born in London, England. Frank Sinatra was one of his very prominent admirers. Matt Monro's voice can be heard in many films, on many CDs and is often played on the radio.
5. FOR CHILDREN: "The Teletubbies" for pre-school children was a hit with all ages. Which of these characters is the odd one out? (Do you need a clue? Think blue.)

Noo-noo was a magical vacuum cleaner and friend of "The Teletubbies", forever cleaning up their spilled toast and custard. Po is the missing Teletubby.
6. GENERAL KNOWLEDGE: The following poem about England was NOT written by an Englishman. "Oh, to be in England now that April 's there And whoever wakes in England sees, some morning, unaware, That the lowest boughs and the brushwood sheaf Round the elm-tree bole are in tiny leaf, While the chaffinch sings on the orchard bough In England-now!"

Of course it was!

"Home Thoughts from Abroad" was written by Robert Browning (1812 to 1889). He travelled extensively and died in Italy in his son's home. He returned home to his England to be buried in the Poets' Corner in Westminster Abbey.
7. GEOGRAPHY: London is the capital city of England. On which river is it located?

The River Thames is the longest river wholly in England. The Severn is longer, but it sneaks into Wales. Henley, Staines, Southend and Walton are just a few of the other towns on the river.
8. HISTORY: What happened in the capital of England in 1666, which is a fact that all English schoolchildren are taught?

The 1660s were a very busy time with the monarchy restored in 1660, the plague in 1665 and the Great Fire of London in 1666. As a child, I was taught that the fire helped clean the plague from the streets of London, however there is disagreement among historians about this.
9. HOBBIES: Which of the following is a traditional English Sunday meal?

Although not as popular as it once was, Sunday is the traditional day to have a roast dinner. Red squirrels have started to appear again throughout England, but have never been a traditional meat. Fish and chips with mushy peas are very English, but not on a Sunday as Sunday Trading Laws prevented their sale until the late twentieth century in many places. Strawberries and cream are delicious, but not a traditional Sunday meal.
10. HUMANITIES: Which Andrew Lloyd Webber musical opened in London's West End in 1981?

The musical "Cats" opened in the West End in 1981 and on Broadway a year later. I was lucky enough to see the show near to the beginning of its twenty-one year run. It was an enchanting show from start to finish, and was far too short an evening.

"Joseph and the Amazing Technicolour Dreamcoat" opened in 1968. "Aspects of Love" opened in 1989. "The Beautiful Game" opened in 2000.
11. LITERATURE: I have read the science fiction work "The House on the Strand", one of the later works of which English author, most known for romances with a twist?

"The House on the Strand" is set in Cornwall, England, as are many of the works of Daphne du Maurier. The novel follows the steps of a young man who slips between his present in the 20th century and the past of the 14th century. The drug that he uses is addictive and dangerous. It is a great read.

Daphne du Maurier (1907 to 1989) loved Cornwall and wrote of it so beautifully in many of her books. Two titles known to many, both through reading them as well as their transitions to the big screen, are "Rebecca" and "Jamaica Inn".
12. MOVIES: Which 1969 drama film was a hit in England, but failed in USA due to the Yorkshire accents?

The film follows 15-year-old no-hoper Billy Casper, played by David Bradley, as he takes a baby kestrel (the "Kes" of the title) from his nest and raises him. As Billy learned about falconry, he found a purpose in his awful life and started to change for the better.

Although I have seen the film several times, the ending makes me sob my heart out every time.

When the DVD was released, some scenes were removed and the accents over-dubbed to be easier on the ear.
13. MUSIC: England has produced many fine musicians over the years, but which singer is internationally famous for his performance as Jean Valjean in "Les Misérables", including the 25th Anniversary Concert?

Alfred Giovanni Roncalli Boe, to give him his full name, was born in Blackpool in 1973 and brought up in Fleetwood. He listened to his father's operatic recordings from a young age and went on from there. He sang arias while polishing cars. A customer suggested that he should audition for the D'Oyly Carte Opera Company, and the rest, as they say, is history.
14. PEOPLE: When Prince George of Cambridge was born on 22nd July 2013 he jumped into what position in the line of succession to the throne?

At the time of his birth, his paternal grandfather, Prince Charles was first in line. He was followed in second place by George's father, William the Duke of Cambridge. Prince Harry dropped down to fourth place at the time.
15. RELIGION: Who is the Head of the Church of England?


Answer: Queen or King of England

King Henry VIII famously broke away from the Church in Rome during his desperate attempts to produce an heir to the throne. Since then, the monarch of England has been the Supreme Governor of the Church of England. The Primate, or religious head, is the Archbishop of Canterbury.
16. SCI/TECH: You could not be taking this quiz without the invention, freely given to the world, by which Englishman?

Sir Timothy (Tim) John Berners-Lee, OM, KBE, FRS, FREng, FRSA, DFBCS (born 1955), is the computer scientist who invented the World Wide Web and sent the first message via the Internet in November 1989. He is very modest about what he did, stating in many places that all of the bits needed were already there, and all he did was put them together in a way that nobody else had thought of before.
17. SPORTS: What was Englishman John Surtees the first to do in 1964?


Answer: Became World Champion on both two and four wheels

John Surtees was born in 1934. He grew up with motorbikes as his father ran a dealership. He won his fourth 500cc World Championship in 1960 and then switched to Formula One racing. He was the first person to become World Champion on both two and four wheels and as of 2014 was still the only person to do so.

Englishman Graham Hill is the only driver to have won the Triple Crown of Motor Racing and this feat will not be equalled unless the date of one of the races is changed. The three races involved are the Indianapolis 500 and the Monaco Grand Prix, which are held on the same day and the Le Mans 24 Hours race.
18. TELEVISION: John Lloyd is a prolific English writer and producer for both radio and television. Which of the following was the television series that he started to produce in 2003 after a self-imposed gap of fourteen years?

"QI" is a comedy panel show. "QI" was chosen for the name as it is IQ (Intelligence Quotient) in reverse, however Steven Fry as the chairman and his many guests all appear very clever as well as extremely funny. Sandi Toksvig took over the hosting duties from Fry in 2016.

"Little Britain", "Posh Nosh" and "State of Play" all premičred in 2003.
19. VIDEO GAMES: Which very popular and internationally played video game was produced in England for the Japanese distributors in 1994?

"Donkey Kong Country" was produced by Rare Ltd in Leicestershire, England who are the successors of Ultimate Play the Game, which was started in 1982. The company worked in partnership with Nintendo, before being purchased by Microsoft in 2002.

There are rumours that Tim and Chris Stamper, the brothers who were the founders and driving force behind both Ultimate and Rare, may revive the original "Ultimate" name.
20. WORLD: What industrial model village in West Yorkshire was designated a World Heritage Site by UNESCO in 2001?

Saltaire is a Victorian village that is now part of the City of Bradford, Metropolitan District. It was specifically built as a model village in 1851 on the River Aire and the Leeds and Liverpool canal. It was named for the river and Sir Titus Salt who founded the village to house his new woollen mills and the workers needed to service them.
Source: Author lonely-lady 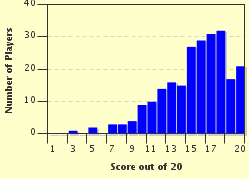 Related Quizzes
This quiz is part of series All my Generals:

For my second quiz list, I have brought together all of my quizzes from the "General Category. Enjoy!


Other Destinations
Explore Other Quizzes by lonely-lady