Here is a little quiz about the nation which I love most---England. Only true Anglomaniacs need apply!

Quiz Answer Key and Fun Facts
1. What is the highest point in England?

Scafell Pike is located in the Lake District and at 3,210 feet is the highest point in England.
2. What city is England's 'steel city'?

The sleeve for Oasis' 1994 single "Whatever" was photographed at Ringinglow in Sheffield.
3. What is the name of the large inlet in Eastern England?

There is a legend that King John lost his jewels in The Wash!
4. What is the most westerly county of England called?

Land's End in Cornwall is England's most westerly point.
5. What body of water is Weston-Super-Mare on?

England's longest river, the Severn flows into the Bristol Channel.
6. What writer inspired the band name 'The Doors'?

'when the doors of perception open...' Huxley in turn took inspiration for the line from a poem by William Blake.
7. Who wrote 'Death in the Clouds'?

Yet another Agatha Christie mystery and a good one too.
8. Who is the main character in 'A Clockwork Orange'?

The movie did not do Anthony Burgess' novel justice.
9. 'There'll always be an England where there's a country ____'?

Often sung by Vera Lynn in World War II. Ever listen to the Tiny Tim version?
10. Who wrote 'The Faerie Queen'?

Written in three volumes by Edmund Spenser. The first was published in 1590. A great example of English medieval literature.
11. What Led Zeppelin album is 'Nobody's Fault but Mine' on?

Presence is one of Zep's lesser known and appreciated albums.
12. Who were the Fab Four?

13. What does Brian May of Queen prefer his guitar to be called?

Brian built the guitar he uses himself out of an old solid wood fireplace mantle and considers 'Fireplace Guitar' to be inappropriate.
14. What animal is Fleetwood Mac's symbol?

Just look at the inside album cover of 1975's 'Fleetwood Mac' if you don't believe me.
15. Where was the British Woodstock held?

The 1970 show is available on CD and is really smashing!
16. What would you do with an OED?

OED stands for Oxford English Dictionary.
17. What would you do with an egg flip?

Egg flip is British for eggnog and you don't cook it.
18. What is a rasher?

The term can also be used to describe a group of three or four pieces.
19. What is a quid?

It cost how many quid Dorothy? Crikey, you're out of your mind!
20. What item of clothing are plimsolls?

21. What year was the Magna Carta sealed by King John at Runnymede?

King John was forced to seal this charter by a group of English barons. It is the basis of England's constitutional liberties.
22. In which year did Queen Victoria die?

Queen Victoria died on the Isle of Wight.
23. Which monarch preceded Victoria?

Queen Victoria was eighteen when she became Queen of England on the death of her uncle, William IV in 1837.
24. In what year was the Battle of Hastings?

William of Normandy and his knights fought King Harold and his army in October 1066. King Harold was killed in this battle.
25. Who was Prince Charles' godfather?

Louis Mountbatten, First Earl Mountbatten of Burma, was killed when the IRA (Irish Republican Army) blew up his boat in 1979.
Source: Author Fivehouse 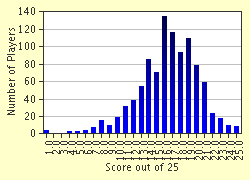 
Other Destinations
Explore Other Quizzes by Fivehouse