Whose Cat Is That? Trivia Quiz

Cats are all over the place - in movies, on television, in cartoons, in our homes, etc. See if you can make the right cat connections in this quiz. All multiple choice.

Quiz Answer Key and Fun Facts
1. The Egyptians have been credited for years with the domestication of cats, but this theory has become subject to question. A 9500-year-old gravesite that included the burial of a cat which is thought to have been domesticated was discovered on which of the following islands?

This archeological find was at a Neolithic site and predates the artistic evidence found in Egypt. It was reported by National Geographic News in 2004. Additionally, figurines have been discovered in Turkey that are of cats.
2. Garfield is a famous lasagna-loving cartoon cat. Who does he belong to?

Jim Davis is the creator of Garfield so technically he "belongs" to Jim, too, but the correct answer is Jon.
3. Which character on the television series "Friends" introduced the world to Smelly Cat?

Phoebe wrote songs about Smelly Cat and started singing them at the coffee shop she and her friends frequented.
4. Socks was the family cat of which U.S. presidential family?

Socks lived to be twenty years old and died in February 2009.
5. Who is the talking cat in the television show "Sabrina the Teenaged Witch"?

Not only does Salem talk, but he also drives.
6. Who composed "Cats", a long-running musical on both West End and Broadway?

Andrew Lloyd Webber's production was based on T.S. Eliot's "Old Possum's Book of Practical Cats". The musical set records as longest-running musical both on Broadway and West End, but those records have since been broken. Memory is probably the most famous song from the musical "Cats".
7. Nobita Nobi is a cartoon character who is befriended by a robotic cat from the future. What is his name?

This popular character appeared in a Japanese television series for over 10 years and there are over 1000 episodes. Dorami is Doraemon's sister and Dogu is a word that refers to the special devices from the future that Doraemon uses.
8. Dinah is a Disney cat that belonged to which of the following characters?

Alice left Dinah behind when she went on her adventures, but she met another feline friend, the Cheshire cat, while in Wonderland. Cinderella's family had a mean cat named Lucifer.
9. In the Disney movie "The Aristocats" (1970) Thomas O' Malley, the alley cat, meets a lost feline family. Which of the following is the mother in this family?

Duchess, and her three kittens, Marie, Berloiz and Toulouse, are all rescued by O'Malley. He ends up joining their family who live with Madame Adelaide Bonfamille. Eva Gabor is the actress who provides the voice for Duchess.
10. Which star of cartoons and comic books got his start in the credits of a movie?

The cartoon character The Pink Panther first appeared in the opening credits of the film "The Pink Panther" (1963), and went on to star in a very popular television series that ran from 1964 well into the 1970s.
11. Looney Tunes' Tweety Bird was often heard saying, "I tawt I taw a puddy tat." Who was that puddy tat?

Sylvester the Cat (aka Sylvester J. Pussycat Snr.), who made his first appearance in the mid-1940s, got in all kinds of trouble in the more than 90 cartoons in which he appeared. He talked with a lisp and this was emphasized with his often said expression, "sufferin' succotash".
12. This cartoon cat from Japan is very popular with girls and her products can be seen in pink-colored shops around the world. What is her name?

Hello Kitty started in Japan in 1974, but this popular cat is now all around the world. Her friends include other cats, a frog named Keroppi and a penguin named Badtz-Maru.
13. "The Lion, The Witch and The Wardrobe" by C.S. Lewis has a feline for a hero. What is this cat's name?

Aslan willingly dies for Edmund in this story, but he is resurrected from death and lives. He is a main character in the other books in this great series.
14. Puss in Boots, a fairy tale character of years gone by, has become well-known again through which movies?

Antonia Banderas did the voice for Puss in Boots in both the English and Spanish versions. Puss n Boots appeared in "Shrek 2" and "Shrek 3", but was not in the first "Shrek" movie.
15. For all you real trivia cats out there, what was the name of the Hanna-Barbera "wild" cat who entertained in television cartoons for years?


Answer: All three of these

Snagglepuss and Snaggletooth are sometimes identified as brothers and sometimes as cousins. Snagglepuss is the more famous of the two and his "career" has spanned decades (his first appeared in the late 1950s). Baby Puss is the saber-toothed pet of the Flintstone family. Although primarily seen in the opening sequence of the show, Baby Puss also appears in several episodes.
Source: Author SP44000 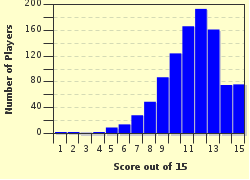