Do you know your birthstones? Take this easy quiz to see.

Quiz Answer Key and Fun Facts
1. What is the birthstone for January?

A vitreous mineral, garnet represents "constancy." The word garnet comes from the Latin "granatum," meaning "pomegranate" after the closeness in colour between the stone and the seeds of the pomegranate. Occasionally rose quartz is used as the birthstone for January.
2. Sardonyx is the birthstone of which month along with the peridot?

Also peridot is considered to be the birthstone for August and occasionally pounamu (greenstone, jade). Sardonyx is a variety of onyx with layers of sard. It represents "married happiness." It is the traditional birthstone for this month.
3. Representing "courage," bloodstone is the birthstone of which month?

Diamonds represent "innocence" or "eternal love." Considered to be the hardest stone. Used to cut glass, and also to drill into other stones. Occasionally quartz or white sapphire appear as birthstones for April.
5. Which of these is often considered the birthstone for October?

Representing "lovableness" or "hope," opal is made up of hydrated silica. Tourmaline is also accepted as this month's traditional birthstone.
6. Turquoise is a colour, as well as the birthstone for which month?

Made of hydrous aluminum phosphate, turquoise represents "harmony" and "unselfishness." Found most commonly in Persia, turquoise means "Turkish (stone)". Traditionally the birthstone for December is zircon and occasionally blue topaz is also used.
7. "Goodbye _____ Tuesday": The missing word from this The Rolling Stones hit is the birthstone for which month?

Ruby represents "love and passion," and is a species of corundum, varying from deep crimson to light rose-red. Occasionally carnelian is seen as July's birthstone.
8. Representing "cheerfulness" or "fidelity," topaz is the birthstone of which month?

Topaz is a silicate of aluminum, usually in yellow, but can range from white to deep blue. Topaz is classed as a semi-precious stone. The traditional stone for this month is citrine, and on rare occasions November is represented by diamond.
9. September's birthstone is _________?

Sapphire represents "wisdom" or "repentance" and is a variety of alumina. Very similar in composition to ruby. Occasionally this month's stone occurs as lapis lazuli.
10. Which stone is the birthstone for the month of February?

Amethyst is a variety of quartz, coloured by manganese. This purple stone represents "sincerity." From the Greek "amethustos" meaning "not drunken" (methu meaning "wine") as the stone was widely believed to prevent intoxication. Rarely seen as the birthstone for February are onyx and moonstone.
N.B. The modern stones were officially recognised in 1912, where the traditional stones date back to the 15th century.
Source: Author poodog 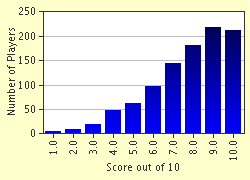 Related Quizzes
1. Interesting Facts About Jewels and Gemstones Easier
2. A Gem of a Year Easier
3. Who Says They're Only Semi-Precious? Average
4. Zircons Have Feelings, Too Easier
5. Birthstone and Flower Quiz Average
6. It Is What It Is Average
7. Gemstones Average
8. My Gem of a Family! Very Easy
9. Facts Associated with Various Gemstones Easier
10. Obscure Gemstones II Average
11. Australia's National Gemstone - The Opal Average
12. Blue is the Hue Average


Other Destinations
Explore Other Quizzes by poodog