Blue is the Hue Trivia Quiz

Whether it's aqua or blue-violet, prepare to be dazzled by these blue-hued gems. While you're at it, see how many you can identify.

Quiz Answer Key and Fun Facts
1. Blue-violet in color, this gem dates back to the Vikings. They used it to filter the sun's rays in order view the position of the sun in the sky for navigational purposes. Which gem is it?

This hard gemstone is produced from the mineral Cordierite. The gem's name comes from the Greek word "ios," which means violet. Iolite is a type of gemstone whose colors appear to change depending on the angle at which it is viewed. This type of optical phenomenon is known as pleochroism. Iolite is sometimes referred to as "water sapphire," although it is not related to sapphire.

It has more to do with the blue-violet color of the gem.
2. Carved artifacts and jewelry made from this rich blue gemstone were discovered in Egyptian burial sites predating 3000 B.C.E. In powdered form it was used by ancient Egyptians for cosmetics and even medicine. What is this highly prized stone called?

Lapis is made up of mostly lazurite, a blue mineral. It also contains pyrite, calcite, and some sodalite. Mines in Afghanistan were a source of this gem in ancient Egypt and Mesopotamia and still are today. In fact the name for this gemstone comes from the Arabic word "lazaward" which means "heaven" or "sky."
3. It's very name suggests water. Which light blue gemstone is also a birthstone for the month of March?

Aquamarine is a variety of beryl. Its name means "sea water." In ancient times, wearing aquamarine amulets depicting Poseidon, Greek god of the sea, was thought to protect sailors against harm. Most aquamarine comes from Brazil. Other sources include Pakistan, Nigeria, Tanzania and the United States, specifically Mt. Antero in Colorado.
4. Blue is the most valuable shade of this gemstone. It's a birthstone for the month of September. Which gemstone is it?

Sapphire comes from corundum, an extremely hard mineral, second only in hardness to the diamond. Before the 19th century, the term "sapphire" applied only to the blue shade. In ancient Egypt and during the Middle Ages, the blue sapphire was thought to cure eye diseases as well as offer protection against the evil eye. Australia, Thailand, Madagascar, and the U.S. are known sources for this gem.
5. Named for the California river where it was discovered in 1906, this bright blue gem is the official state gem of California. Which of the following is it?

The story goes as follows: a prospector near the San Benito River was looking for mercury and copper when he came upon some blue crystals he mistook for sapphires. What he found, of course, was benitoite, named for the San Benito River. The gem itself comes from a rare barium titanium silicate. It can also be found in smaller amounts in Arkansas as well as Japan.
6. The color of fossilized tree resin is usually yellow. However, a rare shade of blue can be found mostly in mountainous regions of the Dominican Republic. What is this rare gem called?

This particular type of amber comes from an extinct species of tree, Hymenaea Protera, which dates back millions of years. The blue color comes from hydro carbons which turn UV rays from the sun into blue light particles.
7. The name of this gem comes from the French word "Turkish" because it was originally transported to Europe through Turkey. It has been around for thousands of years and never seems to go out of fashion. Which stone is it?

Because it is soft and easy to work with, turquoise was one of the first gemstones to be mined. Discovered around 5000 BCE in Mesopotamia (Iran), not all turquoise has a greenish tint. It can appear in varying shades of blue depending on cosmetics and skin oils.

Although the best quality gemstones come from Iran, much of the turquoise in production today comes from copper mines in the southwestern region of the U.S.
8. The Greek word "kyanos," which means "dark blue," lends itself to the name for this gemstone. Easily identified by the elongated, flattened blades, name this gemstone.

Like iolite, kyanite is pleochroic, appearing blue, blue-violet, or even colorless when viewed from different angles. Due to its fibrous nature, this stone tends to break easily along its length, making cutting more difficult. Kyanite is found in mica schists and gneiss,a metamorphic rock.
9. Named for the country in which it was discovered in 1967, this gem is a beautiful purplish blue in color. In fact it has been mistaken for sapphire. Which gem is it?

Heat is the secret to obtaining the stunning shade of blue. In its rough state, tanzanite is reddish-brown in color. The scientific name for this gem is blue zoisite. Zoisite can be found in metamorphic rocks such as schist and gneiss and in quartz veins.
10. Sounding like something you have when you're hungry, the actual meaning of the stone's name comes from the Greek word for "deceit." The mineral occurs in a wide range of igneous rocks found in a wide range of countries: Madagascar, Brazil, Pakistan, Russia, Namibia and the U.S. It is known by what name?

Apatite comes in a variety of colors, blue being one of the most beautiful. Gem-quality apatite is usually recovered from pegmatites, igneous rocks with large crystals. By the way, the Greek work for deceit is "apate," thus the name of the gem.
Source: Author nmerr 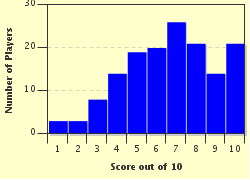