Quiz Answer Key and Fun Facts
1. Can you name the lovely yellow gem that is the birthstone for November?

A topaz is the birthstone for November. This gem comes in various shades, with the most popular being yellow. If given as a gift to anyone, it stands for friendship. During the Middle Ages, if any stone came with a yellow colouring, it was referred to as a topaz. Superstitions associated with this stone are that it protects one against evils, calamities, poisons, epilepsy, headaches and asthmatic attacks.

It keeps married couples from fighting, while increasing their desire and passion for one another, and it invites love, prosperity and bravery into your life.
2. Said to be a girl's best friend, what is this gem?

The birthstone for the month of April, diamonds come in many colours. The word diamond itself derives from the ancient Greek for unbreakable. Long, long ago, this stone was used in the art of engraving. Interestingly, not all diamonds originated on earth but from asteroid impacts instead. Superstitions associated with this stone are that it gives the wearer great courage, victory and fortune.

It also stands for a faithful marriage and protects against evil and the plague.
3. Its colour is associated with the land of leprechauns and lilting brogues. What is this gem?

Ireland is also known as the Emerald Isle because of its lovely shades of green. Emeralds can come in colours ranging from yellow to blue, but are most known for their green colouring. They are considered to be the birthstone for the month of May. Superstitions around this gem include the following: They protect against illnesses of the eye, blindness, memory loss, danger at sea and poisons.

They bring an easy childbirth, cure epilepsy and dysentery, ensure much love and success in life, and guarantee happiness and faithfulness in marriage and in courtship.

They endow the wearer with the gift of wit, honesty and fortitude. Finally, they preserve chastity and are considered to be an aphrodisiac. Dear me, those last two endowments are somewhat of an oxymoron, it would seem.
4. The name of this gem is associated with the death of John F. Kennedy and its aftermath. Can you name it?

Jack Ruby was the man who shot Lee Harvey Oswald, the assassin of President John F. Kennedy, in 1963. The beautiful blood red ruby is the traditional birthstone for the month of July. Rubies have to be red to be endowed with that name, otherwise they fall under the category of sapphires. Superstitions associated with the ruby include the belief that if one is placed under the foundation of buildings, good fortune will be the happy lot of its occupants. Rubies are said to ward off storm and flooding, prevent naughty thoughts and nightmares, preserve chastity, help poor eyesight and bring love and happiness.

It was also believed that its colouring would fade if a wearer was not truly in love and that it dimmed whenever evil was nearby.
5. What is the name of the beautiful iridescent gem which seems to constantly change colours under different lights?

The opal is the national gemstone of Australia, and more than 90% of the world's opals come from that country. Ethiopia is a growing source for this stone as well. The opal, which is the birthstone for the month of October, comes in very many lovely iridescent colours, with of course an assorted number of superstitions.

These include the following: Only someone born in October, or also wearing diamonds, should wear opals, or bad luck will be the result. A white opal should never be used as an engagement ring, as this is very unlucky.

They help protect eyesight and maintain a lovely sheen to blonde hair. If the owner dies, the stone's colours are said to fade. They give the power of prophecy to anyone with pure thoughts, but also fade in the presence of evil. Black opals are the luckiest colour of all to wear.
6. The largest beryl was found in a country with a capital city of Antananarivo. What is that country?

Pure beryl is normally completely colourless, but finding one of those is like finding a needle in a haystack. Most come with tinges of other colours. Amazingly so, the world's largest beryl is fifty-nine feet long, eleven foot in diameter and weighs over 800,000 pounds! Try wearing that on your finger.

It was found in Madagascar, an island country off the south-east coast of Africa, in the Indian ocean. Beliefs associated with this stone, of which there are relatively few, are that any wearer of same will become extremely attractive to the opposite sex, and that wearing beryl will attract love into your life.
7. The gem was so named because it was introduced to the European world from a country whose capital was Constantinople. Do you know this gem?

The turquoise has been around since time began, but the word itself dates back to the 17th century in France. This was because the country of Turkey introduced this gem to Europe. Most of the world's turquoise came from Iran originally, however. This gem is the birthstone for the month of December.

It is believed that it protects one from accidents, and horse-riding accidents in particular. It is also thought to ward off the evil eye, and to change colour if danger or illness was about. Other beliefs are that it endows the wearer with courage and love, prevents headaches, settles arguments and helps renew friendships.
8. "A White Sport Coat and a Pink ..." no wait, that can't be right. What is this gem that could almost fit into the name of that old song?

"A White Sport Coat and a Pink Carnation" was a song made popular in 1957 by the great old singer, Marty Robbins. Most deposits of carnelian are found today in Brazil, Germany, India and Serbia. This ageless stone has been known to man since the Bronze Age at the very least.

It was even thought to be the first stone in place in the high priest's breastplate in the days of ancient Israel. Superstitions associated with the carnelian are that it protects the wearer against impure thoughts, and against lightning, indigestion, arthritis and fever.

It is also thought to stop bleeding, and endow the wearer with confidence, bravery and many friends.
9. This exquisite stone is associated with Florida, not because it has any known natural deposits of same, but because of the famous date, 20 July 1969. What is it?

Neil Armstrong first set foot on the moon on that historic date in the history of mankind. The lovely moonstone though, as an ornament, has been worn by man for centuries, going right back to ancient times. Associated with the lunar gods, it was thought to have been created by solidified moonbeams. Because it is associated with the moon landings which took off from Florida in modern times, this is the state gemstone for that state. For the time being at any rate. Florida doesn't actually have any known deposits of this stone. Beliefs associated with the moonstone are that it protects travellers (very appropriate) and sailors, and cures tuberculosis and kidney troubles.

It is also thought to reconcile quarrelling lovers and to ensure good fortune.

A further belief has it that placing a moonstone in one's mouth during a waning moon helps guide one as to which course of action to follow. Apart from choking to death, that is.
10. The name of this purple gem is rather hard to pronounce without sounding as though one has a pronounced lisp. Do you know its name?

Birthstone for the month of February, the lovely violet amethyst was known back as far as ancient Greek, Roman and Egyptian days, when it was believed to protect one from becoming intoxicated. Somehow, this doesn't appear to have really worked in many cases.

The traditional stone for the month of February, the beliefs and superstitions associated with this gem include the following: It protects one in battle, and against bad dreams, storms, plagues and locusts. It also wards off headache, toothache and gout, and brings a calm and settled mind and contentment. Additionally, wearing an amethyst protects the wearer from falling in love with the wrong person, and, by changing its colour, alerts a person that poisoned food is nearby.
Source: Author Creedy 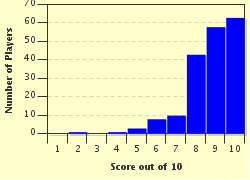