Most of us are familiar with rubies, sapphires, and emeralds. This will be a short quiz on some lesser known gemstones. You may be inspired to make some additions to your jewelry collection!

Quiz Answer Key and Fun Facts
1. Early in the 20th century, Tiffany & Company honored financier J.P. Morgan by naming a gemstone after him. Originally mined in Pala, California, what color is morganite?

Morganite comes in shades of medium to light pink. Morganite is also mined in Brazil, Russia and Madagascar, with smaller mines dotting the globe. The largest faceted morganite is a 598.70 carat gemstone that is in the collection of the British Museum. One of the more unusual aspects of this gemstone is that the color will fade when exposed to sunlight for long periods of time.
2. The Tsavorite garnet is a beautiful gemstone found only in shades of vibrant green. Discovered in 1967 in the Tsavo mountain range, this gem has remained somewhat of a secret. Where are these gem-rich mountains located?

The Tsavo Mountains are found in Tanzania and Kenya. This vein was found in 1967 and mining started in 1971. The Tsavorite garnet is an unusual stone. It is a lovely shade of green instead of the red hues most people associate with garnet. Its depth of color rivals that of a fine emerald and so does its price.

Its clarity far exceeds that of most emeralds. It is found only in the Tsavo Mountains of Kenya and Tanzania, and in a small area of Madagascar.
3. The Mexican Fire Opal looks nothing like its cousin, the Australian Opal. It is usually solid colored and translucent. What is the flaming color of this gemstone?

The Mexican Fire Opal comes in brilliant shades of orange, sometimes with hints of red or yellow. The largest and most productive fire opal mine is found in the state of Queretaro in Central Mexico. This mine is acknowledged as producing some of the finest fire opals on the market. Like all opals, Mexican Fire Opals are a softer gemstone and rate only a 5-6 on the Moh's hardness scale.
4. Lapis lazuli has been used since antiquity for adornment. Jewelry inlaid with this lovely blue stone was found in which of the following unusual places?

Lapis is a vivid blue. It is a rock as opposed to a mineral. It was used for all kinds of jewelry in most ancient cultures of Europe, Asia, and Northern Africa. It can be seen in the gold death mask of the Pharaoh Tutankhamen. It often contains pyrite, which makes it look like it has small flecks of gold embedded within.
5. Chrome diopside is a beautiful gemstone often imported from Russia. What envious color is it?

Chrome diopside is often called Russian diopside. It is a very brilliant green stone, with wonderful translucency. Its only downside is that it is somewhat soft. Not discovered until the 19th century, the gem can be found in Canada, South Africa, Montana (US), and Russia. If you like emeralds, you will love the look of the diopside!
6. While pearls can be dyed any color, all natural pearls are white when they are harvested.

Different oysters produce different colored pearls. The black-lipped oyster produces black pearls which have been highly prized throughout history because of their rareness. Also, pink, lavender, peach, and a variety of other shades can be found naturally.

These colored pearls are sometimes more highly prized than white ones, because of their rarity. Pearls that are sold with a bright or very vibrant color are usually dyed. The naturally colored pearls are commonly found in pastel shades, with the exception of black pearls.
7. The Black Prince's Ruby is a 170 carat stone that sits in the Imperial State Crown of Great Britain. In the 19th century, it was discovered that this stone was not a ruby at all. What kind of a gemstone is this royal possession?

All of the choices do come in varieties of red, but the correct answer is spinel. Red spinel is usually mined in the same area that rubies are mined. It was not until the 19th century that it was realized that they were two different stones. Spinels often have an unusual inner glow or "fire" to them.

They frequently have better clarity than rubies. However, spinel is slightly softer than a ruby, meaning that a ruby can scratch a spinel but not the other way around.
8. Chatoyancy is the word used to describe a gemstone that changes colors depending on the angle that it is viewed at. Which of the following gemstones might be considered chatoyant?

The Tiger's Eye changes colors and the banding of colors seems to move if you move the gemstone around in your hand. That is chatoyancy. Turquoise may have slender tangled hairs of black, but the color does not change or move when the position of the stone is changed. Coral and onyx are both solid in color.
9. One of my favorite gemstones is ametrine. It is a combination of amethyst and citrine. Now that you know that, what two colors would an ametrine be?

Ametrine comes from a quartz crystal that is part amethyst and part citrine. It occurs naturally in the Anahi mine in Bolivia. Mining for it has been attempted in other locations. The crystals change color halfway up the shaft. The gemstone is often cut in a square or emerald cut. One half will be purple and the other half will be yellow. No treatment is done to the gem.

It is just another one of Mother Nature's artworks!
10. What is the rarest and often most valuable color for diamond?

While white or colorless diamonds usually demand a high price, they are not the most valuable diamonds. If a diamond is colored, it is called "Fancy". Its price usually skyrockets when compared to a colorless diamond of the same weight, cut, and clarity. Red diamonds are the rarest and the most highly valued.

The largest red diamond in the world is the Moussaieff Red Diamond. It is 5.11 carats and was valued at over seven million dollars by the Gemological Institute of America in 2005.
Source: Author dcpddc478 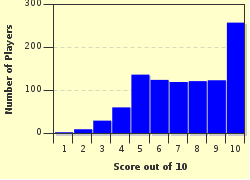 Related Quizzes
1. Gold in Thailand Tough
2. Ingots We Trust Tough
3. Facts Associated with Various Gemstones Easier
4. Agate and her Sisters Tough
5. Out Of the Forest Primeval: Amber Tough
6. Who Says They're Only Semi-Precious? Average
7. This is a Gem of a Quiz Average
8. Shine Bright Like a Diamond Average
9. Gems: Myths and Legends Difficult
10. Interesting Facts About Jewels and Gemstones Easier
11. Blue is the Hue Average
12. Gemstones Tough