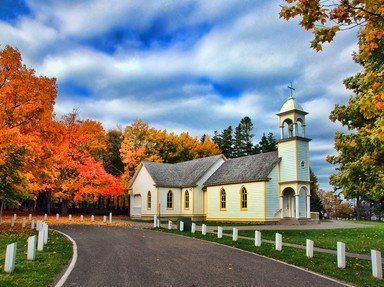 A trip around New Brunswick can be very interesting. Here are some questions about the picture province

Quiz Answer Key and Fun Facts
1. What is the largest lake in New Brunswick located between Fredericton and Moncton?

The lake drains through the Jemseg River into the Grand Lake Meadows, and then into the Saint John River. There are many summer homes in the Grand Lake area.
2. Truly one of Canada's premiere roadside attractions "Magnetic Hill" is located on the outskirts of which city?

Magnetic Hill is an optical illusion. Legend has it someone parked their car at the site and the car rolled uphill.
3. The Reversing Falls is located at the mouth of the Saint John River

The natural phenomenon of the Reversing Falls is caused by the tremendous rise and fall of the tides of the Bay of Fundy. The Saint John River begins in Northern Maine and follows a 600 KM path to its' mouth.
4. What is the capital city of New Brunswick?

Situated along the banks of the beautiful St. John River. Fredericton is also a university town with over 14000 students.
5. In what city are the New Brunswick Botanical Garden and the Mont Farlagne Ski area located?

Known as the Gateway of the Maritimes, Edmundston which is located on the banks of the Saint John river is in the north-western part of New Brunswick.
6. Where is New Brunswick's industrial city and home base for the Irving Empire located?

Located in the southern part of the province. Saint John is the oldest incorporated city in Canada. If you like old buildings and antiques this is the place to be.
7. Campobello Island located of the coast of New Brunswick where Franklin Roosevelt spent some of his summers is part of the USA.

Campobello Island is one of the New Bruswick's three Fundy Isles, on it you can visit Franklin Roosevelt's summer home. The other two Fundy Isles are Deer and Grand Manan Islands.
8. Parlee Beach Provincial Park is located near this small fishing town which is famous for its lobster fishing. Can you name the town?

The town calls itself the "Lobster Capital of the World".The beach is one of the warmest in Canada because it is on the Gulf Stream.
9. The following names Kennebecasis, Hammond, Belleisle, and Miramichi all represent what? 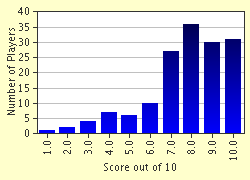 
Other Destinations
Explore Other Quizzes by isaacf