I was surfing through the quizzes and there wasn't a single quiz about my hometown in Maine, so I decided to create one.

Share on Facebook
Share on Twitter
Share by E-Mail
Author
HoldenW
Time
3 mins
Type
Multiple Choice
Quiz #
305,848
Updated
Dec 03 21
# Qns
10
Difficulty
Average
Avg Score
7 / 10
Plays
329
This quiz has 2 formats: you can play it as a or as shown below.
Scroll down to the bottom for the answer key.

The town of Rockland was originally named East Thomaston but it changed its name in 1850. Rockland is a big seafood port.
2. Rockland is located on the coast of Maine.

To live in Rockland, you mostly survive on lobster and other seafood that can be found in the ocean. The majority of the seafood consumed in the US is caught in and around this area. Rockland Harbor is located on the Atlantic Ocean.
3. Rockland, Maine is known best for its annual celebration of which festival?

Lobster and other seafood, such as clams and shrimp, are very popular in Maine. The annual festival features 20,000 pounds of lobster cooked in the world's greatest lobster cooker, as well a parade, a crate race and the crowning of a sea goddess.
4. The Wyeth Center is in the Farnsworth Museum in Rockland, Maine.

The Wyeths are among the most popular artists in Maine. You can visit the Farnsworth Art Museum which comprises the Farnsworth Homestead and Olsen House, buildings which have been listed on the National Register of Historic Places.
5. In 2001, what movie was partly filmed in Rockland, Maine?


Answer: In the Bedroom

"In the Bedroom" was released in 2001. Some scenes of the movie take place in Rockland, Maine. The film starred Sissy Spacek, Tom Wilkinson, and Marisa Tomei.
6. Of which county in Maine is Rockland located?

Rockland is the county seat for Knox county which was incorporated in 1860. Aroostook is the largest county by area in Maine.
7. Which Pulitzer Prize winning poet came from Rockland, Maine?

She won the prize in 1923 for her compositions 'The Ballad of the Harp-Weaver', 'A Few Figs from Thistles' 'Eight Sonnets in American Poetry, 1922. A Miscellany'. Interestingly, Robinson also came from Maine.
8. Rockland was discovered by Lermond. What was his first name?

John Lermond was from Warren, Maine and in 1767 with his two brothers moved to the area to produce timber. In 1769 it became known as Lermond's Cove and later on became a district in Thomaston. John was seriously allergic to seafood; if he ate just a little he would get sick and die.
9. Who built the Rockland Breakwater Lighthouse?

The lighthouse was built in 1902 on Vinalhaven which is an island out in the Atlantic Ocean.
10. In addition to seafood, what other industries have played a prominent part in the development of Rockland?

The economy of Rockland relied heavily on the production of lime and the building of ships and when the Knox and Lincoln railroad was built it resulted in a large influx of tourists. Although the seafood industry remains the prime income earner, tourism in the form of boutique eateries, art galleries and inns are generating much needed capital to the area.
Source: Author HoldenW 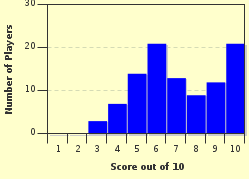 
Other Destinations
Explore Other Quizzes by HoldenW