Augusta is the state capital of Maine. Maine is nicknamed the "Pine Tree State" as approximately 90% of its land is forested - it is the least densely populated state east of the Mississippi River.

Augusta is home to Viles Arboretum, previously known as the Pine Tree State Arboretum, a botanical garden and arboretum showcasing over 300 local species of trees and shrubs.
2. What is the state capital where Mount Rushmore is located?

Pierre is the state capital of South Dakota and is located on the Missouri River in the geographic center of the state. Pierre became the capital when South Dakota achieved statehood in 1889.

Mount Rushmore National Memorial is nestled in the Black Hills of South Dakota. The four U.S. Presidents carved into the granite rock are George Washington, Thomas Jefferson, Theodore Roosevelt, and Abraham Lincoln.
3. What is the state capital named after the third President of the United States, the principal author of the Declaration of Independence?

Jefferson City is the state capital of Missouri and is named after Thomas Jefferson, the who served as President from 1801-1809. Among numerous lifetime achievements, Thomas Jefferson oversaw the purchase of the Louisiana Territory in 1803 and founded the University of Virginia in 1819.

Daniel Morgan Boone, son of the famous frontiersman Daniel Boone, was responsible for the design plans of Jefferson City in the early 19th century.
4. What is the state capital established on the longest river system in North America, and whose name translated means "Red Stick"?

Baton Rouge is the state capital of Louisiana and is located on the Mississippi River. The Mississippi River along with its major tributary, the Missouri River, is the longest river system in North America and the fourth longest in the world.

Tallahassee is the state capital of Florida, the "Sunshine State" - adopted as the official state nickname in 1970.

Everglades National Park was created to protect the wetlands ecosystem from human agricultural and residential activity. Also designated a World Heritage Site, Everglades National Park is visited by over one million people per year.
6. What is the state capital where the state caucuses are held representing the first major electoral event in the nomination process for the President of the United States?

Des Moines is the state capital of Iowa, where the Iowa caucuses are held every four years and serve as a significant early indication of the presidential frontrunners for political party nominations.

Des Moines and the Des Moines River were named by French explorers. It is a French phrase meaning "River of the Monks"; however, despite several theories, the precise reason for the naming is not definitive.
7. What is the state capital found in New England on the Merrimack River, where the Christa McAuliffe Planetarium is located?

Concord is the state capital of New Hampshire and received its name following the resolution of a boundary dispute as the word "concord" is a synonym for "harmony".

The Christa McAuliffe Planetarium is a state-of-the-art facility dedicated in honor of the educator who tragically lost her life in the Challenger Space Shuttle explosion in 1986. Christa McAuliffe was a teacher at Concord High School and had won the "Teacher in Space Project", an effort by NASA to put the first civilian into space.
8. What is the state capital located in the South, named after the seventh U.S. President, and the site of the world's first human lung transplant?

Jackson is the state capital of Mississippi and is named after Andrew Jackson, the seventh President of the United States. The University of Mississippi Medical Center in Jackson was where James Hardy performed the first human lung transplant in 1963.

Located on the Pearl River, Jackson is host to the USA International Ballet Competition, held every four years and one of the elite ballet competitions in the world.
9. What is the state capital that was an important political and supply center during the Civil War, and is found halfway between the Blue Ridge Mountains and the Atlantic Ocean?

Columbia is the state capital of South Carolina and was an important city for the Confederacy during the Civil War due to its location, population size, and railroad lines. During the war, the central part of the city was heavily burned by fires, and Union General Sherman and his army destroyed essentially everything of military value, including the railroad depots.

A number of colleges are in Columbia, including The University of South Carolina main campus.
10. What is the state capital of the state that borders Mexico and is the largest in area of the contiguous United States?

Austin is the state capital of Texas and is named after Stephen F. Austin, who is referred to as the "Father of Texas". He led the first successful colonization of the region with 300 American families (later called "The Old 300"). 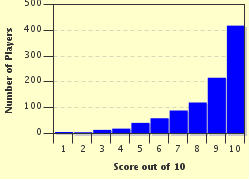