U.S. state capitals - How well do you know them?

Quiz Answer Key and Fun Facts
1. What is the state capital where George Washington achieved a major military victory against 1,500 Hessians during the American Revolutionary War?

Trenton is the capital of New Jersey and was the location of the Battle of Trenton during the American Revolutionary War. After George Washington's famous crossing of the Delaware River, he then attacked 1,500 Hessian soldiers garrisoned at Trenton. Hessians were German regiments hired to fight in the war by the British Empire.

The Battle of Trenton was a major victory for George Washington and the Continental Army as it provided a huge morale boost to his troops.
2. What is the state capital where "One Flew Over the Cuckoo's Nest", starring Jack Nicholson and Louise Fletcher, was filmed?

Salem is the capital of Oregon and is home to the Oregon State Hospital where One Flew Over The Cuckoo's Nest was filmed. It is the primary state-run psychiatric hospital in the State of Oregon.

"One Flew Over the Cuckoo's Nest", released in 1975, was nominated for nine Academy Awards, winning five of them, including Best Picture. Ken Kesey, the author of the novel "One Flew Over the Cuckoo's Nest", is a famous alumnus of the University of Oregon.
3. What is the state capital located on the west bank of the Hudson River, near its confluence with the Mohawk River?

Albany is the capital of New York and is approximately 150 miles north of New York City, and 10 miles south of the confluence of the Hudson and Mohawk Rivers. Albany is one of the oldest European settlements from the original 13 colonies.

The Hudson River is primarily located in the state of New York, although a portion of the river flows into New Jersey. The river is named for Henry Hudson, an Englishman who explored it in 1609.
4. What is the state capital that derived its name from the French translation of "the woods"?

Boise is the capital of Idaho and its name comes from the French "Les Bois" for its many trees. The generally accepted story regarding the naming involves Captain Benjamin Bonneville of the U.S. Army.

Captain Bonneville was exploring the American West and had reached a vantage point overlooking the Boise River Valley. His French-speaking guide, in awe of the beautiful view, shouted "Les Bois! Les Bois!" ("The Woods! The Woods!").
5. What is the state capital located at the southern end of Puget Sound?

Olympia is the capital of Washington and is located at the southern end of Puget Sound, specifically on Budd Inlet. Puget Sound is the name of both the body of water as well as the surrounding region centered on the sound.

Puget Sound is connected to the Pacific Ocean via the Strait of Juan de Fuca. Orcas and salmon are commonly found in Puget Sound as well as geoducks, which are a species of saltwater clam and a delicacy in Asia.
6. What is the state capital nicknamed "Music City"?

Nashville is the capital of Tennessee and is nicknamed "Music City". It is home to the Grand Ole Opry, the Country Music Hall of Fame, and a large number of record labels - particularly those associated with the country music industry.

The "Music City" moniker was coined by WSM (AM) radio personality David Cobb in 1950. This Nashville-based station hosts The Grand Ole Opry radio program which began airing in 1925. It is currently the world's longest running radio program.
7. What is the state capital of the "Buckeye State"?

Columbus is the state capital of Ohio. Ohio's state tree is the Buckeye, a medium-sized deciduous tree. Its fruit is a round, brown, nut-like seed. As these seeds contain tannic acid, the Native Americans would blanch the seeds in order to extract the acid for use in leatherworking.

The Ohio State University is located in Columbus and is one of the largest U.S. colleges in terms of enrollment. Its sports teams are nicknamed the "Buckeyes".
8. What is the state capital where the Alfred P. Murrah Federal Building was bombed in 1995?

Oklahoma City is the state capital of Oklahoma and was bombed in the most destructive act of terrorism on U.S. soil prior to the NYC September 11th attacks.

Timothy McVeigh detonated an explosive-laden truck parked in front of the downtown Alfred P. Murrah Federal Building. Tragically, 168 lives were lost and nearly 700 people were injured. More than 300 buildings were destroyed or damaged in the blast.

Timothy McVeigh was captured shortly thereafter and executed in 2001. It was the first federal execution in 38 years in the United States.
9. What is the state capital that was named after a famous American frontiersman who participated in both the Mexican-American and American Civil Wars?

Carson City is the state capital of Nevada and was named for the famous 19th century American frontiersman Christopher "Kit" Carson. Kit Carson began as a trapper in the West and then gained fame as a guide for controversial figure John C. Fremont.

Kit Carson's legend lives on through numerous novels, films, television programs, and comics centered around him. The Kit Carson Home and Museum is a U.S.-designated National Historic Landmark in Taos, New Mexico.
10. What is the state capital located on Chesapeake Bay where the U.S. Naval Academy can be found?

Annapolis is the state capital of Maryland and is located on the Chesapeake Bay at the mouth of the Severn River. Annapolis is less than 30 miles from both Baltimore and Washington, D.C.

The United States Naval Academy was established in 1845 by George Bancroft while he was serving as U.S. Secretary of the Navy. Students at the U.S. Naval Academy are referred to as "Midshipmen".
Source: Author Scallop44 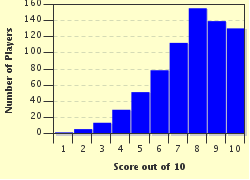