This quiz is a mix of World and American history. Mostly from my high school curriculum. I hope you have fun taking the quiz, and good luck!

Quiz Answer Key and Fun Facts
1. The Etruscans were skilled at dentistry and were the first to invent false teeth.

Believe it or not this is true. The Etruscans were very skilled at dentistry, although they did not pass it on to the Romans - unlike many of their other skills and inventions.
2. Who wrote the "The Star Spangled Banner"?

Francis Scott Key watched in amazement and wrote this patriotic song on a boat, while watching a battle unfold in front of him.
3. What was the line that divided the Louisiana Territory into the slave half and the free half.

Sorry, this one was kind of tough. The 36-30 line was formed under the Missouri Compromise. It also settled, at least for a time, the issue of whether or not Missouri was going to be a free or slave state.
4. Who was the first emperor of Rome?

Smallpox was actually one of a number of diseases spread by the European settlers to the Native Americans.
6. One of Socrates' major points in his teachings was to ___________?

Socrates not only asked questions himself, but also taught his students to ask questions and this was to set an important precedent - hence the famous "Socratic method."
7. What was the setting for the first attempt by England to colonize in America that failed miserably?

This one was tough, so if you got it give yourself a pat on the back. The first successful colony for England was Jamestown, but the Lost Colony (Roanoke) was the first attempt. The people of this colony were lost, and it is still not known what happened to them.
8. Who was the on-field leader of the British troops when they surrendered to George Washington at Yorktown on October 19, 1781?

Cornwallis was an amazing British general, feared by most who faced him in battle, but it was too bad for him that he had to face an even greater general, George Washington.
His superior at the time of the surrender was Sir Henry Clinton.
9. Which part of Berlin was Communist during the Cold War?

East and West Berlin were physically divided by the Berlin wall from 13 August 1961 till 9 November 1989.
10. Did the first line of Martin Luther King Jr.'s "I Have A Dream" Speech contain the words "I have a dream"?

Although this line of Martin Luther King Jr.'s speech is the most widely known part of the speech, the speech actually starts with King welcoming his guests to the rally in front of the Lincoln Monument.
11. What was the shape of the Roman shield?


Answer: it changed over time from circular to rectangular

When using rectangular shields the Romans sometimes put them together to form a defensive 'wall'.
12. The name for the time period where there was an extraordinary decrease in learning and knowledge in Western Europe was known as the _______ ________.

The only large group to actually succeed in keeping records and continue learning during the Dark Ages were the monks. In Byzantium learning continued in this period.
13. Alexander the Great was of Macedonian descent.

Alexander the Great, originally from Macedonia (which included parts of modern Bulgaria), became ruler of a vast Greece empire.
14. Who is thought by most historians to be the first European to discover the "New World"?

Erickson, along with his band of Vikings, is actually thought to be the first to discover this great land. He is thought to have landed somewhere in what is now Canada.
15. Name the places where the first two battles of the Revolutionary War took place.

After a gun shot went off (unknown by who or which side) at a standoff between the minutemen and the British in Lexington the Revolutionary War was under way.
Source: Author shooster 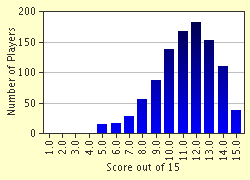 
Other Destinations
Explore Other Quizzes by shooster