You ever get that weird feeling walking through a very old place, wondering about all that happened there through the years? Here's a quiz about some of those spots where something indeed happened.

Quiz Answer Key and Fun Facts
1. 2122 N. Clark Street in Chicago, Illinois was the site of what Prohibition-era event?

On February 14, 1929, six members of a gang run by George 'Bugs' Moran (along with an innocent bystander) were lined up against the wall of a garage by members of Al Capone's gang and shot to death. The original garage site was demolished in 1967, and is now a parking lot for a nursing home.

The wall where the gangsters died was dismantled brick by brick, sold at auction and shipped to a Canadian businessman, who rebuilt it in the men's restroom of a bar with a Roaring Twenties theme. After the bar closed, the bricks were sold as souvenirs.
2. The building at 411 Elm Street at the western end of Dallas, Texas' central Business District housed what historic site?

It was here that the Warren Commission concluded that Lee Harvey Oswald lodged himself in the seven-floor building on Dealey Plaza in downtown Dallas and fired several rifle shots to end the life of President John F. Kennedy on November 22, 1963. Of course, there are lots of conspiracy theorists with their own ideas of what happened...
3. 1-10 Otemachi, Naka-ku in the city of Hiroshima, Japan is near what site?


Answer: 'Ground Zero' of the first atomic blast in warfare

Formerly the city's Prefectural Industrial Promotion Hall, this is the current address of the 'A-Bomb Dome', one of the few buildings left standing near the hypocenter of the first atomic explosion, August 6, 1945.
4. What happened in front of Moritz Schiller's food store on Franz-Josef Street and the Appel Quay in Sarajevo, Bosnia and Herzegovina, on June 28, 1914?

Franz Ferdinand, heir to the throne of Austria-Hungaria, and his wife, Sophie, were making a visit to the city and had just missed an earlier assassination attempt. Instead of changing routes to protect the couple, the motorcade turned off the Appel Quay and onto Franz Joseph Street, as originally planned.

The driver put on the brakes and backed up to the front of the store, where assassin Gavrilo Princip was eating a sandwich. Princip pulled his gun and shot the couple in their car.
5. It was in this house at 45 Viena St. and Río Churubusco Avenue in the Coyoacán district of Mexico City that this famous person met his grisly end. Who was it?

The exiled Bolshevik revolutionary Trotsky was tried, convicted and sentenced to death in absentia in his native Russia of plotting to assasinate Josef Stalin. On August 20, 1940, that execution was finally carried out. Trotsky was attacked in the study of his Mexican home and stabbed in the head with a pick-axe by Ramon Mercader. Trotsky lingered for more than a day before dying from his wounds.
6. What U.S. President was shot at 511 Tenth Street, NW in Washington, DC?

The address of Ford's Theatre, where, days after the formal end of hostilities in the U.S. Civil War, President Lincoln was shot on April 14, 1865 (Good Friday) while watching a performance of 'Our American Cousin'. Lincoln was carried to a nearby boarding house where he died the next morning, the first U.S. President to be assasinated.
7. The house at 10050 Cielo Drive in Los Angeles, California was part of what dark chapter in Hollywood history?

The ill-fated house in Benedict Canyon was rented by director Roman Polanski and his wife, actress Sharon Tate. On the night of August 8, 1969, members of a reported 'family' led by Charles Manson descended on the house, butchering Tate (who was eight months pregnant at the time) and four other people, including coffee heiress Abigail Folger and hairstylist Jay Sebring (Polanski was out of the country at the time of the brutal killings).

The next night, Leo and Rosemary LaBianca were killed in their home miles away by the same group in the same grisly fashion.

The Polanski home was demolished in 1994, replaced by an Italian-style mansion and even a new address. Both have yet to sell.
8. What was said to have begun in Wilmer McLean's back yard and ended in his front parlor?

Wholesale grocer Wilmer McLean (1814-1882) actually owned two homes during the course of the War Between the States. The First Battle of Bull Run was fought July 21, 1861 on McLean's first farm, the Yorkshire Plantation, in Manassas, Prince William County, Virginia (Confederate General P.G.T. Beauregard used the home as his headquarters).

In 1863, McLean moved his family south to a new home in Appomattox Court House, Virginia. It was in the parlor of the second home that Confederate General Robert E. Lee surrendered the Army of Northern Virginia to Union General Ulysses S. Grant, ending the war.
9. We know the Beatles got their start in Liverpool before making the splash heard around the world called the first British Invasion. One segment of that history can be found at 10 Mathew Street in Liverpool. What is located there?

The famous underground club has played host to many groups like the Rolling Stones, the Kinks, the Yardbirds, and others and is still going strong today. Incidentally, the Star Club and the Kaiserkeller are also familiar Beatle haunts, but they're located in Hamburg, Germany.
10. The city of Munich, Germany has had its share of famous and infamous events. One began at an apartment complex at 31 Connollystraße, near the Olympic Stadium. What was it?

When Munich hosted the 1972 Summer Olympic Games, the city tried to put its best foot forward, but in the early morning hours of September 5, members of the Palestinian 'Black September' movement broke into the address, which housed members of the Israeli Olympic team.

By the end of the ordeal the next day, 17 people were dead, including all 11 Israeli athletes. There is now a memorial tablet to the slain Israelis outside the front door of their former lodging.
Source: Author Oddball 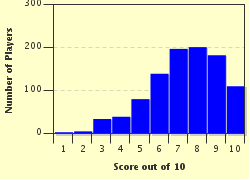 
Other Destinations
Explore Other Quizzes by Oddball