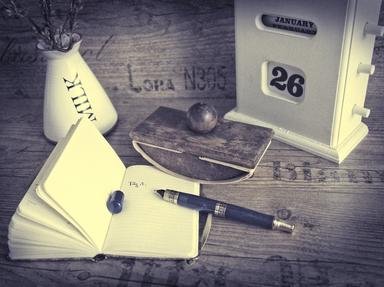 It's Back: Dating With a Twist! Quiz

Anachronisms are details which are in the wrong time-frame, e.g. fighter jets in 1775. Can you spot which of these statements are anachronisms? Have fun.

Roosevelt lived from 1858-1919. Levi Strauss invented jeans for the miners in California in 1873.
2. Which of these desserts could Napoleon have relished?

By the late 1600s ices and sherbets were popular in the outdoor cafes in Paris as a special treat.
3. Henry VIII of England could NOT have played 'Green Sleeves' on which of these instruments?

Henry died in 1547, the piano was perfected much later. The remaining three instruments were in use in Henry's day. Henry was an accomplished musician.
4. Stalin could NOT have played one of these games. Which of these is it?

Stalin died in 1953 while Rubik invented the cube puzzle in 1974. Dominoes dates from the early Middle Ages, Monopoly came into being in 1935 and Scrabble followed in 1948. Would Stalin have wanted to play Monopoly?
5. Which of these New York buildings could US President J F Kennedy NOT have visited?

Plans to build the World Trade Centre were announced in January 1964 and J F Kennedy was assassinated in 1963. The Pierpont Morgan Library dates from 1902-06, the Empire State Building was completed in 1931 and the NBC Studios in 1933.
6. Could Oscar Wilde have used a typewriter?

Christopher Latham Sholes patented what was to be the first useful typewriter. He sold his patent to Remington of New York in 1874 and they produced the first commercial typewriters. The earliest recorded effort to make a typewriter was by Mill in the UK in 1714. Wilde died in 1900.
7. Could Florence Nightingale have lit her famous lantern with a safety match during the Crimean War (1853-1856)?

Matches were invented before that war, they used white phosphorous on the tip and were actually poisonous. However, the safety match dates from 1892, when Joshua Pusey(USA) invented a matchbook. Diamond Match Company bought and improved his invention. The safety match was born. So in her later life Florence could have used a safety match as she lived till 1910.
8. Marilyn Monroe could NOT have watched which one of these movies?

Marilyn died in 1962 and 'The Sting' premiered in 1973.
9. Which of these events could Mussolini have cheered Italy on to win?

In 1934 the World Cup was held in Italy and Italy won. "Il Duce" was in power at the time.
10. Which of these inventions could Queen Victoria have bought for the kitchens of Buckingham Palace?

Much to my amazement the electric kettle dates from 1891, and that's ten years before Queen Victoria's death.
Source: Author Fiachra 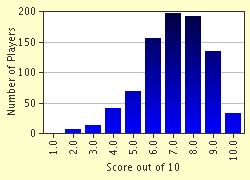 Related Quizzes
1. When the Year Ends in 13 Tough
2. A Calendar In Time Average
3. It Didn't Happen That Day Tough
4. Happy Tercentenary: the World in 1715 Difficult
5. When a Day Gets a Nickname Easier
6. The Year of the Ox Average
7. As the Century Turns Average
8. Dateline: 1783 Tough
9. History Never Repeats... Average
10. Happy Quadricenternary: the 1610s Average
11. Dateline: 1576 Difficult
12. Counting to Ten Average